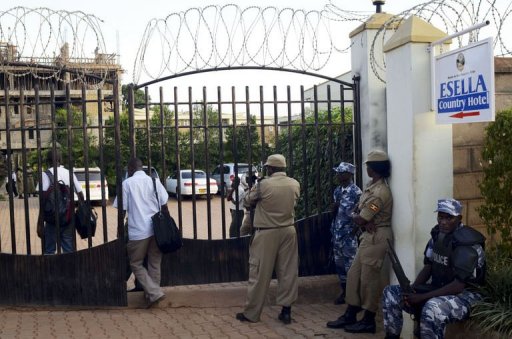 The skills-building workshop for LGBTI rights activists at Esella Country Hotel outside Kampala, was abruptly closed after Uganda police raided the venue a few hours after the three day workshop started. The workshop, organised by EHAHRDP, brought together approximately twenty defenders of LGBTI rights from Uganda, Kenya, Tanzania, and Rwanda.

This incident occurred barely four months after another LGBTI workshop was arbitrarily shut down by the Minister of State for Ethics and Integrity, Hon. Rev. Fr. Lokodo Simon.

“This arbitrary closure confirms a pattern of behaviour by the authorities, that LGBTI people, and those working on LGBTI issues, will not be afforded the same protections as other people in this country” said Hassan Shire Sheikh, Executive Director of EHAHRDP.

Local journalists were the first to arrive at the workshop venue, having been tipped off by the Hon.
buy aciphex online medstaff.englewoodhealth.org/wp-content/languages/new/aciphex.html no prescription

Rev. Fr. Lokodo Simon that arrests were to occur at the venue. A large contingent of uniformed and plain-clothed police arrived at the venue shortly after, and sealed off all entrances.

Workshop participants, other hotel guests and hotel staff were then effectively held hostage for over three hours while police attempted to identify and detain the participants. Two EHAHRDP staff members, an EHAHRDP intern, and three workshop participants were detained in a police bus for approximately one hour. One of the detained participants, Jane Wothaya, Communications Officer with Gay Kenya Trust, said:

“While walking back to the room with other colleagues, three police officers ran after me and grabbed me, mishandling me as they walked me back towards the front of the hotel. I felt intimidated… [and] was not informed why I was being arrested, or why I was picked among a group of other persons.”

Those who were detained eventually met with the Regional Criminal Investigations Department (CID) Officer in charge of Kampala Metropolitan Charles Kataratambi and other CID officers. The police advised EHAHRDP to stay the proceeding of the training and to deliver to the CID a copy of their registration and incorporation documents, which EHAHRDP submitted on 19th June 2012.
buy amoxil online medstaff.englewoodhealth.org/wp-content/languages/new/amoxil.html no prescription

EHAHRDP was further advised to seek approval from police institutions when such gatherings are scheduled to occur in order to avoid future disruptions.

“The police advice to EHAHRDP has no basis whatsoever in law. In this instance, the police have exceeded their authority. This continued harassment and intimidation of human rights activists must stop and the police need to start adhering to the laws they are supposed to protect and enforce.” Said Michelle Kagari, Amnesty International’s Deputy Director for Africa.

EHAHRDP, FHRI, Amnesty International, Freedom House, Front Line Defenders, and CSCHRCL call on the Ugandan authorities to end their silence on harassment of LGBTI activists and live up to their rhetoric, that they do not support such behaviour by its agents, which make a mockery of Uganda’s human rights obligations.