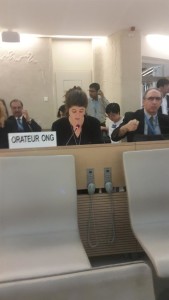 The East and Horn of Africa Human Rights Defenders Project welcomes this interactive dialogue, and the report of Mr. Kaye on the use of encryption and anonymity in digital communications. Similarly, we welcome Mr. Kiai’s report on the right to peaceful assembly and association, focusing on the context of natural resource exploitation.

Mr. President, our organisation is extremely concerned with the developing trend in our sub-region, whereby States increasingly focus the discussion about encryption and online anonymity on their potential use for terrorist or criminal activities. In Ethiopia, nine journalists and bloggers have been detained since April 2014 for exercising their right to freedom of expression, including the use of entirely lawful digital encryption technologies.

We echo Mr. Kaye’s words in reminding States that ‘so-called’ emergency situations do not relieve them of the obligation to ensure respect for international human rights law.

We also welcome the report of Mr. Kiai, focusing on legislation and practices concerning natural resource exploitation. Mr. Kiai, in your report you refer to our own organisation’s research, documenting the numerous human rights defenders in Uganda and Tanzania who have been subject to attacks, stigmatisation, intimidation, surveillance, and travel bans. Many organisations risk the suspension of their activities when they speak out against natural resource exploitation.

Finally Mr. President, we echo Mr. Kiai’s words, in calling upon States to take measures to ensure that all individuals, including human rights defenders working in the context of natural resource exploitation are able to effectively exercise their rights, including the rights to freedom of assembly and association.