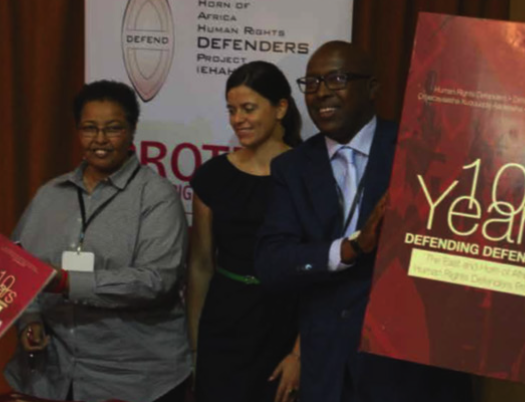 It’s been over ten years since I had to flee my country and found a safe haven in Canada. Forced to leave my native Somalia because of my work, I had to fly halfway around the world, far from my colleagues, family, friends and work to find safety. Today, against the backdrop of the European refugee crisis and the multiple crises, conflicts an crackdowns taking place in the sub-region, it is more important than ever that human rights defenders find a safe and hospitable place to get rest and respite and continue their work.

Despite our achievements, 2015 was a stark reminder that human rights defenders (HRDs) and civil society remain extremely vulnerable in the East and Horn of Africa. In February 2015, DefendDefenders (the East and Horn of Africa Human Rights Defenders Project) published a report warning that Burundi was rapidly approaching a turning point in its history as a democratic country, highlighting Burundian civil society’s extremely precarious position.

Sadly, the decision by President Pierre Nkurunziza to seek a third term in office and the subsequent crackdown as Burundi citizens took to the street in protest has been devastating to civil society. Within less than a year, one of the most vibrant communities of HRDs on the African continent was all but destroyed.

Human rights defenders have a vital role to play in nation building and in the development of a healthy democratic society. As the governments in the sub-region increasingly turn towards authoritarianism and repression to preserve and tighten their grip on power, the working environment of human rights defenders becomes both hostile and dangerous.

Our flagship Protection program remains the pillar of our work, providing life-saving assistance to HRDs most at risk. In 2015, they did exemplary work under extremely difficult conditions. With the gradual but rapid deterioration of the situation in Burundi throughout the year, they have reacted swiftly and professionally to the overwhelming number of cases of human rights defenders at risk. I am proud to say that we were able to provide 114 protection grants to HRDs and two to civil society organisations. Although we assisted HRDs from twelve different countries, Burundians made up 20 per cent of our protection cases in 2015.

Our Advocacy and Research programme continued to work towards promoting and raising the voices of human rights defenders at national, regional, and international forums. Delegations comprised of staff and HRDs attended all sessions of the United Nations Human Rights Council in Geneva, and the African Commission on Human and Peoples’ Rights in Banjul, to attempt to influence the narrative and ensure the protection and promotion of civic space and the work of human rights defenders in their country.

We conducted research into the trends and patterns affecting HRDs in the sub-region and, to build on our work on Burundi, launched “Caught up in Bitter Contests”, an analysis of the working environment of HRDs ahead of, during and after elections in September 2015.

As access to technology and Internet has grown across the sub-region, so has our ICT department. The rapid development of the digital world has created new possibilities for HRDs to do their work more effectively. However, they can now also have their data as well as their online and offline security compromised by actors half a world way. DefendDefenders is on the cutting edge of equipping HRDs with the new skills and tools they need to protect themselves and our team’s expertise is increasingly sought after, both inside and outside the sub-region.

The Capacity Building department organised numerous trainings and follow-up visits, reaching over 600 HRDs directly. By supporting the development of new and existing National Coalitions for Human Rights Defenders and by hosting events such as consultations for a model law on the protection of HRDs, the team continued to build stronger structural protection mechanisms in the East and Horn of Africa.

Meanwhile, DefendDefenders also looked outside its geographical boundaries. The Pan-African Human Rights Defenders Network connects HRDs from five sub-regions on the continent, for example through its annual Pan-African Shield Awards, recognising the contributions of civil society and encouraging HRDs to continue with their invaluable work.

Despite the challenges we face, looking back at what we have achieved over the last decade, I am optimistic. DefendDefenders has grown into a mature organisation that has proven itself capable of providing quick and effective responses if needed. Together with our partners and donors, we will continue this vital work.

No matter the adversity they may experience, HRDs from all walks of life continue to speak out and claim their fundamental rights. Their perseverance is an inspiration to all of us at DefendDefenders and, witnessing this on a daily basis, I am confident they will contribute to build a peaceful future for the East and Horn of Africa.