Open Letter concerning excessive use of force by Sudanese authorities 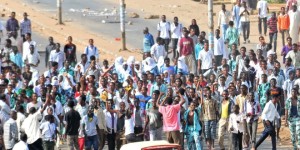 To: African Commission on Human and Peoples’ Rights (ACHPR)

UN Special Rapporteur on the rights to freedom of peaceful assembly and of association, Mr. Maina Kiai

Re. Open Letter concerning excessive use of force by Sudanese authorities

We, the undersigned thirty nine organizations and individuals, are writing to inform you of the use of excessive force by Sudanese authorities to disperse peaceful demonstrators across Sudan. At least nine people, including one child, have been killed in three separate incidents in 2016 alone. Most recently, two students were killed in separate incidents in April, in which government security forces and armed students used live ammunition to break up protests at two university campuses.

We are concerned that government forces will continue to use excessive force against protesters and to arbitrarily detain those who participate in them as they have done repeatedly since 2011.

The April incidents are the latest examples of an ongoing pattern of abuse. In September 2013 government forces used live ammunition to break up peaceful protests, killing more than 170 protesters. They also detained at least 800 protesters without charge during the crackdown in late September and early October and subjected many to ill-treatment in detention.

There has been little or no accountability for the deaths, injuries and various other abuses perpetrated by Sudanese authorities against protesters. A patchwork of legal immunities effectively shields government forces from criminal prosecution and accountability.

We, the undersigned Sudanese and international civil society organizations, condemn these unlawful killings and other abuses by government and allied forces. We urge you to reiterate to the Government of Sudan that all Sudanese have the right to freedom of expression, association, and assembly.

Killing of two students, and injury to dozens more, in demonstrations in North Kordofan and Omdurman in April 2016

On 19 and 27 April, two students were killed in two separate incidents in which government forces used live ammunition to disperse demonstrations on two university campuses.

The attack began when the National Intelligence and Security Services (NISS), intercepted a group of students marching peacefully towards the Student Union to submit a list of pro-opposition candidates for student union elections that day. The NISS agents, using AK47 rifles and pistols, fired into the crowd. In the following days students demonstrated at universities across the country protesting Mr. Hassan’s death.

Three other students were injured when alleged security forces in plainclothes attacked the students at the forum with iron batons and forced them out the main gate of the University. After some students had crossed the street, NISS officers fired at them, shooting Mr. Wayo in the chest. Mr. Wayo’s death certificate is attached.

The two killings took place amidst a wave of student demonstrations, beginning with protests at the University of Khartoum on 13 April 2016 over rumours that the main campus would be moved following the sale of campus land to investors. Amnesty International reported that five student activists from the University of Khartoum were detained without charge after being arrested by the NISS on 13 and 14 April 2016. Two students were released without charge on 23 April, with a third student released and charged under article 182, ‘Criminal Damage’ of the 1991 Sudanese Penal Code. A fourth detainee was released on 2 May 2016. The fifth detainee, Ahmed Zuhair, (m), remains detained by the NISS.

Killing of protestors, including a child, at demonstrations in West Darfur in January 2016

The recent killings form part of a larger pattern of the use of violence to suppress freedom of expression, association, and assembly across the country.

Earlier this year, on 10 January 2016, at least seven people, including one child, were killed when security forces opened live ammunition at a crowd of protestors outside the West Darfur state governor’s office. The crowd had gathered to demand protection after the nearby village of Mouli was looted and burned to the ground. The following day, three people were killed and seven others sustained gunshot wounds when security forces again fired live ammunition at the funeral for the deceased.

An unknown number of detainees remain in NISS custody following arrest during student demonstrations in April 2016. We are concerned for the safety and well-being of all detainees held by NISS, particularly youth activists. In the past, our organisations have documented a number of incidents of arbitrary arrest and detention in conjunction with protests on Sudan’s University campuses. More than 800 people were detained during the crackdowns on protests in September and October 2013.

In another example, three youth activists from the University of Khartoum  were detained without charge or access to a lawyer for three months, from 12 May – 11 July 2014. They were detained after a Darfuri student Ali Abaker Musa Idris, (m), was killed on 11 March 2014 as Sudanese forces opened fire during a demonstration organized by the Darfur Students’ Association condemning escalating violence in Darfur. Two of the detainees reported being subjected to ill-treatment during their detention. The group was only released when they signed a document pledging to no longer partake in political activities.

Lack of accountability for deaths of students

We are concerned that the recent killings of Mr. Hassan, Mr. Wayo, and the civilians in January in Darfur, will go unpunished. A culture of impunity exists in Sudan due to legal immunities that effectively shield NISS, the police, and the army from prosecution.

During the September 2013 anti-austerity protests, Sudanese security forces fired live ammunition to disperse protestors. Although human rights groups documented that more than 170 were killed, many because of gun-shot wounds to the chest or head, Sudanese authorities have acknowledged just 85 deaths.

Out of at least 85 criminal complaints pursued by victims’ families, only one progressed to court. The murder conviction of the accused, a Sudan Armed Forces officer, was overturned on appeal. Human rights defenders and victims’ rights groups calling for justice and accountability for the 2013 protest killings have been subjected to arbitrary arrests and harassment.

Sudan should immediately put an end to persistent the human rights violations committed by its police and security services, remove provisions that provide them with broad powers of arrests and detention, and repeal immunities protecting them from prosecution. We urge all concerned actors to exert strong and effective pressure on the Sudanese government to halt its ongoing campaign of arbitrary arrest and detention and excessive use of force to silence dissenting voices.

We also call for the following urgent steps to be taken to ensure justice and accountability regarding the crimes outlined above: