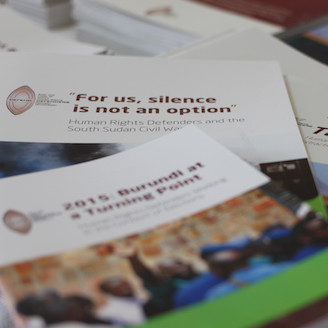 ACHPR59: Statement on the report of the Special Rapporteur on human rights defenders

59th Ordinary Session of the Africa Commission on Human and Peoples’ Rights
Banjul, Islamic Republic of the Gambia

On behalf of the East and Horn of Africa Human Rights Defenders Project, I would like to thank the Commission for this opportunity to raise some of the key challenges facing human rights defenders in the East and Horn of Africa. Governments in the sub-region continue to restrict legitimate expressions of dissent, individually and collectively, online and offline, through repressive legislation, physical attacks, enforced disappearances, arbitrary arrests and harassment.

Since the beginning of the crisis in Burundi, the deliberate and often-violent targeting of human rights defenders and journalists has resulted in the deaths and serious injury of several activists. Most human rights defenders now work from exile, while those who remain in the country face one of the most restricted and dangerous working environments in the sub-region.

Burundi is shying away from its international obligations and from scrutiny, and with few to no human rights defenders left to monitor the human rights situation in the country, the African Union’s human rights observers have never been more important.

In Ethiopia, authorities have responded to continued protests in the Oromia and Amhara regions with the use of excessive and lethal force, resulting in reports of hundreds of protesters killed and tens of thousands arrested. Restrictions on fundamental freedoms have directly impacted the ability of journalists, bloggers, and human rights monitors and activists to conduct work on the protests. The recent declaration of a State of Emergency reinforces worrying restrictions on fundamental and non-derogable rights, and risks weakening further Ethiopia’s already fragile civil society.

In July and August, four members of the Human Rights Council (HRCO), one of Ethiopia’s only human rights organisations, were arrested and detained in Amhara and Oromia regions due to their work on monitoring and documenting the on-going crackdown against protests. In October 2016, Seyoum Teshome, a university lecturer and blogger known for his commentary on the Oromo protests was arrested and remains in detention.

While we welcome South Sudan’s recent ratification of the African Charter on Human and Peoples Right, we remain extremely concerned with the intensification of attacks on freedoms of expression and association in the aftermath of renewed fighting in Juba in July 2016. At least seven journalists have been detained or arrested by National Security and Military Intelligence agents, and two have been killed since April. Numerous HRDs have been forced to flee the country, including after attending a UN Security Council meeting in September.

The NGO Bill and the Relief and Rehabilitation Commission Bill were both signed into law amid concerns that they contained provisions contrary to international norms and NGOs must renew their certificates in accordance with these laws.

The East and Horn of Africa Human Rights Defenders Project offers the following recommendations for action by African Commission on Human and Peoples’ Rights: