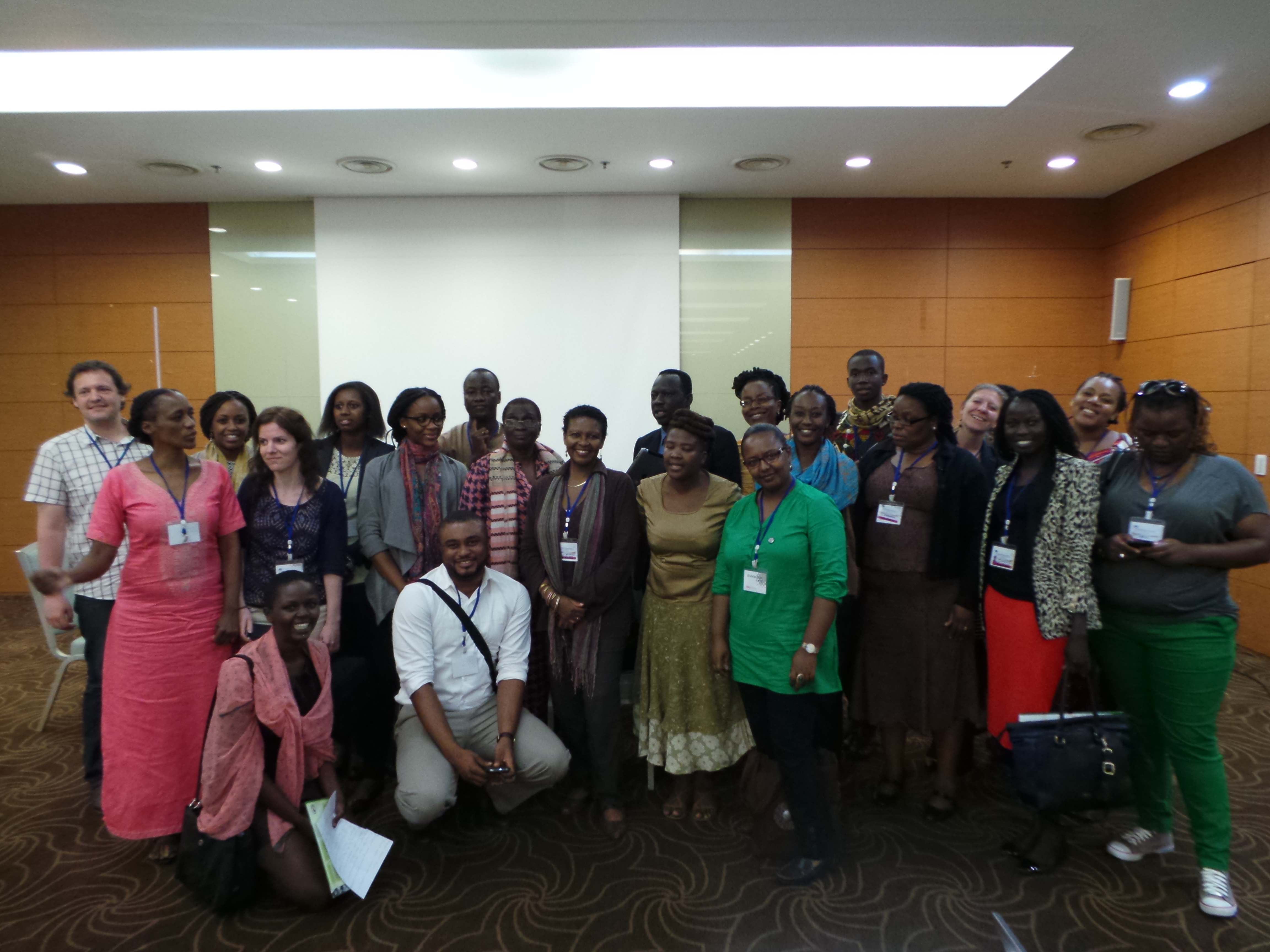 After my team’s recent mission to the 55th Ordinary Session of the African Commission on Human and Peoples’ Rights (ACHPR) in Luanda, Angola, and following publication of the ACHPR’s most recent Resolutions late last week (some of which I consider truly landmark), I write to provide my own personal reflections on some of the recent achievements made by the ACHPR, and by my team at the East and Horn of Africa Human Rights Defenders Project (EHAHRDP), and the Pan-African Human Rights Defenders Network (PAHRDN).

For nearly three decades, the ACHPR has been tasked with overseeing human rights across the continent- a task that is occasionally daunting in its scope. Since EHAHRDP’s inception, our team has consistently engaged at its biannual sessions and at the preceding NGO Forum. EHAHRDP has supported human rights defenders to raise their concerns at the regional level, advocated directly for enhanced protection mechanisms for human rights defenders, and encouraged civil society activists from across Africa to meet, exchange experiences and ideas, and collaborate.

Three progressive and timely resolutions were adopted by the ACHPR following its 55th Ordinary Session. These resolutions advance protection for human rights defenders across the continent, and provide an insight into its growing importance as a regional human rights body.

Firstly, Resolution 273 expands the scope of the mandate of the Special Rapporteur on Human Rights Defenders to include monitoring, documenting, and reporting on reprisals against human rights defenders who engage with the African human rights system.

Acts of reprisals against human rights defenders are garnering increased international and regional attention and condemnation. In September 2013, the UN Human Rights Council adopted Resolution 24/24, which acknowledged the scale of problem facing human rights defenders, and urged states to enact laws to guarantee their protection.
Resolution 273 is therefore both timely, and vital. Human rights defenders who speak on international stages against human rights violations in their own countries are often subject to harassment, intimidation, arbitrary arrest, and worse when they return home. This Resolution marks a welcome move towards acknowledging, and ultimately addressing this worsening problem at the African level.

Secondly, the ACHPR adopted Resolution 281 on the right to peaceful demonstrations. In the context of increasing legal and de facto restrictions on the right to peaceful assembly across the continent (and certainly in this sub-region), I was encouraged to see the ACHPR express its concern regarding excessive use of force by state security forces, and the mass and arbitrary arrests of peaceful participants.

Thirdly, the ACHPR adopted a landmark resolution condemning all human rights violations, including systemic attacks by state and non-state actors, against persons on the basis of their real or perceived sexual orientation or gender identity. Resolution 275 specifically acknowledges the rights of human rights defenders working on these issues across Africa.

The fundamental human rights of persons of ‘minority’ sexual orientation or gender identity is frequently framed as being a contentious issue in Africa. In fact, it is not. Resolution 275 demonstrates the true extent of a pan-African consensus on the protection of these rights, and how ‘out of step’ those countries who try to limit or legislate against these rights, truly are.

I welcome these progressive moves from the ACHPR, but I highlight as always that there needs to be similar moves at the national level by all state parties to the African Charter.

The biannual NGO Forum was held from 24th to 26th April, immediately prior to the 55th Ordinary Session of the ACHPR. Once again, human rights defenders and civil society organisations from across the continent came together to collaborate, strategise, and form valuable partnerships.

On 24th April, EHAHRDP’s Advocacy & Research Officer, John Foley, delivered a statement on the human rights situation in Africa , and participated in an interactive panel discussion with representatives of other sub-regional human rights networks.

EHAHRDP observed in its statement that regressive legislation has recently been passed across many countries in the sub-region, curtailing citizens’ rights to free expression, freedom of association, and freedom of peaceful assembly. EHAHRDP reported that administrative and bureaucratic obstacles are increasingly being used by governments to disrupt the work of human rights defenders and journalists.

On 26th April, Neil Blazevic, Research and Information Management Officer with PAHRDN and EHAHRDP participated in a panel on freedom of expression, convened by Article 19’s East Africa team. He presented a paper on behalf of the Zimbabwe Human Rights Forum on the protection of online freedom and privacy.

EHAHRDP and PAHRDN were also part of a consultative meeting of the Study Group on Freedom of Association and Assembly held on 27th April 2014. By way of background, in 2009 the ACHPR initiated a study on the laws governing freedom of association and practices that violate freedom of association in Africa. The Study Group, comprised of EHAHRDP and seven other NGOs and supported by PAHRDN, presented its final report at this session of the ACHPR, who adopted the report during its private deliberations. 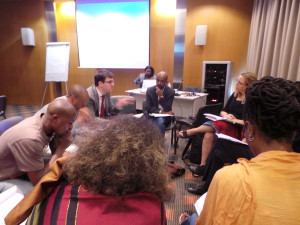 The report was always conceived as a precursor to developing a set of practical guidelines on these issues. The consultative meeting was an opportunity for interested stakeholders to discuss the draft guidelines on freedom of association, and map out the next steps for the Study Group following the adoption of the report by the ACHPR.

On the same day, PAHRDN’s co-ordinator Joseph Bikanda attended a consultative meeting between special procedures mandate holders of the UN and the African Commission on Human and Peoples Rights to review the Addis Ababa Roadmap. In 2012 the special procedures of the UN Human Rights Council and of the ACHPR adopted the Addis Ababa Roadmap with the main objective of strengthening cooperation between the two human rights mechanisms. 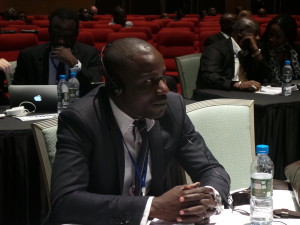 EHAHRDP AND PAHRDN at the 55th Session of the ACHPR 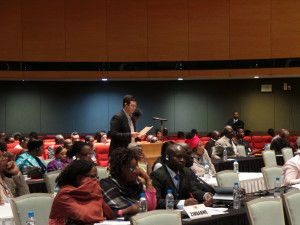 At the outset of the 55th Ordinary Session, EHAHRDP presented a detailed written report to the Commission, outlining human rights concerns from across all eleven countries in the sub-region.

On 29th April, EHAHRDP delivered a statement on the situation of democracy and human rights in Africa stating that in most countries in the East and Horn of Africa sub-region there were renewed government clampdowns on fundamental human rights, and the targeting through various means of human rights defenders (HRDs) working on the front lines of human rights protection.

The Special Rapporteur on the Situation of Human Rights Defenders presented her report at the ACHPR, and EHAHRDP responded in an oral statement calling for member states to ensure the protection of human rights defenders, and for an end to all practices, notably legal restrictions, which threaten fundamental rights contained in the Charter which are vital for the work of human rights defenders.

We also delivered a statement following the report of the Special Rapporteur on Freedom of Expression and Access to Information in Africa stating that journalists, human rights defenders, and others exercising their fundamental right to free speech in the east and horn of Africa sub-region have increasingly been subject to targeted administrative and bureaucratic obstacles by governments as a means to disrupt their work. EHAHRDP further called for an end to all practices, notably legal restrictions, which threaten fundamental rights contained in the Charter, including in particular the freedom of expression; and condemned, in the strongest terms, the recent clampdown on freedom of expression in Ethiopia.

On the margins of the ACHPR, EHAHRDP was delighted to be involved in co-sponsoring an evening event to discuss the ACHPR’s recently adopted report on Women Human Rights Defenders. The event was chaired by Honourable Commissioner Reine Alapini Gansou, the Special Rapporteur on the situation of Human Rights Defenders in Africa, with representatives from many members of the Study Group that contributed to the study. 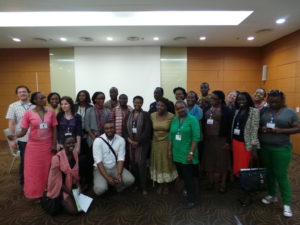 Dear Comrades and Friends, 2021 was a busy year for