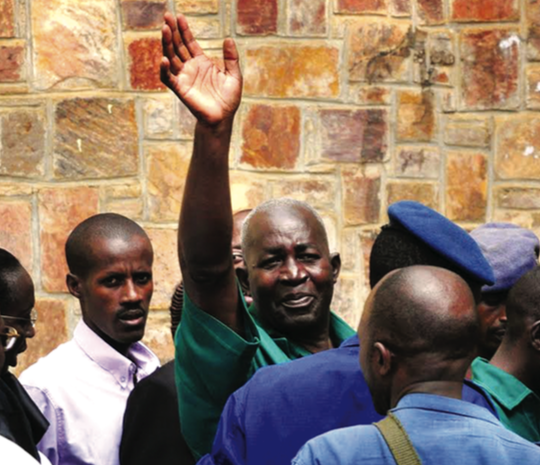 Human Rights Defenders in Burundi are operating in one of the most restrictive and hostile environments in East Africa, finds a new report published today by the East and Horn of Africa Human Rights Defenders Project (EHAHRDP). The 56 page report, entitled “2015: Burundi at a Turning Point” documents an alarming pattern of harassment, intimidation, threats, and legislative reforms, all targeting Burundian human rights defenders.

The report details extensively how the relationship between civil society and Burundian state authorities has dramatically deteriorated during the course of 2014. State authorities increasingly portray human rights defenders, journalists, and other members of civil society as being ‘enemies of the state’, and routinely claim that legitimate criticism of the government’s practices stems from an affiliation to the political opposition. Numerous attempts have been made by the government to discredit independent civil society voices, as well as to stifle the activities of human rights defenders through overt harassment and intimidation.

“Human rights defenders in Burundi are now operating in what is effectively a de facto hostile state for human rights activism”, said Hassan Shire, Executive Director of EHAHRDP. “In the run up to the elections scheduled for May, this report paints an extremely worrying picture, and should be a source of grave concern to Burundi’s regional neighbours, the East African Community, as well as its international development partners and the wider international community”.

The report finds that Burundian journalists have borne the brunt of some of the most severe attacks from the government. At least five journalists have been subjected to legal actions since April 2014 and asked to reveal their sources. Several human rights defenders have been exposed to legal harassment, whereby they are repeatedly summoned to court for no particular reason. Just a few days ago, Burundian authorities arrested and detain Bob Rugurika, the director or Radio Publique Africaine (RPA), following RPA’s broadcast of a series of investigative reports into the September 2014 murderers of three Italian nuns in the country. EHAHRDP calls for his immediate release.

“Over fifty human rights defenders were interviewed in the course of this research”, said Clementine de Montjoye, who worked with EHAHRDP throughout 2014 as the author and primary researcher of the new report. “Across the board, we found that human rights defenders from all areas of civil society are routinely exposed to threats and intimidation, and that this situation has markedly deteriorated throughout the course of 2014. This is extremely concerning, less than four months away from elections”.

In the new report, EHAHRDP sets out a number of concrete recommendations to the Government of Burundi and its international partners to improve the operating environment for human rights defenders, and ensure their safety.