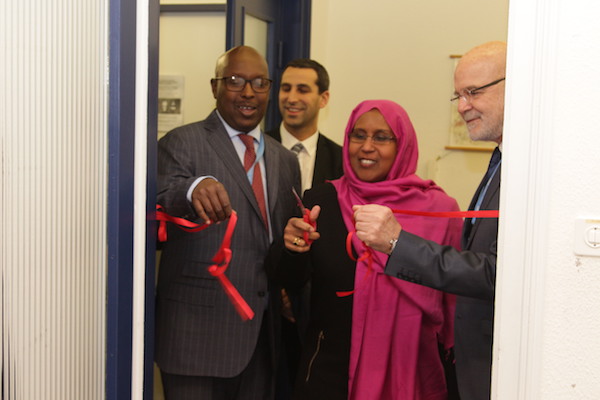 Almost six years after acquiring special consultative status with the United Nations (UN) Economic and Social Council, DefendDefenders (the East and Horn of Africa Human Rights Defenders Project) is proud to announce the establishment of a permanent representation in Geneva. During a celebratory reception on 2 March, the office was officially opened by H.E. Fatuma Abdullahi Mohamud, the Somali Permanent Representative to the UN in Geneva and Michel Forst, UN Special Rapporteur on the situation of human rights defenders. DefendDefenders’ Representative to the UN will facilitate the organisation’s engagement with the UN human rights mechanisms on issues relevant to human rights defenders (HRDs).

Strategic advocacy has proven essential to mitigate the risks that HRDs in the East and Horn of Africa face on a daily basis. Since its founding in 2005, DefendDefenders, which also serves as the secretariat of the Pan-African Human Rights Defenders Network (PAHRDN), has supported HRDs from all over Africa to attend sessions of regional and international human rights mechanisms, where they engage with key stakeholders, decision makers, and duty holders on pressing human rights issues in the sub-region.

“The launch of our Geneva office is a milestone in the development of DefendDefenders and PAHRDN,” said Executive Director Hassan Shire at the official launch today. “This permanent presence enables us to engage more effectively with the UN Human Rights Council (UN HRC), its mechanisms, and the Office of the High Commissioner on Human Rights. It is another important step towards ensuring that the voices of HRDs from the East and Horn of Africa are heard at one of the world’s premiere human rights forums.”[/vc_column_text]

The human rights situation in the East and Horn of Africa remains extremely precarious, something that is reflected in the actions of the UN HRC. The mandate of two out of only five of Commissions of Inquiry ever to be established by the UN HRC covers countries in the sub-region. Both the Commissions of Inquiry on Eritrea and Burundi found that there are reasonable grounds to believe that crimes against humanity have been, and continue to be committed, in these respective countries.

Meanwhile, the current mandates of the Commission on situation of human rights in South Sudan and the Special Rapporteur on the situation of human rights in Eritrea continue to fulfil an invaluable role in documenting ongoing violations and exploring avenues of future accountability. Other special mechanisms, most notably the Special Rapporteurs on human rights defenders, peaceful assembly and association, and freedom of expression, have provided invaluable support as we endeavor to strengthen the work of HRDs.

DefendDefenders remains committed to its core mandate of providing emergency support to HRDs from the sub-region facing immediate risk. With the establishment of our Geneva office, we endeavor to move one step closer to a world where HRDs can carry out their legitimate work safely, and without fear of reprisals.