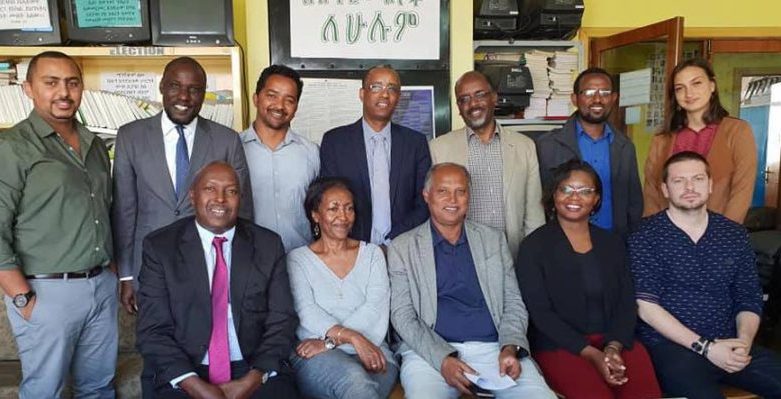 The appointment of Dr. Abiy Ahmed as Prime Minister of Ethiopia comes with increasing reforms in the country, including opening up of civic space. Taking advantage of this opportunity, a delegation from DefendDefenders (the East and Horn of Africa Human Rights Defenders Project) and AfricanDefenders (the Pan-African Human Rights Defenders Network) visited Addis Ababa, Ethiopia,  from 22 January to 1 February 2019, to meet with key stakeholders, share analysis on the national human rights situation and identify avenues for future cooperation.

We highly welcome the positive and progressive human rights developments that have taken place in Ethiopia over the past year, including the release of political prisoners, the closing of Maekelawi prison- notorious for torture, and the lifting of the state of emergency. Moreover, we encouraged the government to continue the implementation of its reform agenda in a transparent and participatory manner. Therefore,our visit marked a historical moment for DefendDefenders and AfricanDefenders, as we had the opportunity to openly discuss human rights issues with a wide range of actors, including HRDs who were recently released after being unjustly detained, or who returned to Ethiopia for the first time after years in exile.

One of our key meetings was with the Ethiopian Human Rights Council (EHRCO), one of the oldest human rights organisations in Ethiopia, which, despite many difficulties, managed to continue monitoring and exposing human right violations. During the meeting, we exchanged ideas on the current status of human rights and civic space in the country, we learnt about their human rights work, their resilience strategies, and plans for the future. We hope that, in the context of the recent reforms, they will be able to reopen their offices across the country (which they were previously forced to close), as it is crucial not to lose sight of the needs and grievances of different regions, to ensure that the rights of all Ethiopians are upheld.

We also had the opportunity to exchange information and analysis, and discuss potential synergies, with many other actors. This included the African Governance Architecture (AGA), the section of the African Union that focuses on the promotion of good governance and democratic values, as well as with the Regional Office for East Africa of the Office of the High Commissioner for Human Rights (OHCHR). In addition, we also visited the Ethiopia Somali region, where Mustafa Omer has been appointed regional President after years in exile. We hope that Omer’s announcements that he will focus on restoring respect for human rights will bring peace and justice to a region characterised by a tumultuous history marked by repression and displacement.

One of the most memorable moments of our visit was a networking reception which we organised for Ethiopian HRDs, many of whom had been forced into exile, and unable to see their families for years. Bringing all of them together in Addis Ababa was an unforeseeable event that brought joy, hope, and a renewed commitment to continue to promote and protectr human rights in Ethiopia.

To close the mission, we took part in an expert meeting workshop co-organised by the Association for Human Rights in Ethiopia (AHRE) and the Consortium of Ethiopian Rights Organisations (CERO) with funding from the European Union (EU) on the theme “(re-)building a strong civil society in Ethiopia”. The workshop brought together HRDs, civil society representatives, lawyers and journalists, as well as  regional and international organisations, to take stock of the current situation and to identify opportunities for cooperation for the advancement of human rights in the country. The energy and commitment of the participants was inspiring, as well as their diverse experience and skills. I believe that by harnessing all this potential, we can build a truly effective network for the promotion of human rights in Ethiopia.

During the visit, we gained a clearer picture of the ongoing legal reforms and human rights situation, and we were happy to learn that civil society is actively engaged in the process. Particularly, the new Civil Society proclamation was discussed in Parliament during our mission, and we are happy to learn that it was adopted on 5 February 2019. We hope that this law will allow a diverse civil society to flourish. For an effective opening of civic space, it will also be crucial for the Ethiopian government to amend  the anti-terrorism proclamation and the mass media proclamation to allow for the existence of a free and independent press.

Ethiopia will be DefendDefenders’ focus country in 2019, with several activities planned to further strengthen the work of HRDs in the country. These include a report on the state of HRDs in Ethiopia, and holding our annual flagship event, “Claiming Spaces: Tactical tools for Human Rights Defenders”, in Addis Ababa. Additionally, we are committed to support the establishment of a national coalition for HRDs in the country, which we find immensely important to promote and protect the work of HRDs.

Looking back, I remember the first contacts I had with Ethiopian HRDs, and the difficulties we went through. Being able to come together with the same HRDs to talk about human rights, not in Brussels or Geneva, but in Addis Ababa, is a symbol that the tireless work conducted by Ethiopian HRDs over the years is bearing fruits, which generates commitment and optimism that we can further nurture. However, our work is starting now. The efforts of all of us – from international organisations to grassroots HRDs from all corners of Ethiopia – is essential to ensure that civic space continues to open up, and that all Ethiopians can raise their voice, without fear, for the protection and promotion of human rights.