On 1 March, civil society leaders from across the globe met with UN Secretary-General Ban Ki-moon on the side-lines of the High Level Segment of the 31st Session of the United Nations Human Rights Council, to discuss pressing issues affecting human rights defenders worldwide. Civil society leaders were able to raise crosscutting human rights challenges including shrinking civic space, elections, reprisals, and drug policy and human rights, as well as countries of concern such as Burundi, Egypt, Burma, Sri Lanka and South Sudan. 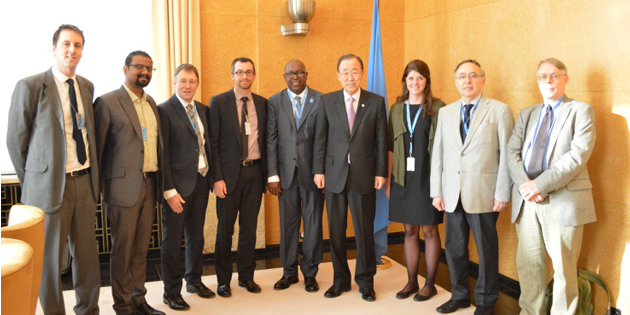 The Secretary-General congratulated civil society for the strong voice they provide to under-represented populations, and encouraged constructive criticism of the UN, which is essential to its growth and improvement. He spoke of the 2013 Human Rights up Front initiative, which aims to ensure that the UN system takes early and effective action, as mandated by the Charter and UN resolutions, to prevent or respond to large-scale violations of human rights or international humanitarian law.

He reiterated his commitment to civil society, and the need to bring together the three pillars of the UN: peace, security and human rights.

Civil society in turn thanked Mr Ban Ki-moon for his continued support of civil society, and for spearheading the Human Rights up Front Initiative.

They discussed the urgent need for a concerted and coordinated United Nations response to reprisals, and the importance of increasing the involvement of civil society at the UN. Mr Hassan Shire, Executive Director of DefendDefenders (East and Horn of Africa Human Rights Defenders Project) raised the grave threat to civil society that elections continue to present across the East and Horn of Africa, as leaders refuse to respect constitutional term limits and attempt to cling on to power. Mr Shire also raised the Secretary-General’s visit to Burundi, and highlighted the importance of obtaining guarantees that political opposition, journalists and civil society will be able to return to the country and will be allowed to work safely and independently.

We wish Mr Ban Ki-moon a fruitful and successful last year of his mandate, and thank him for his strong contributions to human rights over the course of the last 9 years.