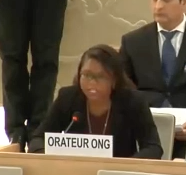 HRC34: Interactive Dialogue with the Special Rapporteurs on human rights defenders and on the prevention of torture

Item 3: Interactive Dialogue with Special Rapporteurs on Human Rights Defenders and on the prevention of torture

The East and Horn of Africa Human Rights Defenders Project welcomes the reports of the Special Rapporteurs on human rights defenders and the prevention of torture.

First, we would like to express our sincere gratitude to Mr.Michel Forst for his dedication and hard work over the course of his first term as Special Rapporteur. He has strived to reach the most at risk and isolated defenders, including the East and Horn of Africa, which I can only applaud.

My organisation has also recognised and focused on the particular risk faced by human rights defenders working on LGBTI issues, women and environmental defenders. Mr. President, we remain concerned that in Tanzania human rights defenders who challenge the violation of land rights, civil and political rights, LGBTI rights, are regularly targeted by the state through arbitrary detention, judicial and administrative harassment, reprisals, and office raids.

Similarly Mr. President, I welcome the report of the Special rapporteur on the prevention of torture, and particularly his serious warnings regarding increasing trivialisation of torture and other cruel, inhuman or degrading treatment or punishment, and the promotion and incitement of its use in the name of national security and the fight against terrorism.

Mr. President, we are particularly concerned with excesses taking place during states of emergency. Indeed, invoking special powers and the threat of terrorism to facilitate the deprivation of liberty and derogate from both regional and international obligations represents a dire threat to human rights defenders and citizens around the world, including in Ethiopia today. Tens of thousands of Ethiopian citizens have been arrested since the state of emergency was declared in October last year, without respect for due process, and we are extremely concerned about the many reports of ill treatment and torture we have received from former detainees.

Mr President, we urge the Council to adopt a resolution extending the mandates of both Special Rapporteurs for a further three years.