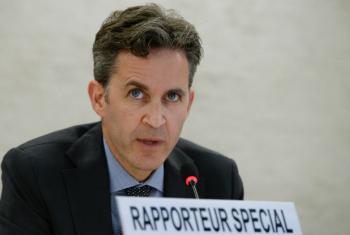 HRC38: Interactive Dialogue with the Special Rapporteurs on summary executions and on freedom of expression

DefendDefenders (the East and Horn of Africa Human Rights Defenders Project) welcomes the reports of the Special Rapporteurs on extrajudicial, summary or arbitrary executions, on armed non-State actors, and on the right to free­dom of opinion and expression.

We agree with you on the principle that any framework for the moderation of content, inclu­ding online, must be human rights-based. We are concerned that legitimate discourse is in­crea­singly targeted, including through requests for pre-publication monitoring and fil­tering on online platforms such as forums and blogs. We will deliver further remarks on the situ­a­tion in Tanzania under another agenda item.

Governments across the East and Horn of Africa have sought to restrict legitimate expres­sion. For instance, in Kenya, on 26 March 2018, jour­nalists from several media houses were threat­ened and beaten at Jomo Kenyatta Interna­tional Airport while attempting to cover the return of opposition figure Miguna Miguna. This incident follows the suspension, on 30 Jan­uary 2018, of three TV stations and several local ra­dio stations after they reported on the unofficial swearing-in of then-opposition leader Raila Odinga. By 9 February, all stations were again available on free-to-air platforms, but the incident had a chilling effect.

In the self-declared Republic of Somaliland journalists, artists, and media professionals have been harassed. On 6 March 2018, poet and peace activist Naema Qorane was charged with spreading “unpatriotic propaganda” via Facebook, where she allegedly promoted the idea of a united Somalia. On 15 April, she was sentenced to three years in jail on charges of “anti-national activity of a citizen and bringing the nation or state in contempt,” and later pardo­ned.

In South Sudan, the Media Authority suspended UNMISS-operated Radio Miraya for a alle­ged­ly failing to comply with national media laws. On 19 April, authorities shut down the BBC’s FM relay stations in the cities of Juba and Wau, alleging that the broadcaster had failed to pay certain bills.

Lastly, we close this statement by expressing hope that the steps the new Ethiopian govern­ment has taken and will take, including reviewing the Anti-Terrorism and Civil Society Procla­m­ations, will lead to an enlargement of the civic space, as a free space where citizens can peacefully express their views and share grievances is a precondition for sus­tain­able deve­lop­ment.

A United Nations review of Rwanda’s human rights record is

Call for applications for Monitoring and Evaluation Associate