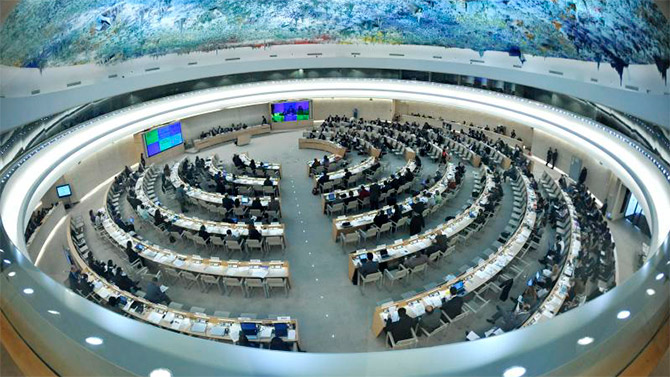 Tanzania: Open letter to States for joint action to address crackdown on civic space and prevent a further deterioration of the situation

Ahead of the 39th regular session of the UN Human Rights Council (“the Council”), which will be held from 10-28 September 2018, we write to call on your delegation to deliver statements, both jointly and individually, to address the ongoing crackdown on civic space and human rights backsliding in the United Republic of Tanzania.

Considering the rapidly declining environment for human rights defenders (HRDs), civil society, journalists, bloggers, the media and dissenting voices in Tanzania, we, the undersigned non-governmental organisations (NGOs), make a joint appeal to Member and Observer States of the Council. At the 39th session, States should urge the Tanzanian Government to change course, cease any form of intimidation, harassment and attacks against HRDs, journalists, bloggers, and opposition members and their supporters, and amend restrictive laws and regulations with a view to bringing them in line with international human rights standards.

Since 2015, Tanzania has implemented newly-enacted draconian legislation and applied legal and extra-judicial methods to harass HRDs, silence independent journalism and blogging, and restrict freedoms of expression, peaceful assembly, and association.

We call on your delegation to make use of the following agenda items[1] to raise concern, jointly and individually, and to engage in a constructive dialogue with the Tanzanian authorities:

Through these opportunities for dialogue, your delegation can help the Council fulfil its responsibility to “address situations of violations of human rights […] and make recommendations thereon” and to “contribute, through dialogue and cooperation, towards the prevention of human rights violations and respond promptly to human rights emergencies.”[2]

The 39th session should be leveraged to help prevent a further deterioration of the human rights situation in Tanzania and send the Tanzanian Government a message that the international community expects it to uphold its citizens’ human rights, in line with its obligations and the country’s history of openness, engagement, and respect for human rights.

We thank you for your attention to these pressing issues and stand ready to provide your delegation with further information.

Specific proposals for action at the Council’s 39th regular session

Tanzania’s long-standing commitment to improving the human rights of all people, both nationally and within the region, is notable and should be acknowledged as such. However, the country has witnessed a rapid shrinking of its civic space over the last three years.

Since 2015, a number of laws and regulations, which include the Electronic and Postal Communications Act (2010) and Online Content Regulations (2018), the Statistics Act (2015), the Cybercrimes Act (2015), the Media Services Act (2016), and the Access to Information Act (2016), provide authorities with overbroad powers to restrict, with little judicial oversight and inadequate legal safeguards, citizens’ exercise of their human rights.

HRDs, NGO members, journalists, bloggers and other independent or critical voices have been charged with vaguely-worded offences. Several of the abovementioned laws were rushed through Parliament, adopted without meaningful consultations, and quickly implemented by law enforcement authorities.

Political opposition has also come under attack, with new restrictions, such as a blanket ban on political rallies, significantly hampering its ability to function effectively and promote its platform. Since the start of 2018, political opposition members and parliamentarians have been violently attacked and even killed, including Mr. Godfrey Luena, an MP for main opposition party Chama Cha Demokrasia Na Maendeleo (CHADEMA), and Mr. Daniel John, a CHADEMA official in Dar es Salaam.

Civil society actors have also suffered harassment, stigmatisation and unlawful restrictions to their rights to express themselves, peacefully assemble, and associate. For instance, in 2017, two HRDs, Mr. Onesmo Olengurumwa and Mr. Baraka John, were arrested, detained and charged with “criminal trespass” following a raid on a book launch event held on private premises. Regarding public gatherings, police and security forces have de facto turned what is legally a notification regime into an authorisation regime.

A number of independent media outlets have been banned, suspended or sentenced to hefty fines, resulting from, and in increased, censorship and self-censorship. Between June and October 2017, the Tanzanian Government banned four newspapers for periods of between 90 days and 24 months on specious allegations.[3] In January 2018, the Tanzania Communications Regulatory Authority imposed hefty fines on five television stations accusing them of unbalanced reporting in connection to their coverage of allegations of human rights abuses.[4] Freedom of expression online has been threatened by March 2018 regulations that force bloggers to comply with draconian regulations and pay high registration fees.[5]

A report[6] published during the 38th session of the Council documents patterns of repression and offers an overview of the major trends affecting civic space in the country, highlighting the need for the international community to act to prevent a further deterioration of the situation. At a parallel event held last June, a group of NGOs raised the alarm and called on the Council to respond to Tanzania’s suppression of civic space – an early warning sign of a mounting human rights crisis – on the basis of its prevention mandate.

In May 2018, a group of over 65 civil society organisations (CSOs) wrote to President Magufuli to express their concerns over a rapidly deteriorating environment for the media, HRDs, and opposition members.[7] The CSOs wrote that the above-mentioned patterns and incidents and “other forms of harassment and persecution of civil society and media […] erode Tanzania’s role as a regional champion of public freedoms, peace and stability and represent a breach of its international, national and regional human rights obligations and commitments.” In just two years, Tanzania lost 22 ranks (from 71st to 93rd) in Reporters Without Borders’ World Press Freedom Index.[8]

The Council should now speak out. States should, with one voice, raise concern over Tanzania’s backsliding on human rights. A joint statement would go a long way towards sending the Government a constructive, but strong, message that it must change course regarding issues affecting civic space. A joint statement would be all the more effective since Tanzania has historically been subjected to little multilateral attention – which reflected its relatively positive human rights record in the sub-region.

Such a statement could be delivered under items 2, 3, 4 or 10, as outlined below. At the Council’s 39th session, the following opportunities may be used to raise the critical issues highlighted in this letter:

Last February, the European Union Delegation in Dar es Salaam raised concerns over “recent developments which threaten democratic values and the rights of Tanzanians” and the “rising number of reports of violence.”[9] Other stakeholders have also voiced concerns over human rights developments.[10]

In Geneva, States should follow suit by using the following opportunities to speak, jointly and individually, on the human rights situation in Tanzania:

The first report is an opportunity to ask the Tanzanian Government to provide the public with an update on the case of Mr. Azory Gwanda, a journalist who has been missing since November 2017 and whose disappearance may be related to his investigative activities. In a debate on the second report, concerns could be raised over “national security” legislation and the claims that are made by law enforcement authorities, including in Tanzania, that unspecified “terrorist” and other security threats justify the denial of citizens’ and civil society organisations’ requests to hold peaceful gatherings.[11] Lastly, in line with Council resolutions on equal participation in public affairs, States should call on the Tanzanian Government to allow the holding of public gatherings, including political oppositions rallies, which have been subjected to a blanket ban;

Under any of these items, States should also encourage Tanzania to extend a standing invitation to all special procedure mandate-holders and to accept pending requests for a visit. They should ask that Tanzania follow suit on the invitation extended by its Ambassador to the UN Office at Geneva, H.E. Dr. James Msekela, to the Special Rapporteur on freedoms of peaceful assembly and association to visit the country.[12]

Interactive dialogues are opportunities to highlight specific human rights issues and call on States, including Tanzania, to take corrective action on the basis of expert analysis and advice offered by OHCHR, special procedure mandate-holders, and other human rights experts.

At the Council’s 39th session, the following debates will be held. They should be used to raise concerns over human rights developments in Tanzania:

In multilateral fora such as the Council, as well as through their Embassies or High Commissions, in Dar es Salaam, States should raise relevant human rights issues with the Tanzanian Government. Established diplomatic channels, as well as fora for dialogue and cooperation, such as relevant sector groups of Tanzania’s Development Partners Group, can be used to raise concerns over human rights developments, which if the situation evolves towards a full-fledged human rights crisis, will adversely affect other bi- and multilateral matters, including development aid, trade, and investment.

[1] See the annex for more detailed proposals for action, as well the report and letter referenced in footnotes 3 and 4.

[12] The invitation was made on 26 June 2018, at an event organised by DefendDefenders and CIVICUS.

Statement in relation to the International Women’s Day 2020. In

February was a hectic month for DefendDefenders with many progressive endeavours. As we continued to monitor the situation for human rights defenders (HRDs) in the East and Horn of Africa sub-region, we particularly followed the progressive, yet fragile, developments in South Sudan.

Photo credit: 2011 Reuters At a side event on the

Gender Sensitivity: An Essential Ingredient in the Protection and Promotion of Women Human Rights Defenders

This week, we commemorate the International Women’s Day 2020 and

DefendDefenders Announces Focus on Sudan for 2020