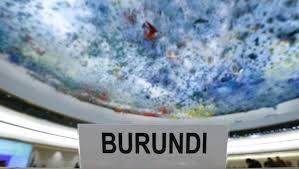 HRC39: Call to renew the mandate of the Commission of Inquiry on Burundi

Burundi: Call to renew the mandate of the Commission of Inquiry

Ahead of the 39th session of the UN Human Rights Council (“HRC” or “the Coun­cil”), we, the undersigned national, regional and international civil society organisations, write to urge your delegation to support a resolution renewing the mandate of the UN Commission of Inquiry (CoI) on Burundi.[1] Such a resolution should also ensure continuity for the work of the CoI through continued adequate resourcing of its secretariat, including its crucial investigative and evidence-gathering work.

The renewal of the CoI’s mandate is critically important to improve the human rights situation in Bu­rundi, and it offers the Council a number of practical and effective advantages. Among other things, it would allow the Council to:

At the Council’s 36th session (September 2017), the CoI informed the HRC that there were “reasonable grounds to believe that serious human rights violations and abuses have been committed in Burundi since 2015,” and that some of the violations may constitute “crimes against humanity.” At the 37th and 38th sessions of the Council (March and June-July 2018), the CoI described a political, security, econ­omic, social and human rights situation that has not improved since September 2016. In March 2018, the Com­mission’s Chairperson, Mr. Doudou Diène, stressed that the situation in the country con­tinued to deserve the Council’s “utmost attention.” In October 2017, the International Criminal Court (ICC) autho­rised an investigation into crimes committed in Burundi since April 2015. A pre­liminary exam­ination of the situation had been opened in April 2016.

The constitutional referendum that was held on 17 May 2018 was marred with violence and repression, with arbitrary arrests, beatings and intimidation of citizens cam­paigning for a “no” vote.[3] The BBC and VOA, two of the country’s main international radio stations, have been suspended for 6 months at the start of the official campaign, illustrating the climate of fear in which journalists and medias were pre­vented from a proper coverage of the event.[4] In the Com­mission’s words, as of June 2018 “human rights violations, among which extrajudicial executions, enforced disap­pear­ances, acts of torture and other cruel, inhuman or degrading treatment […], facilitated by a conti­nuing environment of threats and intimidation,” continue unabated. The CoI added: “The fact that several missing peo­ple have not been found and that unidentified bodies continue to be discovered in various parts of the country gives reason to fear the continuation of practices consisting of getting rid of the bodies of people arrested sometimes by individuals in police uniform or identified as agents of the National Intelligence Service (SNR) or the Imbonerakure.”[5]

Since it became a member of the Council, on 1 January 2016, Burundi has delivered multiple state­ments that have made clear its refusal to cooperate with human rights monitoring and investigation bodies and mechanisms. The Government has repeatedly launched attacks, which have sometimes des­cen­ded to a personal level, against the High Commissioner, UN officials, and inde­pendent experts. With no basis or evidence, it has publicly questioned the independence, competence, professionalism, inte­grity and legitimacy of High Commissioner Zeid and his Office, and has threatened, stigmatised, and exer­cised reprisals against human rights defenders and civil society organisations.[6] Burundians who have sought protection outside of Burundi have been subjected to harassment and persecution, including by members of the National Intelligence Service (SNR) and Imbonerakure.

Members of the CoI continue to be denied access to Burundi. Furthermore, at the time of wri­ting, the Burundian authorities have withdrawn visas from the team of experts mandated by HRC resolution 36/2, despite the fact that the latter was adopted at Burundi’s own initiative, with its sup­port and the support of members of Burundi’s own regional group. Burundi’s action in this regard clearly violates its Council membership obligations.

Recalling the letter a group of civil society organisations wrote in Sep­tember 2017,[7] we urge the Council, consistent with its mandate to address situations of violations of human rights, in­cluding gross and systematic violations, to pave the way for accountability by renew­ing the mandate of the CoI to enable it to continue monitoring human rights deve­lopments in the country, docu­men­ting viola­tions and abuses, and publicly reporting on the situation.

We thank you for your attention to these pressing issues and stand ready to provide your delegation with further information as required.

[2] See the UN Deputy High Commissioner for Human Rights’ statement at the Council’s 37th session (OHCHR, “Introduction to country reports/briefings/updates of the Secretary-General and the High Commissioner under item 2,” 21-22 March 2018, www.ohchr.org/EN/NewsEvents/Pages/DisplayNews.aspx?NewsID=22875&amp;LangID=E, accessed 20 July 2018).

[3] FIDH and Ligue Iteka, “A forced march to a Constitutional Referendum,” May 2018, www.fidh.org/IMG/pdf/report_burundi_may2018_referendum_on_constitution.pdf (accessed 27 July 2018).

[5] OHCHR, “Oral briefing by the members of the Commission of Inquiry on Burundi to the Human Rights Council,” 27 June 2018, www.ohchr.org/EN/NewsEvents/Pages/DisplayNews.aspx?NewsID=23274&LangID=E (accessed 20 July 2018).

[7] “Renewing the Mandate of the Commission of Inquiry on Burundi and Ensuring Accountability for Serious Crimes,” 19 September 2017, www.defenddefenders.org/press_release/hrc36-renewing-the-mandate-of-the-commission-of-inquiry-on-burundi-and-ensuring-accountability-for-serious-crimes/ (accessed 30 July 2018).

[7] “Renewing the Mandate of the Commission of Inquiry on Burundi and Ensuring Accountability for Serious Crimes,” 19 septembre 2017, www.defenddefenders.org/press_release/hrc36-renewing-the-mandate-of-the-commission-of-inquiry-on-burundi-and-ensuring-accountability-for-serious-crimes/ (consulté le 20 juillet 2018).