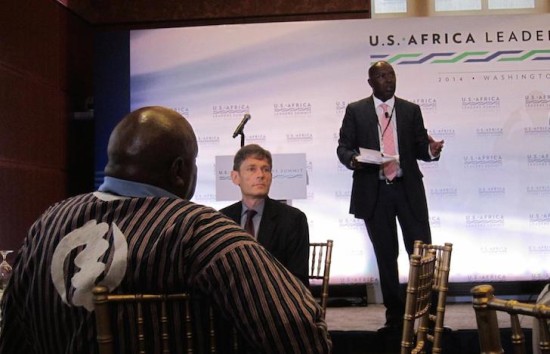 Thank you firstly to Secretary Kerry, and to all the staff of the State Department for the great honour of speaking to you today;

It is also a great honour to share this platform with USAID Associate Administrator, Mark Feierstein, Foreign Minister of Benin, Nasirou Bako Arifari , and US Assistant Secretary of State for Democracy, Human Rights and Labor, Tom Malinowski.

Allow me to begin with two brief comments that I hope will frame our discussions here this morning;

Firstly, civil society in Africa is under profound duress in many countries. I particularly observe this in the context of my own organisation’s work in East and Horn of Africa. Secondly, in 2014, the importance of civil society to Africa- to building strong, accountable, and democratic institutions, and to fostering a human rights culture- has never been greater. Those countries that value the role of civil society are invariably more democratic, more stable, and less prone to conflict or unconstitutional changes of government.

In spite of what I would characterize as a generally negative picture, a number of positive counter-examples have started to emerge, and I hope we can touch on some of these this morning.

As the director of a human rights organization in East Africa, I have witnessed the narrowing space for civil society. This is has been a global phenomenon over the last two decades, but has been specifically acute across many African countries;

Over the last two decades, many African leaders who have acquired or entrenched power through non-democratic means, have come to fear the power, creativity, and integrity of civil society.

Many have responded by introducing regressive new laws, limiting permissible activities and restricting the rights of their people to freedom of association and expression;

The popular uprisings across North Africa in 2010/11 created a wave of paranoia among many African heads of state. Over the last 2-3 years, we have seen the introduction of new laws across Africa and the world – from Bahrain to Uganda- aimed at curbing the rights to freedom of public assembly- to effectively stifle dissent, before it has the chance to properly emerge.

I would like to provide some recent illustrative examples of the scale of the challenges we face- many that directly involve colleagues, friends and peers of mine.

Swaziland is an absolute monarchy, ruled despotically by King Mswati for the last 28 years;

Less than a fortnight ago, on July 25, 2014, a Swazi court sentenced human rights lawyer Thulani Maseko to two years in jail, following his publishing of articles questioning the independence of the judiciary earlier this year.

We have been working in South Sudan long before it gained its independence in 2011. Over the last three years, up to the outbreak of civil war in December, we researched and documented state tactics to stifle and silence civil society.

Since the outbreak of the current conflict in December, my organisation has supported over a dozen highly skilled human rights defenders, who have been forced to flee the country due to risks they face.

Somalia is second only to Iraq, as the world’s most deadly environment for journalists;

In 2013 alone, four journalists were murdered, and a total of 27 journalists have been assassinated since 2005;

However, there are reasons for cautious optimism. Across Africa, you can see both the positive power of civil society, and the wider social benefits in societies which foster an enabling environment for civil society.

In Senegal, throughout 2011 and 2012, anti-corruption campaigners were critical in contributing to the downfall of former president Abdoulaye Wade, who sought to run for a third term in power by amending his countries constitution;

In Benin, one of Africa’s more stable democracies, freedom of assembly and association and routinely respected;

In Cote d’Ivoire, on 11th June, the National Assembly passed a new law to promote and protect the rights of human rights defenders- the first such law of its kind in Africa.

To conclude, there is not one unifying narrative, when it comes to civic space in Africa. Whilst the general trend can best be understood as negative, there are countervailing positive forces in Africa- within and outside government- that should be looked at, discussed, and ultimately harnessed. I hope we can touch on some of those ideas over the course of the next hour.