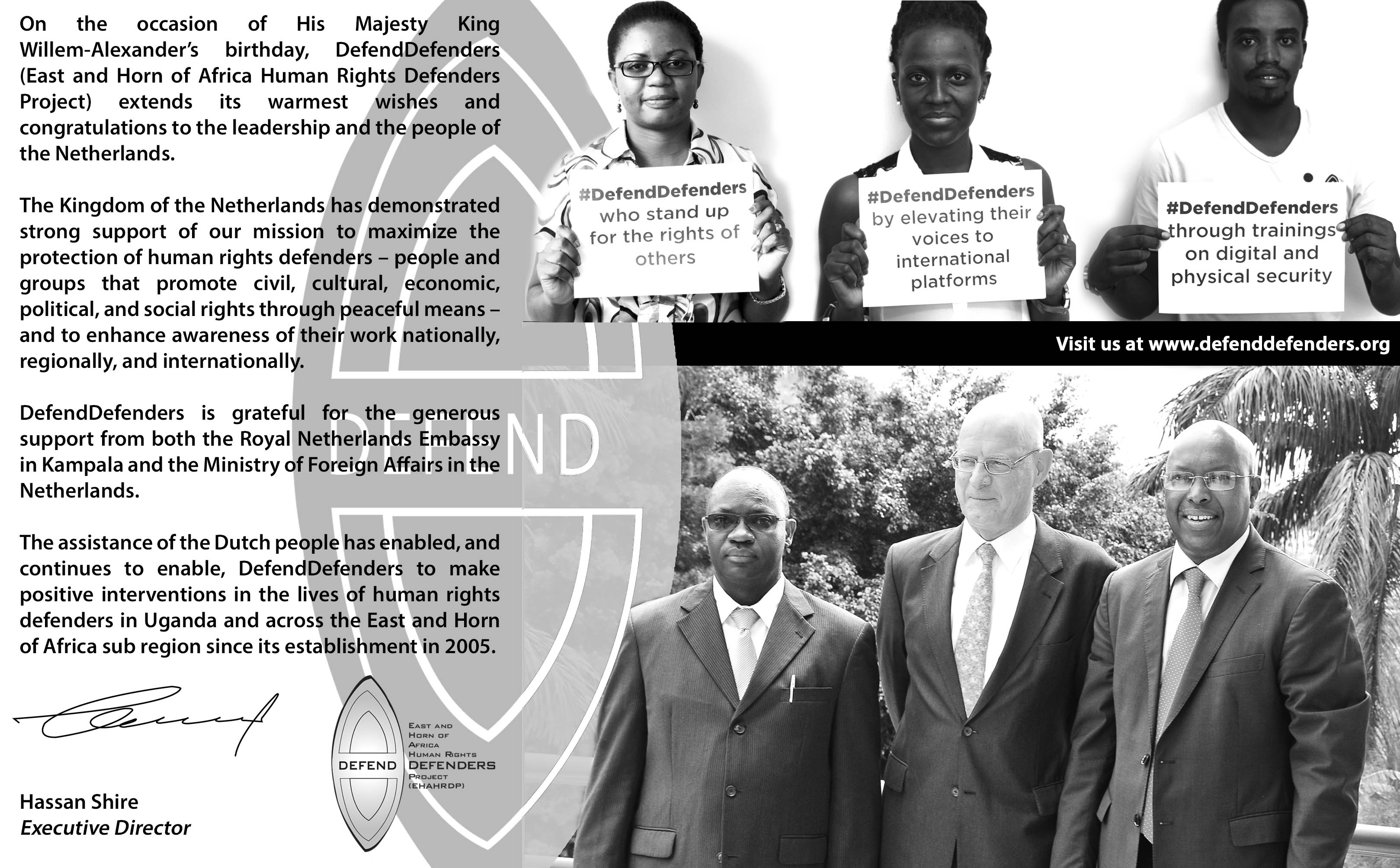 Below is a congratulatory message to the Kingdom of Netherlands on the occasion of King’s Day recognising the critical support they have provided in the promotion and protection of human rights in the East and Horn of Africa, followed by a Q&A with DefendDefenders’ Executive Director Hassan Shire. The original message appeared in the Daily Monitor on 27 April 2016. 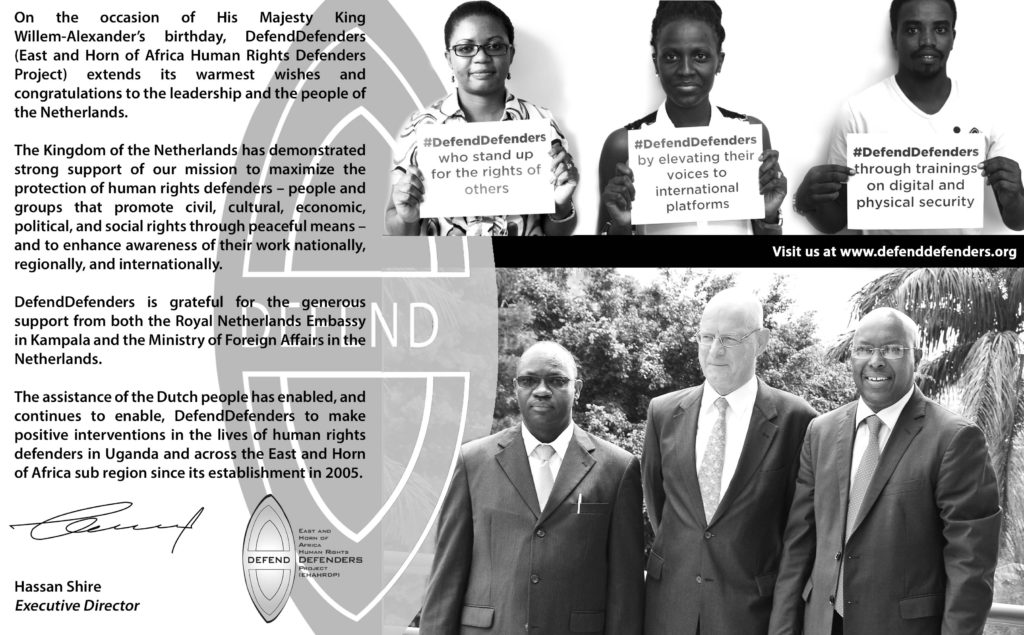 How would you describe the state of human rights in the East and Horn of Africa?
Many countries in this sub-region have experienced massive human rights abuses, dictatorships, civil wars and, in the case of my native Somalia, a total collapse of the state. However, people have always proved resilient and, no matter the dangers they face, they continue to claim their rights.

We have made progress, but not nearly enough. Human rights and human rights defenders are increasingly under threat and attack. In the last year, civil society in Burundi has effectively been destroyed. Prolonged conflicts in Sudan and South Sudan have subjected civilians to the most shocking violations. The Eritrean regime is among the most repressive in the world. Even right here in Uganda, we have witnessed a disturbing number of attacks against journalists during the recent elections.

What are the most abused rights, countries that record the most cases, and the key perpetrators of such abuses?
Human rights do not exist in a vacuum, independent on one another. Right now, we are seeing increased restrictions on freedom of expression in many countries, and this is reflected in the enjoyment of other freedoms – among others the freedoms to assemble, to create an organisation, to obtain funding for activities, to demand that land rights be respected. Violators of human rights rarely pick and choose: if they infringe on one right, they will inevitably infringe on more.

We need to be particularly vigilant because the situation for human rights defenders can deteriorate shockingly fast. This year, the majority of defenders that we supported came from Burundi. A decade ago, Kenyan human rights defenders were the ones most in need of protection. We also see that defenders find themselves caught in the crossfire between different parties. Government authorities, police, or security agencies that operate with impunity or in grey areas of the law frequently target defenders. Then again, in countries like South Sudan and Somalia they are also often attacked by non-state actors.

Who are the major victims of human rights abuses in the region?
In a way, we all are. human rights are moral principles. They are inalienable and fundamental rights that apply to you and me, simply because we are all human beings. If these rights are violated, it is a violation against everyone.

Of course there are people on the front line of this struggle. Human right defenders who speak out on behalf of the voiceless too often face severe repercussions – against their livelihoods, against their person, or even against their families and loved ones.

How much Dutch support do you get annually for defending rights? What are some of the major activities that you have promoted as far as human rights protection and promotion are concerned in the region?
In October 2015, DefendDefenders celebrated its ten-year anniversary, and the Dutch government has been with us since the beginning. It would be impossible to list all the activities we’ve undertaken with their support over the last decade. What I can say is that their contributions have, and continue to improve the work of human rights defenders and save their lives every single day.

What major challenges do you face in promoting human rights in the region?
We defend human rights defenders. By speaking out, these activists will always find themselves in the crosshairs of those that are violating people’s rights. When attempting to promote their work and protect individuals, there are many challenges we face. These can range from restrictive legislation, which criminalises the legitimate work defenders are doing, to harassment, intimidation, and physical attacks by the authorities. What is truly remarkable is that, despite the dangers they face, human right defenders do not give up.

As far as the King’s Day is concerned, what is the significant of the day to the region?
King’s Day carries very strong symbolism. The Netherlands is one of the oldest democracies in the world and the King represents those values. A king can represent sovereign power – the rule of one individual – but instead His Majesty Willem-Alexander has come to personify the Dutch commitment to unity, democracy, and fundamental human rights. That is something we can all aspire too.

Hassan Shire is the founder and Executive Director of DefendDefenders (East and Horn of Africa Human Rights Defenders Project). From our headquarters in Kampala, the organisation provides protection, capacity-building and advocacy support to human rights defenders from 11 countries across the sub-region.