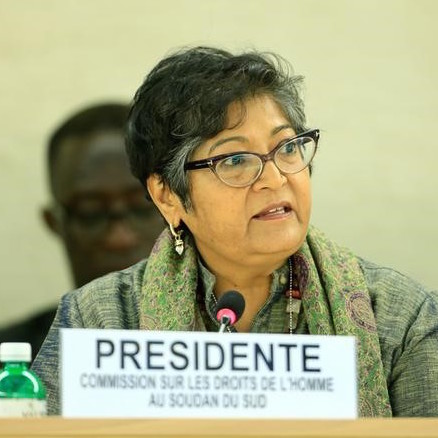 Open letter: UNHRC should renew and strengthen mandate of the Commission on Human Rights in South Sudan

RE: Renewing the mandate of the Commission on Human Rights in South Sudan and addressing the need for accountability for past and on-going crimes under international law and human rights violations in South Sudan

We, the undersigned South Sudanese, regional and international non-governmental organisations, write to urge your delegation to renew and strengthen the mandate and capacity of the UN Commission on Human Rights in South Sudan (the Commission) to address the continued lack of accountability for severe, widespread and on-going crimes under international law and human rights violations and abuses, many of which amount to war crimes and crimes against humanity, during the upcoming 34th session of the UN Human Rights Council (UN HRC).

Since July 2016, the political, humanitarian and human rights situation in South Sudan has deteriorated. The return of Riek Machar to Juba in April 2016 was the starting point for the implementation of the August 2015 Agreement on the Resolution of the Conflict in the Republic of South Sudan (ARCSS). However, an outbreak of fighting in July 2016, which culminated in the flight of then First Vice-President Riek Machar from Juba and eventually from South Sudan, seriously jeopardised the implementation of the ARCSS and its transitional justice components.

During the July 2016 clashes between government and opposition forces in the capital Juba, the Sudan Peoples’ Liberation Army (SPLA) and opposition soldiers killed and raped civilians and extensively looted civilian property. Since then, the security situation in the country has continued to deteriorate, including in the Equatoria region, forcing hundreds of thousands to flee. According to the UN Office for the Coordination of Humanitarian Affairs (OCHA), as of December 2016, there were over 3.3 million South Sudanese civilians displaced internally or to neighbouring countries.

During the UN HRC’s 26th Special Session on South Sudan, Yasmin Sooka, Chair of the Commission on Human Rights in South Sudan stated that “all of the early warning signals for mass atrocities in South Sudan are there.” The Commission highlighted the importance of bringing perpetrators to justice in order to curb these on-going violations.

Yet, the African Union and the Government of South Sudan have yet to make significant progress in establishing the Hybrid Court for South Sudan (HCSS), provided for in Chapter V of the ARCSS. According to news reports, Minister of Information Michael Makuei Lueth recently publicly opposed the establishment of the three transitional justice mechanisms included in the ARCSS: the Commission for Truth Reconciliation and Healing, the Hybrid Court for South Sudan, and the Compensation and Reparation Authority.

Once established, and provided its structure and institutional framework ensures the Court can conduct fair, effective trials, it will constitute a crucial tool for ensuring justice, truth and reparation for serious crimes under international law committed in South Sudan. This will help to end the pervasive culture of impunity in the country. While the HCSS cannot in and of itself resolve the ongoing conflict, we believe it can contribute to breaking, or reversing, the cycle of violence and revenge. It can contribute to peace in the short- and long-term by increasing the opportunity to deter additional human rights violations and address the underlying grievances that drive violence. Conversely, a lack of progress towards the establishment of the HCSS could embolden perpetrators and encourage victims to take justice into their own hands through acts of violent revenge.

In June 2015, the UN HRC adopted resolution A/HRC/31/20 mandating the Commission to monitor and report on the situation in South Sudan and provide guidance on transitional justice, accountability, reconciliation and healing, as appropriate, and make recommendations on technical ‎assistance to the government to support these areas. The 26th Special Session of the UN HRC on South Sudan did not result in any substantial changes to the mandate, instead renewing it pending the publication of the Commission’s report in March 2017.

Pending the establishment of the HCSS, investigating on-going crimes under international law and human rights violations remains a priority to ensure collection and preservation of evidence and successful prosecutions. We believe the Commission could contribute in supporting the process of transitional justice, and take significant steps towards investigating and documenting human rights violations and preserving evidence in parallel or pending the establishment of the HCSS.

After a joint consultative meeting on South Sudan on January 29, 2017 on the margins of the African Union 28th Ordinary Summit of the Heads of State and Government in Addis Ababa, the Intergovernmental Authority on Development (IGAD), the AU and the UN “reaffirmed their commitment and determination to further enhance their cooperation in support of the South Sudan peace process.”

Our organisations consider that the UN HRC should take meaningful action at the 34th Session to enhance the Commission’s role and enable it to support the achievement of justice, truth and reparation for the victims of the grave human rights situation in South Sudan, thereby creating conditions for sustainable peace

The UN HRC should adopt a resolution during its 34th session to:

African Union Day: Africa’s Cultural Heritage Is an Integral Part of its Renaissance

As the Continent celebrates the 21st anniversary of the AU Constitutive Act, AfricanDefenders and DefendDefenders emphasize the necessity of the Union to reflect on aspiration 5 of its Agenda 2063: An Africa with a strong cultural identity, common heritage, shared value, and ethics.