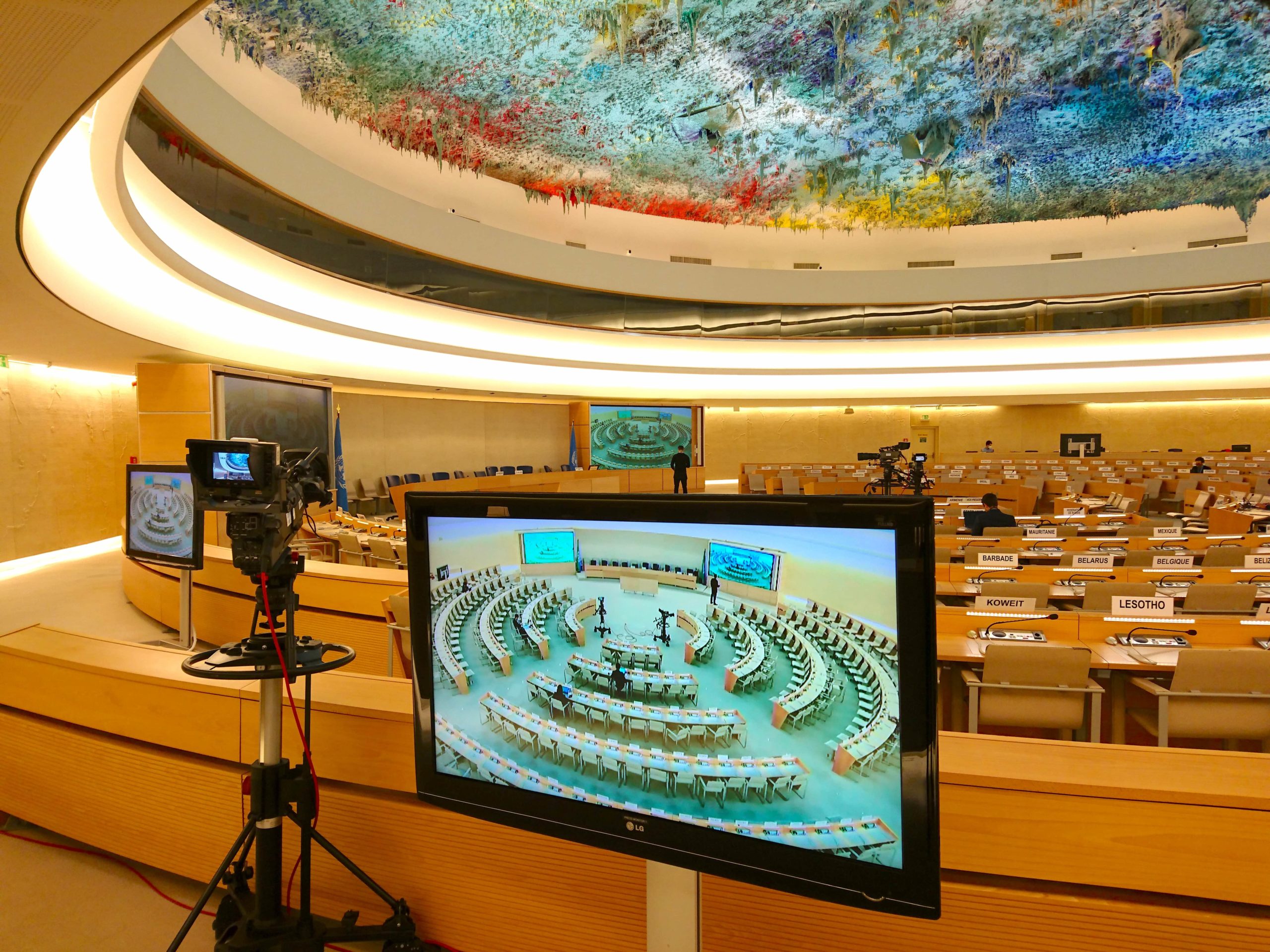 Item 2: General Debate on the oral update by the High Commissioner (14 September 2022)

We congratulate you on your appointment as High Commissioner for Human Rights and wish you all the best in your new role.

We are fully aware that it is one of the most difficult jobs in the world, and we reiterate that it is vital for the High Commissioner to be “a compelling leader for human rights within the UN system and throughout the world.”

We encourage you to operationalise Council resolution 45/31 by strengthening the work of the OHCHR regarding early warning signs and prevention, as well as risks of human rights emergencies. You have a key role to play as regards prevention. We encourage you to use intersessional briefings more often to bring infor­mation to the Council’s attention.

You also have a universal mandate. You should continue to use it to report on situations that are not formally on the Council’s agenda. Irrespective of reporting and debates requested by the Council, it is your duty to document and expose violations wherever they occur.

Once again, we highlight the importance of OHCHR’s work on civic space. If developments in Tanzania show that positive signals from the highest level can improve a country’s situation, in Ethiopia, we are deeply wor­ried about intensifying repression against civil society and journalists.

In Sudan, we salute the work of the Designated OHCHR Expert and call on the Office to monitor human rights violations and bring information thereon to the attention of the Council, and to advise on the further steps that may be needed. These could include the establishment of a full-fledged investigative mechanism.

Link to video recording of the debate / continued / end

We welcome your report. We are deeply concerned over the patterns of violations you identified, which are part of a “cycle of extreme violence and retribution,” including extrajudicial killings, sexual violence, and at­tacks against civilians. Particularly concerning is the fact that there are “reasonable grounds to believe” that, in several instances, violations amount to crimes under international law.

With civil society partners, DefendDefenders called for the extension of the Commission’s mandate, which is warranted on both technical and substantive grounds. We stress that the Commission needs time and resour­ces to complete its mandate given the magnitude, gravity, and scope of violations and abuses com­mit­ted by all parties to the conflict.

We highlight the following issues, which deserve the Council’s utmost attention:

Item 4: Interactive dialogue with the Special Rapporteur on Burundi (23 September 2022)

Last month, 55 civil society organisations (Burundian, African, and international) called for the renewal of the Special Rapporteur’s mandate. We stressed, among other elements, that the Special Rapporteur needs time to fulfil his mandate and that without structural improvements, the Council should extend its scrutiny of the situation in Burundi.

We encourage Mr. Zongo to continue his work and call on members of the Council to extend his mandate. We also call on countries that received a visit request to respond positively.

While seven years after the start of the crisis, the East African Court of Justice made public a decision, dated 2021, that ruled that the third term of late President Nkurunziza was illegal, violations and impunity continue unabated. For victims, justice is more elusive than ever.

To the pressing issues highlighted in the civil society letter, we add:

These are issues that deserve the attention of the Human Rights Council.

I thank you for your kind attention.

[Statement delivered in English and French]

We express solidarity with the victims of Russia’s aggression against Ukraine and of Chinese repression, inclu­ding in Xinjiang, Hong Kong, and Tibet. We join civil society partners who call for Human Rights Council action on Russia and China and urge African states to prioritise human rights principles and objective criteria over political considerations and to support Council initiatives on these two countries.

We also express our utmost concern over repression of dissenting voices in Egypt and Guinea, and over on­going violations and abuses by state and non-state actors in the Greater Sahel, including Mali.

In a new report, DefendDefenders and AfricanDefenders comprehensively analyse the voting behaviour of Afri­can states at the Council. “Between Principles and Pragmatism” is an evidence-based analysis of patterns of votes for the African Group, covering all votes on resolutions that took place since the Council’s creation, in 2006. We conclude that while African states are the number one supporters of thematic resolutions, regar­ding coun­try-specific resolutions, their political weight remains below their objec­tive weight (the number of seats they occupy). This is particularly true for initiatives presented under item 4, which African states fail to support.

We appreciate the openness of the Permanent Representative of Cameroon, H.E. Mr. Salomon Eheth, to hold a regular dialogue with us on the human rights situation in his country. We strongly condemn the crimes com­mitted by separatist groups in recent months, including attacks on children and destruction of schools. At the same time, we hope that the Cameroonian government will implement the numerous recommendations calling for the release of political prisoners and we urge the authorities to protect human rights defenders in all circumstances.

I thank you for your attention.

Once again, while we welcome the Secretary-General’s report, we lament the persistence of reprisals. This phenomenon means that instead of addressing the grievances and concerns human rights defenders express, governments seek to silence them.

As you highlight, “when multiple UN actors raise concerns about cases or situations during a reporting period, it can be a sign of widespread and severe incidents of intimidation and reprisals for cooperation with the Or­ga­nization.”

We deplore that Burundi, Cameroon, Djibouti, Egypt, and South Sudan remain mentioned in the report. We re­gret the presence of Rwanda and Sudan.

In Bu­rundi, four lawyers, Armel Niyongere, Dieudonné Bashirahishize, Vital Nshimirimana, and Lambert Niga­rura, have faced dis­barment or suspension following their cooperation with the Committee against Torture. They were previously accused of participating in an insurrectional movement and sentenced in absentia to life imprisonment, and saw their financial assets seized, including by ruling CNDD-FDD officials.

In Djibouti, Kadar Abdi Ibra­him’s case remains unresolved. After Mr. Ibrahim participated in Universal Periodic Review (UPR) pre-sessions, in April 2018, agents of Dji­bouti’s Infor­mation and Security Service (SDS) raided his home and arbitrarily confiscated his passport. Four and a half years on, authorities continue to hold his pass­port.

In 2021, as reported in the 2022 report of the Secretary-General, Djiboutian authorities claimed that Mr. Ibra­him has “connections with extremist movements.” This vague assertion does not meet any standard or even semblance of due process, and Mr. Ibra­him remains unable to have his case reviewed by a court of law. Repri­sals against him must stop.

We welcome your update but reiterate that without political will to address gross, widespread, and systematic human rights vio­lations and generalised impunity in South Sudan, all the technical assistance in the world will be futile and ineffective.

As the transitional period has been extended for two years, we ask: Will this additional time be used to adopt an inclusive election law, put in place an independent electoral commission, conduct a national census, and adopt a perma­nent Constitution? Or will it be used to buy more time, make more empty promises, and further delay the imple­mentation of the Revitalised Peace Agreement, including the operationalisation of transitional justice insti­tutions like the Hybrid Court?

Last week, the UN Commission on Human Rights in South Sudan warned about escalating violence that proli­fe­rates at a local level all over the country, threatening the peace process.

Ahead of the Council’s 52nd session, we urge states to maintain a high level of attention to the country through investigations, collection and preservation of evidence, monitoring, reporting, technical cooperation, and ad­vice on transitional justice. The mandate of the Commission on Human Rights in South Sudan should be exten­ded in full for a further year—and until the end of the transitional period.

Link to video recording of the debate.

Item 10: Interactive Dialogue with the Independent Expert on Somalia (5 October 2022)

We thank you for your report and welcome the Council’s ongoing work to assist the Somali authorities in ful­filling their obligations, support independent actors in the country, and scru­ti­nise the human rights situ­ation. We call for the adoption of a resolution that extends the Independent Expert’s mandate by consensus.

We welcome the fact that you were able to visit not only Moga­dishu, but also Baidoa, and the con­sul­tations you led. We also wel­come your comprehensive benchmarking effort.

Like you, we welcome the successful completion of the electoral process and the peaceful transition of power. The objective for Somalia, however, remains the hol­ding of a “one-person, one-vote” election.

Despite some positive steps and encouraging signals, human rights challenges remain tremendous. The hu­ma­nitarian situation is alarming, including because of the impact of violence, insecurity, climate change, and locust infestation. Addressing food insecurity and the risk of famine in several areas of Somalia should be a priority for national, regional, and international actors.

As Pre­si­dent Hassan Sheikh Mohamud assumes office, we highlight the importance of civic space. Defamation-related provisions of the Penal Code and other provisions unduly restricting free expression and other funda­mental freedoms should be revised. Human rights defenders (HRDs) should be protected and impunity for attacks against them and journalists should be eliminated. Effective work by special prosecutors for the killings of journa­lists and vio­lence against women and girls is vital. There is no path towards democracy and stability outside an open civic space and the rule of law.

How can you assist the authorities in prioritising the establishment of a national human rights commission?

Link to video recording of the debate.