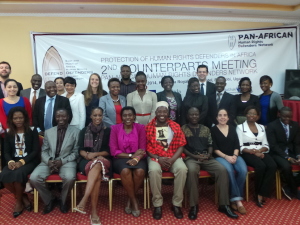 3. The meeting was opened by Mr. Hassan Shire, Chairperson of PAHRDN and Executive Director of the East and Horn of Africa Human Rights Defenders Network. Mr. Shire provided reflections on the situation of human rights defenders across the African continent, and urged participants to evaluate the progress of the network and strategize on the way forward. Noting that PAHRDN represents a highly ambitious exercise in coalition building, Mr. Shire emphasised the vital role of PAHRDN in providing a united, authentic voice for African human rights defenders across the continent;

4. PAHRDN was honoured to be joined by the representative of the Ambassador of the European Union Delegation to Uganda, Ms. Rosette Meya, Human Rights, Conflict and Gender Officer. In her keynote address, Ms. Meya welcomed the efforts of PAHRDN in meeting the needs of human rights defenders across Africa and reaffirmed the commitment of the EU Instrument for Democracy and Human Rights in supporting human rights, democracy and rule of law globally including on the African continent, through its generous financial support to PAHRDN;

5. Representatives from the five-sub regional networks shared their experiences and challenges since the establishment of PAHRDN in 2013. PAHRDN’s workplan for 2015 was reviewed, with participants providing their views on the proposed activities;

6. Three working groups were formed, which over the course of two days considered PAHRDN’s strategy with regards to protection and security management for human rights defenders, advocacy, and fundraising and resource mobilization. Following extensive consultations a series of specific and measurable actions were agreed upon, to be implemented at the continent-wide and sub-regional level;

7. A presentation was made by PAHRDN Steering Committee thematic focal point Pepe Julian Onziema on the situation of sexual orientation and gender identity rights activists across Africa including increasing criminalisation. PAHRDN members agreed to mainstream these concerns within existing protection and advocacy activities.

• Enhance the capacities of PAHRDN’s sub-regional networks in security management and protection for human rights defenders through training protection officers on human rights monitoring, secure digital documentation, and reporting;
• Establish a systematic, network-wide method to share information on cases of human rights defenders at risk across the continent;
• Ensure the fulfilment of Resolution 273 of the African Commission on Human and Peoples’ Rights (ACHPR) on reprisals against human right defenders, through the provision of high-level technical and operational support to the ACHPR’s Special Rapporteur on Human Rights Defenders;
• Publication of an ‘African Human Rights Defenders Index’ on a regular basis, comprehensively detailing both the law and practice relating to human rights defenders and their operating environments, across the entire continent;
• Redoubling efforts to raise the visibility of PAHRDN, its member networks, and human rights defenders across the continent through the launch of a new website and the development of a clear media strategy;
• Development of a coherent and streamlined process for joint press statements, urgent actions, and other public advocacy tools;
• Identification of funding gaps and capacity building needs within the network, and development of fundraising strategies;
• Fostering mentorship between networks, so as to provide governance support to sub-regional network where necessary;

9. The Chairperson and secretariat of PAHRDN agreed to provide a full written overview of the agreed work-plan, so as to enable a final workplan to be agreed within two weeks of today’s date by all of the sub-regional networks of PAHRDN.

10. The Chairperson of PAHRDN presented as a proposal, the establishment of a Pan-African Human Rights Endowment, to ensure the long-term sustainability of PAHRDN and to create a permanent financial resource for African human rights defenders at risk.

11. Members of PAHRDN discussed and agreed upon a course of action based upon a number of recommendations which emerged from three days worth of discussions, including the establishment of a cross-regional mentorship programme, improvements to cross-regional communication, and the selection process for the African Human Rights Defenders Shield.

Oral statements delivered by DefendDefenders and AfricanDefenders at the 68th