The East and Horn of Africa Human Rights Defenders Project (EHAHRDP) Executive Director and the Pan African Human Rights Defenders Network (PAHRDN) Chairperson, Mr. Hassan Shire paid a visit to the European Union Delegation to the African Union in Addis Ababa. They met and shared with His Excellency Ambassador Gary Quince the progress which has been made on the ongoing PAHRDN 3-year project. The project was launched in February 2013 under the global fund of the European Instrument for Democracy and Human Rights to promote a safe legal and working environment for human rights defenders (HRD) across Africa, and will be concluded in the next six months. The Ambassador’s team were also present at the meeting, including Karin Kaup-Lapõnin, First Secretary; Anna Burylo, Head of Cooperation; Luca Zampetti, Head of Political, Press and Information Section; and Paula Cristina Fernandes, Pan African Governance Program Manager. 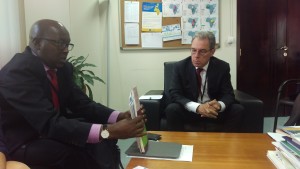 Among others, the African Human Rights Defenders Shield Award given to an HRD who has demonstrated both bravery and commitment in his work for human rights. This year, the award will be given out during the 10 year anniversary celebration of EHAHRDP in October in Kampala, Uganda.

A pool of security management and digital security trainers now operates throughout the continent, providing HRDs with valuable preventive tools to improve their physical and online security. In cases where HRDs are in need of protection, a fully functional emergency protection and referral mechanism is in place in North Africa, Central Africa, West Africa, the East and Horn of Africa and Southern Africa through our sub-regional networks. PAHRDN has successfully provided support to numerous HRDs throughout the continent over the course of this project. Improved collaboration and mentorship between the different networks has also allowed for a fruitful exchange in best practices and joint advocacy initiatives, such as the ongoing #WeDefend campaign. The launch of the first report on the state of HRDs in Africa highlighting the laws and practices that shrink the working environment for HRDs in Africa is another milestone.

Over the course of the project, the network has also done substantial work at the African Commission on Human and People’s Rights (ACHPR). It supported the ACHPR in implementing resolution 276, which established a focal point on reprisals. Continued advocacy work at the ACHPR contributed to the passing of a landmark resolution on attacks against individuals based on their presumed sexual orientation and gender identity.
buy kamagra gold online www.mabvi.org/wp-content/themes/mabvi/images/new/kamagra-gold.html no prescription

PAHRDN supported the research and production of the ACHPR report on the state of Freedoms of Association and Assembly in Africa, which was adopted and launched in Banjul, The Gambia during its 56th Ordinary Session.
buy fluoxetine online www.mabvi.org/wp-content/themes/mabvi/images/new/fluoxetine.html no prescription

Ongoing efforts are being made to secure a new mandate of the ACHPR Working Group on Freedom of Association and Peaceful Assembly to develop a Model Law/Guidelines on this topic. Finally, PAHRDN has been engaging in strategic litigation within the African courts system, and has already been successful in a joint amicus curiae on the case of criminal defamation of Issa Lohé Konaté – Burkina Faso. The landmark decision of the African Court on Human and Peoples’ Rights was a significant landmark for PAHRDN.

His Excellency Ambassador Gary Quince shared with the PAHRDN delegation the outcome of the European Union – Africa Summit and highlighted five pillars of the partnership established with a special focus being set on democracy, governance and human rights, which is to be achieved through the strengthening the AU human rights system and increased participation of civil society organisations in Pan-African issues. A joint annual forum is to take place in the coming months to bring together and increase cooperation between African and European stakeholders. EHAHRDP welcomes this initiative and looks forward to bringing its expertise in terms of HRDs protection across the continent to the table.

As the project comes to an end, the network is actively looking towards the future. Several objectives are in the process of being established, including the establishment of “HRDs Hubs”, or shelter cities where  HRDs in need of protection could rest and respite, and seek to receive training or further their education. The prolongation of the partnership between the EU and the AU will most likely offer more opportunities for the Network to engage with the African Union on the issue of human rights defenders. As stated in European Union Guidelines on Human Rights Defenders, “the EU believes it is important to ensure the safety of human rights defenders and protect their rights”, and will no doubt continue to be instrumental in providing support, training and advocacy avenues to human rights defenders throughout the continent. 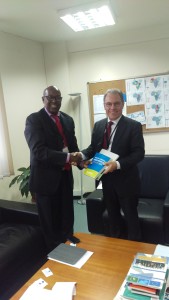 Mr. Hassan Shire shared with His Excellency Ambassador Gary Quince a selection of publications, including the most recent report on the State of Human Rights Defenders across the continent. The delegation from PAHRDN also provided the Ambassador and his team with insights into the situation of human rights defenders in the sub-region, including in Burundi and South Sudan. The director of EHAHRDP and his delegation are grateful for the support of the European Instrument for Democracy and Human Rights in financing the implementation of the protection program of HRDs in Africa.