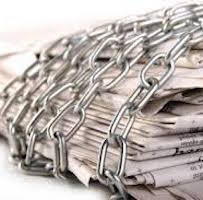 Puntland’s Minister of Information Mohamud Hassan So’ade should stop trying to muzzle and intimidate the press through death threats, undue legal restrictions and his Ministry’s interference in the registration and accreditation of journalists, said DefendDefenders (East and Horn of Africa Human Rights Defenders Project) and the National Coalition of Human Rights Defenders in Somalia (NCHRD-S) today.

In a letter dated 9 July, Minister Mohamud Hassan So’ade instructed media outlets to accredit their journalists by sending their names to the Ministry by 25 July.
buy viagra oral jelly online nouvita.co.uk/wp-content/themes/twentynineteen/inc/new/viagra-oral-jelly.html no prescription

The letter states that “Failing to comply with these orders, no journalist will be accredited to report from Puntland, while any media house that fails to provide its employees list to the Ministry will be banned from broadcasting and operating in the regional state’s area of jurisdiction.” In 2014, the Puntland Media Law was amended to give the Ministry of Information the power to accredit and suspend journalists and media outlets in a widely criticised move to restrict freedom of the press.

“It is the State’s duty to protect the rights and work of human rights defenders and journalists, and guarantee that the law does not become a political tool to stifle critical or dissenting views,” said Faizal Abdzi, National Coordinator of NCHRD-S. “The Media Law should be reviewed and amended to protect the independence of the media from political interference, and to respect regional and international standards.
buy suhagra online nouvita.co.uk/wp-content/themes/twentynineteen/inc/new/suhagra.html no prescription

On 23 June, when asked about the legal basis for restrictions on freedom of the press, Minister Mohamud Hassan So’ade responded: “We will not look at the law. We will use bullets and beatings.” When a second journalist asked a similar question about the legal and constitutional protection of free speech, the Minister reiterated his threats, stating that: “We do not recognise the Constitution, we do not recognise the law. We will rule you [the media] with power and abuse because you broke the law.”

The journalists’ questions were related to a letter issued by the Ministry of Information on 22 June ordering that journalists refrain from interviewing persons linked to pirates and terrorists. According to the Media Association of Puntland, the Minister was recorded threatening to use force and to kill journalists who do not respect the order. The next day, Puntland Police shut down Daljir FM’s radio stations in Garowe and Bosaso, and confiscated their equipment.

“That a Minister should be allowed to make death threats and express such disregard for the rule of law in complete impunity sends out an extremely worrying message”, said Hassan Shire, Executive Director of DefendDefenders. “As Somalia prepares for its electoral process later this year, the government of Puntland should strengthen its commitment to free speech and ensure that it prosecutes those threatening and intimidating journalists and placing undue restrictions on the media.”

Article 6 of Puntland’s Media Law prohibits reporting on the vaguely termed “secrets of the Puntland government,” and removed the government’s obligation to publicly define what falls under this category. Article 25 of Puntland’s Constitution protects every individual’s right to express their opinions in oral, press, writing, and media without interference, and Article 35 states that “the media and the information agencies have the right of freedom to their institutional duties, without any interference and hindrance to their objectives.”

Article 19 of the International Covenant on Civil and Political Rights requires that all restrictions placed on free speech be provided for by law, necessary and fulfil a legitimate aim. Regional instruments such as the 2002 Declaration of Principles on Freedom of Expression in Africa of the African Commission on Human and Peoples’ Rights defend the right of all to express themselves through the media, and warns against the political interference into the regulation of the media.
buy amoxicillin online nouvita.co.uk/wp-content/themes/twentynineteen/inc/new/amoxicillin.html no prescription

DefendDefenders and NCHRD-S call on the government of Puntland to: