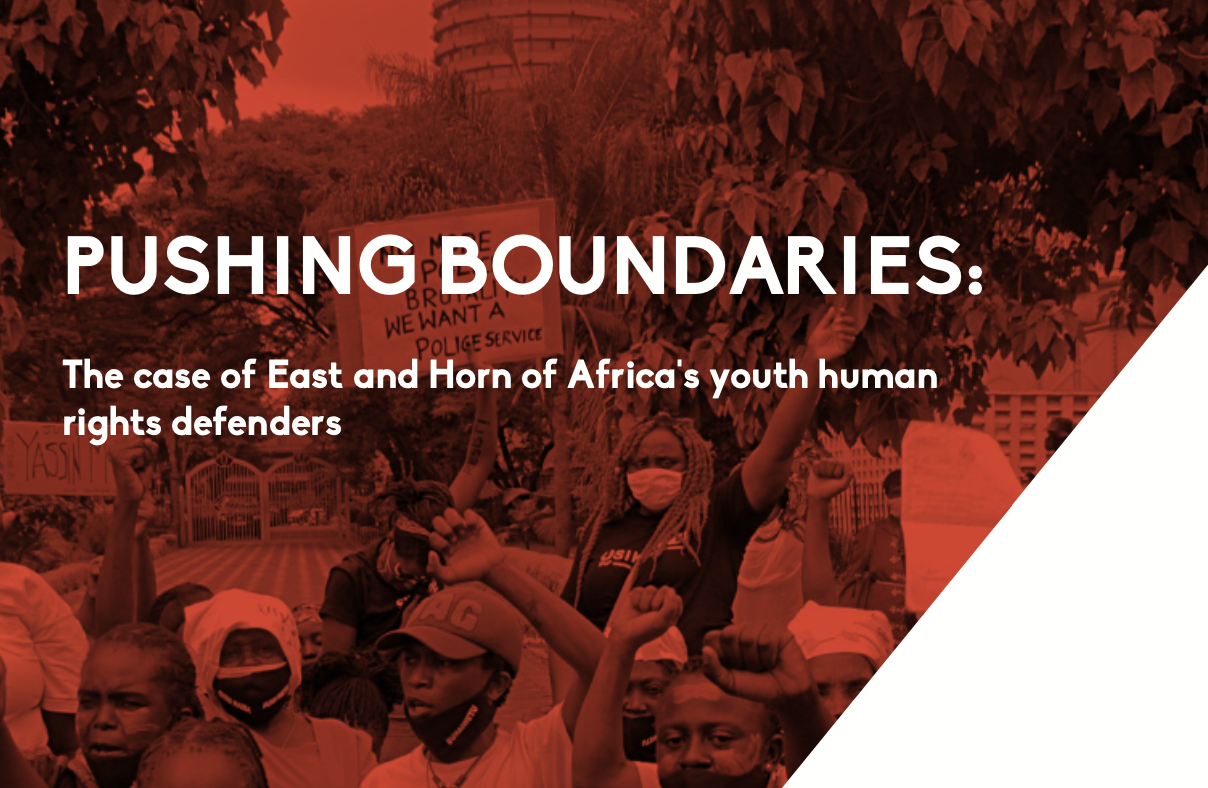 In a report published today, DefendDefenders and AfricanDefenders present a comprehensive summary of the case of East and Horn of Africa’s youth human rights defenders.

The report focuses on understanding their working environment in the sub-region, mainly focusing on the countries where we conducted in-person interviews. It analyses the drivers that influence young people’s actions as HRDs, examines the emerging trends in youth mobilisation, assesses the needs of youth HRDs and makes concrete recommendations to protect and promote their rights.

Youth HRDs form both organised and informal movements to bring about societal change or oppose injustice. The movements are formed in different ways, including, but not limited to, student strikes and protests, cultural forms of expression (literary, artistic, or musical creation), political movements, and environmental, peace, and antiwar movements.  As a result, youth movements have become an effective way to mobilise over relevant issues affecting them, and continue to be a significant force for societal change. However, the growth of the youth movements and the critical role played by youth HRDs to advance human rights makes them a target for attacks by both, state and non-state actors.

Desk-based research enabled the gathering of information on youth HRDs in Burundi, Rwanda, and Sudan, three countries where physical missions were not possible. On the ground research was conducted in Ethiopia, Kenya, Somalia/Somaliland, South Sudan, Tanzania, and Uganda.

The study analyses the drivers that influence young people’s actions as HRDs, examines the emerging trends in youth mobilisation, assesses the needs of youth HRDs and makes concrete recommendations to protect and promote their rights, as well as safeguard their civic space both online and offline.

Our findings show that compared to Ethiopia, Somalia/Somaliland, South Sudan, and Tanzania, youth movements in Kenya and Uganda are robust and more organised. Moreover, due to hostile operating environments, youth activists in Ethiopia, Somaliland, South Sudan, and to some extent Tanzania mainly work either in an individual capacity, or in existing grassroots organisations or human rights organisations that are not youth-led.

In Ethiopia, the civic space remains restrictive due to the conflict despite the favorable legal reforms to the operations of civil society organisations (CSOs). The authorities continue to target, intimidate, harass, arbitrary arrest, torture, and silence critics.  HRDs described Somaliland’s operating environment as dangerous. In South Sudan, restrictions on civic space, high levels of illiteracy, poverty, and insecurity are factors that limit organised youth movements. In Tanzania, youth activists apply self-censorship out of fear of repression and related persecution.

Despite Ugandan youth HRDs operating in a constrained environment, the research found that youth-led movements exist in Uganda both in rural and urban areas, where youth activists self-mobilise in associations, online groups, and physically. Similarly, in Kenya, the youth movement is vibrant. The social justice movements are largely youth-led, and most of the people who take part in physical and digital protests are young people.  However, in some cases, youth activism is divided along socio-economic classes. A large part of youth activism in Kenya focuses on police brutality and extrajudicial killings, with the victims and survivors often being poor youth from informal settlements.

Further, it shows that the scale of repression to youth led activities is proportional to whether issues they are involved in are contentious or not. Youth movements focusing on gender equality, the environment, and development are relatively freer to operate than their colleagues fighting for civil and political rights who face a higher risk of repression.