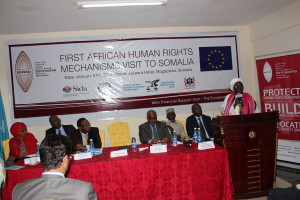 The East and Horn of Africa Human Rights Defenders Project (EHAHRDP) today concluded a high level mission to Mogadishu, Somalia, that marked the first visit to Somalia of a Special Mechanism of the African Commission on Human & Peoples’ Rights in the country’s history.

More than 80 Somali HRDs working on the promotion and protection of human rights in South Central, Puntland and Somaliland attended the interactive dialogue to discuss human rights protection, share personal experiences and testimonies on the situation of HRDs, and engage in dialogue with Hon. Commissioner Gansou and ministers from the Somali Federal Government.

Commissioner Gansou noted the ACHPR’s longstanding interest and commitment to human rights in Somalia. “The African Commission has passed resolutions on the food crisis, on the rights of women and children, on the rights of journalists, and on the situation of human rights defenders in Somalia”, the Honourable Commissioner said today. “Today is the beginning of a long process. The African Commission will continue to work with human rights defenders and the government of Somalia, and I hope to see many of you at our next session”.

The African Commission on Human & People’s Rights (ACHPR) is the African body with responsibility for interpreting, and passing judgment upon, the human rights performance of African States across the continent. “Somalia has been a country of concern for the ACHPR for several years, passing several Resolutions that voice concern at the hostile environment for human rights defenders and journalists”, said EHAHRDP’s Executive Director Hassan Shire. “Commissioner Gansou’s visit is a historic milestone. It marks the first time that a Special Mechanism of the ACHPR has actually visited Somalia, and engaged directly with HRDs, the government, and international community. I am indebted to Commissioner Gansou for her commitment to Somalia, and to her mandate”.

Prior to the conference, on 26th January, Commissioner Gansou and the EHAHRDP delegation met with Ambassador Nicholas Kay, UN Special Representative of the Secretary General for Somalia, who was able to brief Commissioner Gansou on the UN’s perspective on the situation facing human rights defenders in Somalia. 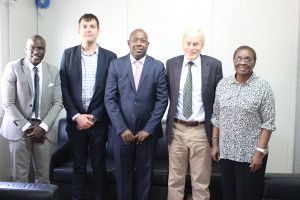 The delegation also met with Hon. Lydia Wanyoto Mutende, Deputy SRCC for the African Union Mission in Somalia (AMISOM), along with several senior team members of the African Union Department of Political Affairs. 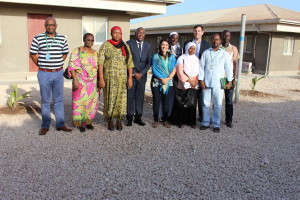 Finally, on 27th January, Commissioner Gansou and the EHAHRDP delegation were honoured to be received by His Excellency Hassan Sheikh Mahamoud, President of Somalia. His Excellency was briefed by Commissioner Gansou on her observations from her visit to Somalia, and her discussions with Somali HRDs, government ministers, and intergovernmental organisations. In parallel, His Excellency was able to brief the delegation about the Somali Government’s ongoing commitment to improving the human rights in the country. 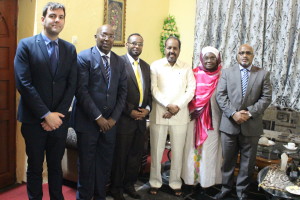