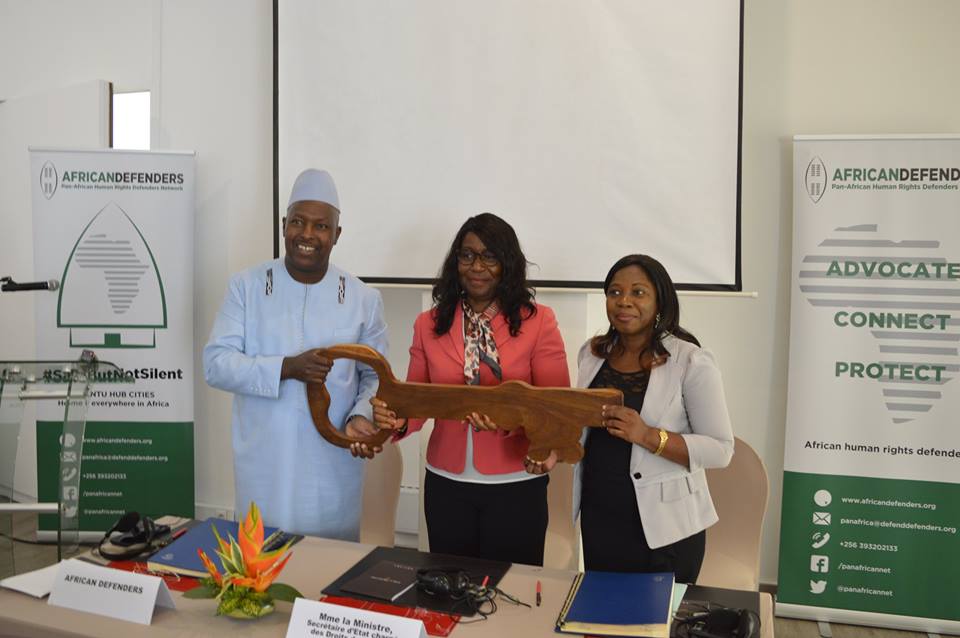 On 14 February 2019, AfricanDefenders (the Pan-African Human Rights Defenders Network) launched the Ubuntu Hub Cities in Abidjan, Côte d’Ivoire – an Africa-based relocation programme for human rights defenders (HRDs) at risk. “Côte d’Ivoire is the first country in Africa to have adopted and  implemented a specific law for the protection of HRDs” said Hassan Shire, Chairperson of AfricanDefenders. “That is why we identified Abidjan as a place where francophone HRDs can be protected, and find the right cultural context to enhance their activism”.

The launch brought together about 50 representatives from the Ivorian civil society, as well as government officials, regional and international organisations, national media and embassy representatives. Hon. Aimee Zebeyoux, State Secretary in charge of human rights in Côte d’Ivoire, opened the launch ceremony, praising the value of the Ubuntu Hub Cities initiative, and expressing her satisfaction with the choice of Abidjan as a hub where HRDs can be safe and empowered. “The adoption of law 2014-388 of 20 June 2014 has made Côte d’Ivoire a pioneer on the continent” said Hon. Zebeyoux. “Whether you are a journalist, an environmental activist, a whistleblower, a trade unionist, a lawyer,   a member of a charitable association, or an occasional activist, you can be protected in Côte d’Ivoire”.

On the African continent, HRDs continue to face threats, reprisals, and physical and mental violence as a consequence of their human rights work, and are sometimes forced into exile. In this context, the Ubuntu Hub Cities initiative allows HRDs to temporarily relocate, to take a break from a situation of high pressure, and continue their work in a safe working environment. Through diverse local partnerships with academic institutions and civil society organisations (CSOs), the HRDs under the relocation programme can also gain new skills to enhance their human rights work.

To mark the official launch of the initiative, Marthe Coulibaly, Coordinator of the Ivorian Coalition for Human Rights Defenders (CIDDH), the main local implementing partner of the Ubuntu Hub Cities initiative in Abidjan, received a key that symbolises HRDs’ access to the hub city of Abidjan – an exchange witnessed by Hon. Zebeyoux. Further, an Memorandum of Understanding (MoU) was signed to guide the joint efforts by CIDDH and AfricanDefenders in the implementation of the initiative.

Coulibaly stressed that the Ubuntu Hub Cities initiative will strengthen solidarity networks of HRDs across the continent, and called for the establishment of an independent mechanism for following up on the effective implementation of national laws on HRDs in Côte d’Ivoire. “I am convinced that these initiatives will strengthen HRD protection in the country,” said Coulibaly.

“To me, this initiative of a city for HRDs seems to be a practical response to the theoretical formulation of the Ivorian law for the promotion and protection of HRDs” added Prof. André Kamaté, lecturer and researcher at the University of Cocody.

Alphonsus Gbanie, Executive Secretary of the Human Rights Defenders Network in Sierra Leone,stressed the value of a structured relocation programme that can help relocated HRDs to overcome language barriers and psychosocial challenges, taking into consideration support for HRDs’ family. Indeed, tackling issues of cultural displacement, stigmatisation, and integration is a key preoccupation of the Ubuntu Hub Cities.  Based on best practices and lessons learnt from similar relocation programmes, this initiative is specifically tailored to African HRDs to allow them to remain on the continent and continue their work.