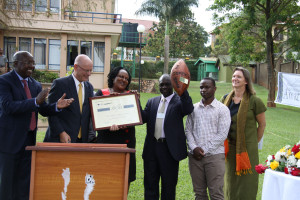 One of Uganda’s leading human rights defenders, Mr. Livingstone Sewanyana, Executive Director of Foundation for Human Rights Initiative, was honoured in a surprise awards ceremony this afternoon in Kampala. The African Human Rights Defenders Award recognizes individuals from Africa bravely working to advance human rights in the face of adversity..

Mrs. Margaret Sekaggya, UN Special Rapporteur on human rights defenders, Hon. Commissioner Reine Alapini-Gansou, Special Rapporteur on human rights defenders in Africa and Mr. Hassan Shire, chairperson of PAHRDN and the East and Horn of Africa Human Rights Defenders Network formed the jury that selected the eventual winners, after nominations were received from across the continent.

“We are honouring Mr. Sewanyana for his tireless efforts to promote respect for human rights in Uganda and in the wider East and Horn of Africa region,” said Mr Shire.

H.E Alphons Hennekens, Ambassador of the Kingdom of Netherlands in Uganda, formally presented the award to Mr. Sewanyana at a ceremony held at Human Rights House, Nsambya on Thursday 31st October 2013 that highlighted the important work of human rights defenders in Uganda.

We, the undersigned human rights non-governmental organizations (NGOs), strongly urge the UN Human Rights Council (HRC) to hold a special session on the ongoing human rights crisis in Ethiopia and to establish a robust investigative mechanism in that context.

As the African Commission on Human and Peoples’ Rights holds its 69th ordinary session, DefendDefenders and the South Sudan Human Rights Defenders Network (SSHRDN), call on the government of the Republic of South Sudan to respect the rights of its citizens to peacefully assemble, associate, and express opinions and views, strengthen the legal framework that allows citizens and civil society organizations to form and operate without any hinderances.

DefendDefenders, requests for proposals/bids for Developing DefendDefenders Board Charter. The request for a proposal document is attached below.

Tanzania should use its human rights review at the Uni­ted