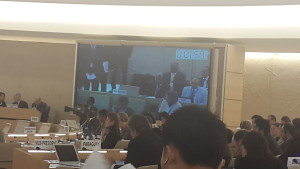 Many of these members of civil society are from small and overlooked countries that rarely feature on your agenda. They seek an indication that the UN’s key human rights body cares about their concerns, and they seek a safe space in which to do so.

As you have heard repeated many times over the course of the last three days, the human rights struggle is becoming exponentially more difficult across the globe.

In parallel, the operating space for those that defend human rights is becoming more restrictive. The range of human rights challenges that this Council must address is growing in scale. The complexity of actors involved is expanding, and the centres of power are shifting.

As noted by the Government of Switzerland on Monday, “the efforts of the international community in favour of human rights must include non-state actors, including civil society”.

This has never been more important.

On Monday, the High Commissioner for Human Rights expressed how deeply disturbed he was “by the reprisals and smear campaigns that are all too frequently exercised against representatives of civil society, including those who engage with the Council and its bodies”.

With this, I concur.

Just yesterday, a human rights defender who I was in the process of supporting to travel to Geneva to speak to you next week, was bundled into the back of a car in his home country. Security agents, representing the government of a state present in this chamber, placed guns against his head, and warned that he, and his family would be killed if he attempted to travel to Geneva to brief you.

This is but one chilling illustration of a much wider issue that the Human Rights Council has yet to adequately address.
buy vilitra generic cialisnextdaydeliveryusa.com/vilitra.html over the counter

The Council has been made aware- on numerous occasions- of serious issues of intimidation, detention, enforced disappearances, and worse against civil society members from across the world who have sought to engage in this room.

I urge the Council at this session to adopt a robust and meaningful protection system for civil society members speaking here, as it is legally obliged to do.
buy vidalista generic cialisnextdaydeliveryusa.com/vidalista.html over the counter

This system must be consistent with the support available under other UN mechanisms, and should include direct collaboration with regional and national human rights mechanisms across the world.

Recently, the African Commission on Human and Peoples’ Rights has begun codifying a procedure for monitoring, documenting, and addressing cases of reprisals against civil society accessing its own corridors of power.

The Human Rights Council must do the same. It should not be playing catch-up with regional human rights systems.

This need is urgent. The risks facing global civil society in speaking truth to power are growing, and this chamber must remain a safe and protected environment which counters this global trend.