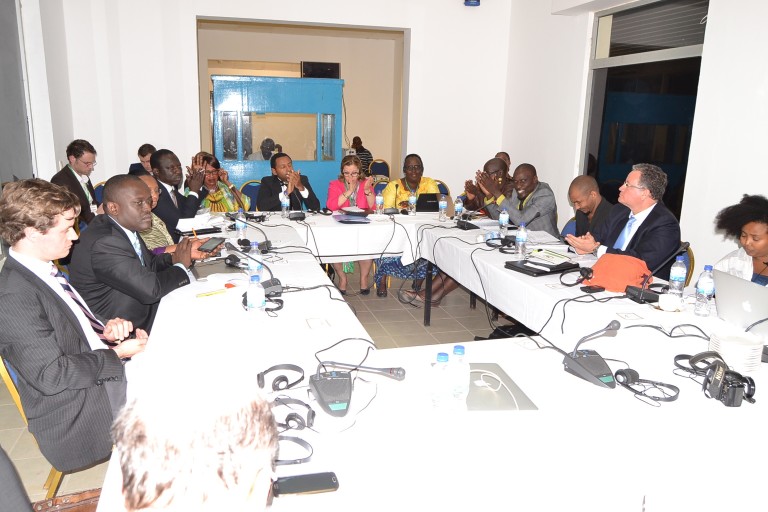 As declared by the African Union Assembly, 2016 is the “Africa Year of Human Rights with particular focus on the rights of women”. The continent continues to bear challenges for a transparent, democratic and accountable environment in respect of human rights and rule of law. This year is an opportunity to reflect on what is required to have a strengthened and effective African human rights system. Furthermore, what action is needed for States to comply with their obligations under the African Charter on Human and Peoples’ Rights?

At the concluded 58th Ordinary Session of the African Commission on Human and Peoples’ Rights in Banjul, Islamic Republic of The Gambia, DefendDefenders (East and Horn of Africa Human Rights Defenders Project) engaged in various activities, not only to highlight challenges facing the East and Horn of Africa region, but also to express concern about the lack of political will to urgently address human rights violations, impunity and non-compliance with international laws.

DefendDefenders supported the participation of human rights defenders (HRDs) from Burundi, South Sudan and Uganda at the NGO forum and the 58th Ordinary Session.

Freedom of Association and Assembly: “When can the right to freedom of peaceful assembly and association be restricted?”

During the NGO Forum, a panel was convened by DefendDefenders and its partners to discuss the status of freedom of association and peaceful assembly in Africa. With its recent election and related clampdown on these freedoms, Uganda was presented as a case study by Mr. Pepe Julian Onziema, a member of the DefendDefenders delegation.

The debate was co-hosted with the ACHPR study group on Freedom of Association and Peaceful Assembly, which was mandated to provide an analysis of the legal framework regulating these fundamental freedoms in Africa, and whose report was concluded and launched during the 56th ordinary session. A new resolution has given mandate to the study group to draft guidelines on freedom of association and peaceful assembly.

Talking at the event Mr. Pepe Julian Onziema discussed the impact of the Non-Governmental Organisations Act (2016) and the Ugandan Public Order Management Act (2013) on the ability of CSOs and HRDs to practice these freedoms in Uganda. He recommended that the ACHPR engage the Ugandan government through country visits to assess Uganda’s legal framework on freedom of association and peaceful assembly – a recommendation which extends to all state parties.

Role of the African Union: African Solutions to African Problems

Citizens of our continent are facing increasingly violent, and sometimes seemingly intractable crises and conflicts, such as in South Sudan and Burundi. The role of the African Union (AU) in addressing widespread human rights violations has never been more critical, and on 7 April 2016, the DefendDefenders delegation organised a parallel event to discuss ways the ACHPR and the AU can better respond to human rights crises in Africa. Human rights defenders from Burundi and South Sudan participated as panelists to share their perspective of defending rights and fighting impunity in countries that have experienced widespread, systematic and gross human rights violations by both state and non-state actors.

In both these countries the AU has mandated bodies to monitor, document and report on the crises while providing recommendations to improve the country situations. Unfortunately, despite these interventions, the Burundian and South Sudanese people continue to suffer and thousands flee to safer places.

On a continent whose leaders pride themselves in finding solutions to their own problems, the ACHPR must be strengthened to uphold the African Charter and ensure member states fulfil their duties and obligations under the Charter.

In the same vein Ms. Maureen Achieng Akena, Executive Director, Center for Citizens Participation on the African Union stated during the event: “It doesn’t matter that it is happening in South Sudan or in Burundi, I have a responsibility as a Kenyan to ask my government to intervene, because my government has signed up to do so.” We all have a responsibility to hold our governments accountable and to demand that they engage in a concrete and substantial manner with the African Union processes to find solutions to “African problems”.

Activity reports of the special procedures of the ACHPR

The Commissioners reported on their inter-session activities and shared their findings under their specific mandates, some of which are key to the work of HRDs.

In her activity report, Advocate Faith Pansy Tlakula, the Special Rapporteur on Freedom of Expression and Information in Africa launched a project on the development of two sets of guidelines, including the Guidelines on Access to Information and Elections. These will be an essential tool for strengthening democracy, good governance and citizen participation in public affairs, particularly during often-tense electoral periods.

In the sub-region, we have witnessed first-hand the restriction of access to information during electoral periods – in Burundi and Uganda, social media blackouts hampered civil society’s ability to communicate and monitor the elections. I urge African states to respect the right to access information during electoral processes, which is a means of guaranteeing the credibility of elections.

I join Commissioner Tlakula’s call to state parties to amend their Constitutions and laws in order to bring them in line with regional and international standards on freedom of expression and access to information.

I welcome all resolutions adopted at this session specifically the 2 that directly affect the work of human rights defenders;

Interventions made during the session

ACHPR58: Report submitted to the African Commission on Human and Peoples’ Rights

ACHPR58: Oral statement on the human rights situation in Africa

ACHPR58: Statement on the Activity Report of the Special Rapporteur on HRDs in Africa