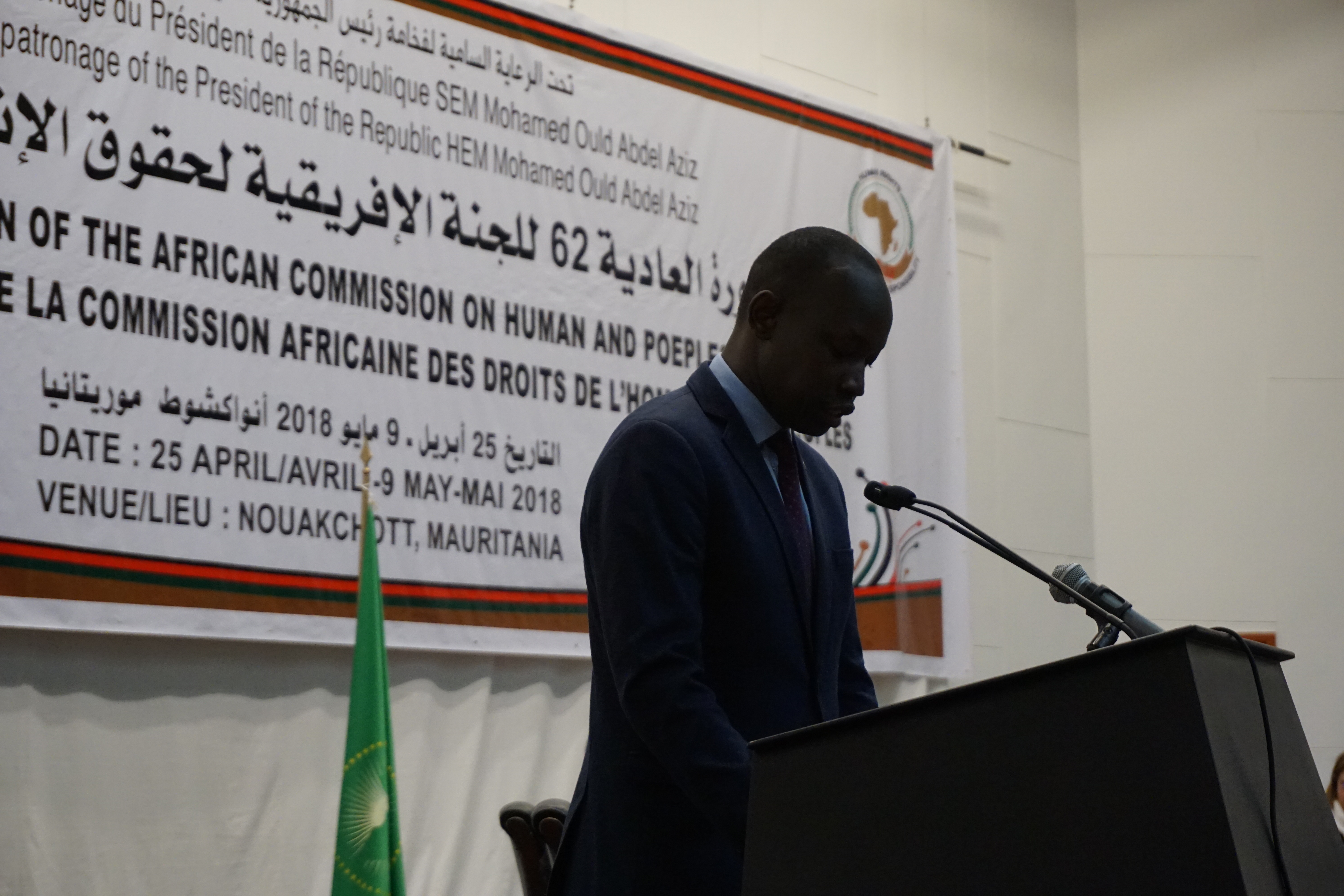 Although great strides towards improving the human rights situation in Africa are being made, the same cannot be said for the East and Horn of Africa. The Civic Space Monitor rates six of the countries covered by our mandate as closed,  despite the adoption by this Commission of the Guidelines on Freedom of Association and Assembly that set best practices relating to civic space.

Like in Burundi, the UN Commission on human rights in South Sudan recently concluded that crimes against humanity and war crimes may have been committed during the civil war.  There is a persisting culture of impunity and human rights defenders work in increasingly dangerous conditions, targeted by both state and non-state actors.

While we welcome the peaceful transition and release of some political prisoners, journalists and bloggers in Ethiopia, including Teshome Seyoum, they should never have been arrested and detained in the first place. Additionally, we are deeply concerned with the ongoing state of emergency that infringes on the enjoyment of basic human rights of citizens, and hampers the work of human rights defenders and journalists.

Madam Chairperson, we acknowledge the decision of the government of Eritrea to submit its initial and periodic report  for review at this session. However, we  question the willingness and seriousness of the Eritrean government to effect progressive change or address violations of human rights in its territory. Madam Chairperson, this August body issued decisions on Eritrea but none of them have been implemented.  The “African solution to this African problem” falls on the Commission to refer Eritrea to the African Union Executive Council for failure to comply with its decisions.

Burundi was recently described by the UN High Commissioner on Human Rights as being among “the most prolific slaughterhouses of humans in recent times.” Repression by the government and Imbonerakure militia has only intensified in the run-up to the controversial referendum that would allow President Nkurunziza to serve another two terms after 2020.  We are particularly concerned with the detention of human rights defenders Nestor Nibitanga and Germain Rukuki, who is facing a life sentence on charges relating to his work.

The government of Tanzania continues its crackdown on free expression, most recently by adopting sweeping regulations that impose an exorbitant fee of 930 US dollars to license an online blog. Additionally, in the past year alone, at least 55 human rights defenders were arrested while attending private gatherings, and two environmental activists killed.

Kenya concluded hotly contested elections in August and October 2017. Civil society organisations who documented violations by the police were threatened with deregistration and criminal sanctions. The Public Benefits Organisations Act (2013) has not been implemented despite court orders.

Lastly, what can civil society do to support the African Commission in addressing these crises at the African Union level.