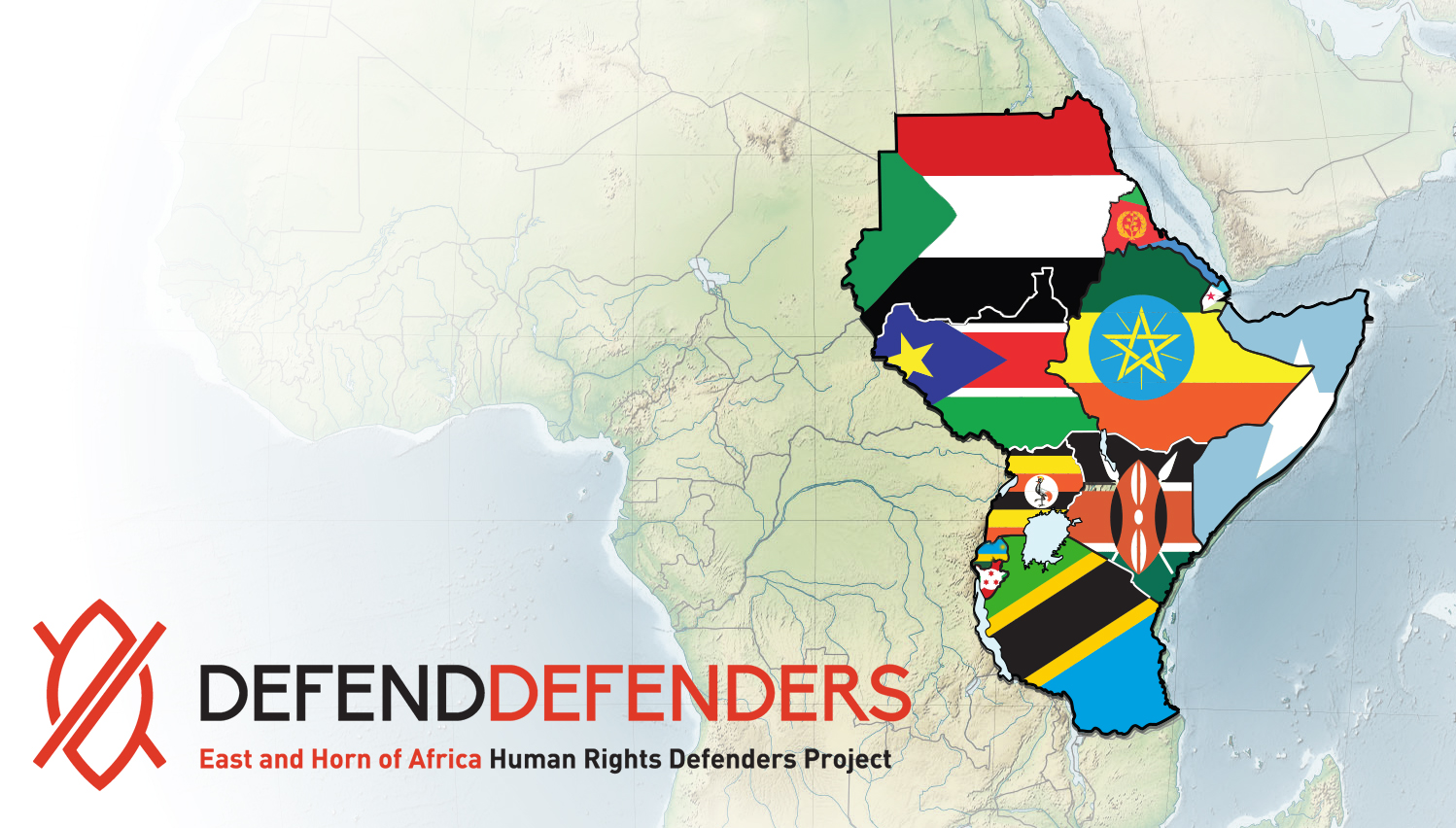 In its bi-annual report to the African Commission on Human and Peoples’ Rights (ACHPR), DefendDefenders highlights the most pressing human rights issues in the East and Horn of Africa sub-region from October 2020 to April 2021, focusing on issues pertaining to civic space (freedoms of opinion and expression, peaceful assembly and association, as well the situation of human rights defenders (HRDs).

The submission includes trends and developments for each of our mandate countries. Additionally, it features a series of recommendations to the ACHPR, formulated with a view to improving human rights protection and promotion in the 11 countries concerned.

Respect for democracy, rule of law and human rights in the sub region continues to be tested by the ravaging COVID-19 pandemic, in addition to deliberate government actions aimed at curtailing democratic and civic space. During this period, governments in the sub region misused laws, regulations, and directives geared at curbing the spread of the pandemic to steer abusive political agendas. There were increased reports of violations of the rights to freedoms of opinion and expression, association, and peaceful assembly. States are cautioned that all restrictions to prevent the further spread of coronavirus must be temporary, lawful, non-discriminatory, strictly necessary, and proportionate.

Additionally, this period witnessed government changes in several countries. In Tanzania, President John Pombe Magufuli passed away in March 2021. Samia Suluhu Hassan was sworn in as new President, promising reforms towards press freedom, due process, a scientific approach to COVID-19, and an open foreign policy. Other countries in East Africa conducted elections in processes that were criticised as not free or fair. Uganda, Djibouti and Tanzania went to the polls that saw the incumbent respective heads of states re-elected to office in flawed processes. In the case of Djibouti, the election process and operations completely lacked credibility. The political climate in these countries was reported as restrictive with infringements on press freedom and political opponents harassed. This statement illustrates key infringements on democracy, rule of law and human rights.

Burundi has been in a state of political, human rights, and humanitarian crisis since April 2015. Grave human rights violations and abuses have been documented, affecting a range of civil, political, economic, social, and cultural rights. The environment for civic space and human rights defenders (HRDs) remains restrictive. With the May 2020 elections, the sudden passing of President Pierre Nkurunziza, and the swearing in of a new President, Évariste Ndayishimiye, in June 2020, there was hope that the country would change course, but these hopes are yet to materialise. Recent months have witnessed positive signs, for instance the authorities’ release of detained journalists. Burundi and its partners may now attempt to normalise relations; however, the human rights situation remains serious.

Djibouti and Eritrea remain closed authoritarian regimes, ranking among the most repressive for freedoms of expression, peaceful assembly and association, and for HRDs in Africa. In Djibouti, the political scene is closed with no short-term prospects for change. This was evident again in the April 2021 presidential election, which saw the re-election of President Ismail Omar Guelleh with over 98% of the vote. Eritrea remains under the dictatorial rule of President Isaias Afwerki, with no opposition parties or independent civil society organisations. Grave violations continue to be reported with complete impunity. Since November 2020, concerns have been mounting over Eritrean forces’ involvement in Ethiopia’s Tigray region and possible crimes under international law they may have committed against civilians, and attacks against Eritrean refugees and refugee camps.

The human rights situation in Ethiopia deteriorated during the reporting period as armed conflict continued in Tigray. Some of the violations, committed by all parties to the conflict, including attacks against civilians and ethnic cleansing, may amount to crimes under international law. The government restricted the freedom of expression and access to information by shutting down the internet and closing phone lines. The conflict has the potential to destabilise the country and threaten progress registered since April 2018, including regarding civic space. In March 2021, the Office of the UN High Commissioner for Human Rights (OHCHR) and Ethiopia’s national human rights commission (EHRC) announced a joint investigation into violations, and Prime Minister Abiy Ahmed acknowledged that atrocities took place. These important steps towards truth must be followed by further steps to achieve justice and accountability.

Kenya, a multi-party democracy, continues to grapple with violations, including extrajudicial killings, enforced disappearances, and torture, often committed by security forces in the name of combating terrorism or against the youth from disadvantaged slum areas. Although civil society enjoys a space that is broader than in most of Kenya’s neighbours, HRDs working on specific topics, including business and human rights, indigenous peoples, and sexual orientation and gender identity, face threats. Restrictive laws, including Cybercrime Act 2018, are used to target activists, politicians, journalists, and bloggers that are critical of authorities.

In Rwanda, avenues for peaceful dissent remain largely closed. Severe restrictions on the rights to freedom of opinion and expression, peaceful assembly, and association, are in place. Political parties, civil society organisations, and the media are under intense pressure. The government continues to target, harass, arrest, and intimidate journalists, activists and HRDs.

Tensions continue to raise in Somalia, and the security situation remains precarious. Grave human rights violations continue with impunity. Terrorist group Al Shabab retains control over parts of the territory and commits grave abuses through armed attacks. Journalists are targeted by both state and non-state actors through defamation and use of national security provisions of the Penal Code. Several have been arbitrarily arrested and detained, and one killed during the reporting period. The country is now in a political deadlock, as political factions have failed to agree on the election process. In February 2021, President Mohamed Abdullahi Mohamed “Farmaajo’s” term ended with no clear path toward national elections.

South Sudan continues to face active fighting in parts of the country, and myriads of local-level and intercommunal violence threaten to spiral out of control and destabilise the country. South Sudan remains one of the most restrictive countries in the East and Horn of Africa sub-region. It is dangerous for civil activists and journalists to voice their opinions. Patterns of sexual violence, grave violations, and international crimes continue to be reported, including deliberate targeting and starvation of civilians. Justice and accountability remain elusive.

Duing the reporting period, Sudan continued to take steps to open the democratic and civic space, and to improve respect for women’s and girls’ rights. In February 2021, Sudan announced that it would accede to the Conventions against Torture (UNCAT) and on Enforced Disappearance (CED). As UNAMID ceased its operations, the humanitarian situation remains serious. Violence against civilians and intercommunal violence have been increasing, especially in West Darfur. Concerns also remain over the influence of the military and security forces both within the executive and the economy. Accountability for the violations and abuses committed under the former regime, both in Khartoum on 3 June 2019, and in other parts of the country, including conflict and former conflict areas of Darfur, Blue Nile, the Eastern Region, and South Kordofan, over the last three decades, remains elusive. However, in February 2021, Sudan, and the International Criminal Court (ICC) signed a cooperation agreement on Ali Al-Kushayb’s trial. The UN Integrated Transition Assistance Mission in Sudan (UNITAMS) is now operational.

Over the last five years, Tanzania slid towards authoritarianism. The re-election of President John Magufuli, in October 2020, came against the backdrop of a series of repressive laws and extra-legal measures used by the government to restrict the space for independent actors. Several political opposition members were subjected to physical attacks. Fear and self-censorship rose as media houses saw their licenses suspended or revoked, HRDs were detained, lawyers disbarred, and human rights NGOs targeted. Post-election repression was denounced by international actors. The sudden passing of President Magufuli, in March 2021, and the swearing in of President Samia Suluhu Hassan, offers hope. In early speeches, President Hassan indicated that she intended to uphold freedom of expression and due process and to address the COVID-19 pandemic. She also ordered the Information Ministry to lift the ban on all media outlets that were suspended or punished.

During Uganda’s election period, political opposition members and supporters, journalists, and activists were targeted. There was a spike in targeted attacks against HRDs, journalists, and opposition members. Electoral violence rose during party primaries. The election results were contested. Several journalists reporting on the election were arrested and beaten. As many as 430 political opposition supporters may have been abducted and some tortured. The government dispersed peaceful protests using excessive and unwarranted violence and arresting protestors. Ugandan citizens’ rights to freedom of opinion and expression, peaceful assembly and association are increasingly under pressure. The country, however, remains a hub for HRDs in the sub-region. A law on the protection of HRDs is currently under consideration by the Parliament.

In light of the updates and trends observed, DefendDefenders makes the following recommendations for action by the African Commission on Human and Peoples’ Rights: