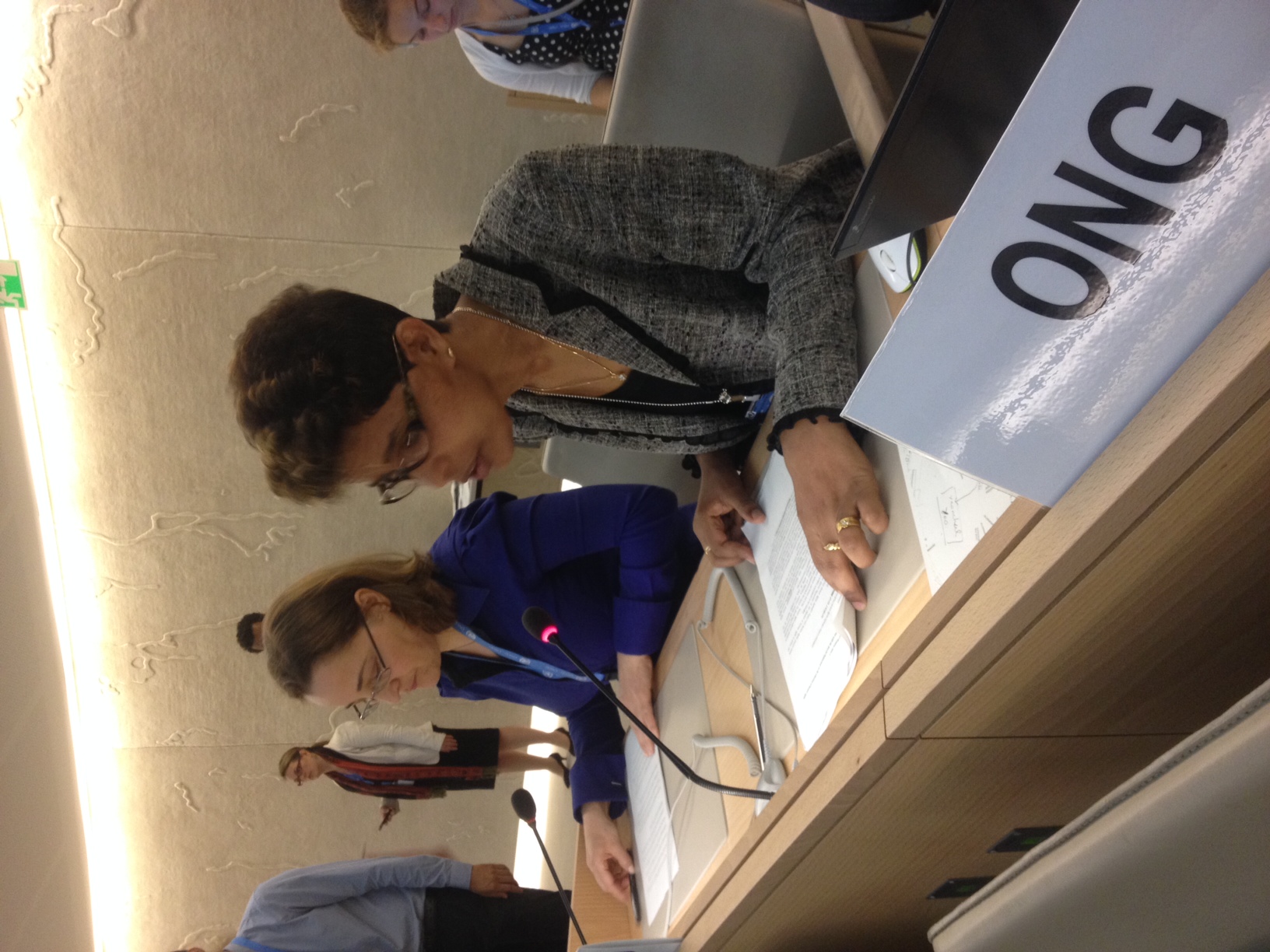 Reflection on the 26th Session of the Human Rights Council

Whilst EHAHRDP’s core mandate is the provision of protection interventions to human rights defenders at risk, an equally critical aspect of our work is our advocacy at regional and international human rights bodies. We consistently engage at every session of the United Nations Human Rights Council in Geneva; supporting human rights defenders in the region to access the ‘corridors of power’, and to advocate directly for enhanced protection mechanisms and greater international recognition for their vital work.

My team and I attended the Human Rights Council over the course of two weeks at its recently concluded 26th session in Geneva. This session came with some significant achievements and strides towards the advancement of human rights across the sub region, but was matched by some concerning and regressive moves by the Council and some of its member states. Equally, I continue to feel that the Human Rights Council is failing to adequately address a number of critical human rights concerns, including the dire situation in South Sudan.

At this session, EHAHRDP supported, accredited, and worked closely with a number of human rights defenders from across the region, including from Eritrea and South Sudan.

As many of you will know, my organisation has an extensive history in South Sudan, that long predates its independence. EHAHRDP hosted its annual flagship capacity building workshop, ‘Claiming Spaces’ in Juba from 9th to 13th December 2013, and published an extensive report that same week, detailing the closing space for human rights defenders in the country since it achieved independence.

EHAHRDP’s team returned to Kampala from Juba just one day before violence engulfed the country. Since then, we have worked tirelessly to support the many human rights defenders who have been forced into exile on the basis of their work, and to enhance our support to those that remain in the country.

Even before the current conflict, the Human Rights Council has failed to adopt a position on South Sudan that adequately reflects the reality on the ground. Now, with a recent report from the UN Mission in South Sudan indicating gross violations of human rights on a massive scale, it is deplorable that the world’s pre-eminent human rights body continues to address the human rights situation in South Sudan by way of ‘Agenda Item 10’ (countries requiring technical assistance’).

To correct this flawed narrative, EHAHRDP worked closely with South Sudanese and international partners to raise the profile of South Sudan at this current session. Together with Human Rights Watch, and our close partners the South Sudan Law Society, on 19th June we coordinated a public briefing on the increasingly desperate human rights situation in South Sudan, attended by numerous country representatives. 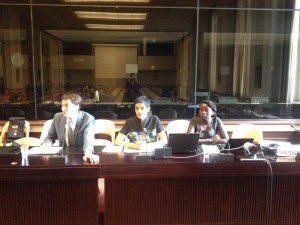 On 20th June, EHAHRDP coordinated with twenty other African NGOs from across the continent, in calling on the African Group at the Human Rights Council to reject or substantially amend a deeply flawed resolution on South Sudan, drafted by South Sudan itself.

As a result of our advocacy efforts together with our partners, the resolution on technical and capacity building assistance for South Sudan in the field of human rights was adopted with somewhat stronger language, deploring the violations of human rights and international humanitarian law that have occurred in the aftermath of the events of 15th December 2013. The resolution further demanded a halt to all violations, stressing that the perpetrators of these violations must be held accountable and brought to justice. This is a modest step forward for the many victims of the current conflict, but the Human Rights Council has an obligation to take more decisive action in future.

Perhaps the greatest achievement from this session was the establishment a Commission of Inquiry into the human rights violations committed by the Eritrean government against its own people- only the third such Commission in the UN’s history (following Syria, and the Democratic Peoples Republic of Korea). In parallel, the vital mandate of the UN Special Rapporteur on the Situation of Human Rights in Eritrea was renewed.

Eritrea is one of the world’s most repressive and closed regimes, where monitoring of human rights is virtually impossible. The systematic human rights violations range from severe restrictions on freedom of expression, association and assembly, indefinite periods of national service, child labour, arbitrary and extrajudicial execution, enforced disappearance to use of torture and incommunicado detention without recourse to justice. To highlight these issues EHAHRDP together with Human Rights Concern Eritrea, Human Rights Watch, Amnesty International, Christian Solidarity Worldwide, the Stop Slavery in Eritrea Campaign, and other international organisations held two successful and well-attended side events to raise the profile of Eritrea and draw attention to the violations being committed in the country. 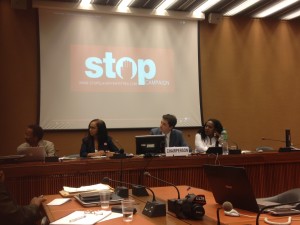 Ms. Elizabeth Chyrum from Human Rights Concern Eritrea (HRC-E), a member of our network delivered an oral statement on behalf of EHAHRDP and HRC-E during the interactive dialogue with the special rapporteur on the situation of human rights in Eritrea, condemning the human rights violations and urging the council to establish a Commission of Inquiry on human rights in Eritrea. 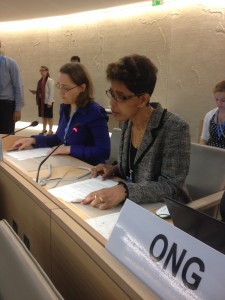 Eritrea had its human rights record reviewed at the 18th session of the Universal Periodic Review. Despite Eritrea appearing before its peers to discuss its human rights record, it continued to deny the gross human rights violations committed by its government and rejected many recommendations from other states to specifically abolish military conscription for children or put an end to the widespread use of torture and other cruel, inhuman or degrading treatment.

EHAHRDP’s Advocacy and Research Officer, John Foley delivered a statement during the adoption of the report of the Working Group on Eritrea, where we advocated for the establishment of a Commission of Inquiry into human rights situation in the country.

To illustrate the growing pattern of states sharing ‘worst practices’ to silence the legitimate work of human rights defenders across East Africa, EHAHRDP, CIVICUS, Article 19, Human Rights Watch and the Ethiopia Human Rights Project organised a side event on 12th June to discuss the challenges that HRDs in the sub region are facing. As one of the panellists, I was honoured to be joined by Maina Kiai, the UN Special Rapporteur on rights of freedom of assembly and association, and human rights defenders from Ethiopia and Kenya.

Journalists are fundamental in the protection and promotion of human rights through exposing human rights violations and exposing human rights violators. They bring national concerns to light and frame areas of public debate. However due to the nature of their work, in our sub-region they invariably become targets of state and non-state actors. The Human Rights Council’s panel discussion on their safety was a welcome initiative. EHAHRDP delivered a statement during this interaction, illustrating the risks faced by journalists in our sub region and calling on the HRC to implement effective mechanisms to ensure their safety.

On 10th June 2014, the Council held a clustered interactive dialogue with the special rapporteurs on freedom of expression, assembly and association where these special procedures presented their reports. We ensured that we delivered a statement in reaction to the reports as the rights to freedom of expression, peaceful assembly and association are among the most infringed rights in this sub region. In our statement, we echoed the Special Rapporteur on Freedom of Expression’s call for states to take measures to eliminate the structural, legal, and practical barriers to the enjoyment of the right to freedom of expression.

On a negative note, it was extremely disappointing to note that the Human Rights Council adopted a profoundly flawed resolution on the ‘protection of the family’, which failed to recognise the inherent diversity of family life. The adoption of this resolution is a setback in the global struggle to end discrimination against persons on the basis of their sexual orientation or gender identity. Shamefully, Russia raised a “no action” motion, a procedural tactic designed to prevent proposed language amendments to the resolution (including the issue of diversity of families) from being discussed. As I have written on previously, the African Commission on Human and Peoples’ Rights passed a landmark resolution earlier this year on the rights of persons of minority sexual orientation and gender identity. It is concerning to see that the Human Rights Council is following a more regressive path on this issue.

With the 26th Session of the Human Rights Council now concluded, our efforts now move to the 27th Session, which begins in September 2014. EHAHRDP will again support human rights defenders from across the region to attend, and continue to advocate for enhanced protection mechanisms to support them in their vital work.