Blog Post: Reflections on the 27th Session of the UN Human Rights Council 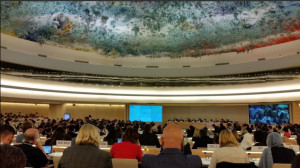 The recently concluded 27th Session of the UN Human Rights Council in Geneva, which I attended on behalf of EHAHRDP, saw some encouraging global developments, including the passage of two important Resolutions on the protection of civil society space, and on sexual orientation and gender identity.

In parallel, this Session saw some encouraging (albeit, ultimately inadequate) strides towards addressing entrenched human rights concerns in this sub-region- notably in South Sudan. As always, EHAHRDP’s advocacy team supported national level human rights defenders to attend the Human Rights Council, and facilitated a number of meetings with key international decision makers. In addition, my team and myself delivered relevant public statements and organized a number of successful side events- all of which were framed around the challenges facing human rights defenders in the region.

On 15th September, EHAHRDP, along with our close partners CIVICUS World Alliance for Citizen Participation organised a major side event, ‘Human Rights in Ethiopia: Government Repression and Failed Commitments’. The event featured a number of close and long-standing partners of EHAHRDP, including Mesfin Negash of Civil Rights Defenders, and Yared Hailemariam (formerly of the Ethiopian Human Rights Council).

Over the last several years, EHAHRDP and CIVICUS have been working together to organize events at every session of the Human Rights Council, in order to

garner international attention on the deteriorating human rights situation in Ethiopia, especially with regard to the draconian restrictions placed on freedoms of association and of expression. It is telling that all of the speakers at this Session’s side event are human rights defenders in exile.

This year, the widely publicized mass arrests of nine journalists and bloggers (including six members of the ‘Zone 9’ collective) led to broad international condemnation from a number of governments, and from the Office of the High Commissioner for Human Rights. There is however, a stark contrast to be drawn when we look at the Human Rights Council’s near complete silence on this issue. Ethiopia’s status as a powerful Council member should not blind other member states to the severity of the human rights situation within the country.

The only member of Zone 9 charged in absentia, Soliyana Gebremichael, joined the panel discussion via a live video-link up from the United States. EHAHRDP has worked closely with Soliyana over the course of the last several Sessions of the Human Rights Council, and she is an extraordinarily capable and committed human rights defender. The ludicrous and indefensible charges brought against her by the Ethiopian state prevented her from traveling to this Session, but we were delighted that she was nonetheless able to brief a wide spectrum of attendees at this event on recent developments in country.

On 19th September, EHAHRDP’s Advocacy & Research Officer John Foley delivered an oral statement  during the adoption of Ethiopia’s Universal Periodic Review. In this statement, EHAHRDP was keen to stress that there is a marked difference between Ethiopia’s commitments ‘on paper’ and the reality for many of the country’s citizens, and especially for human rights defenders and other civil society organisations. I remain of the view that the Human Rights Council should take a more decisive, and public stance, on the worsening human rights situation in the country, especially ahead of forthcoming elections scheduled for May 2015. EHAHRDP intends to continue its long-standing engagement on Ethiopia at the 28th Session of the Human Rights Council in March 2015.

The crisis that has engulfed South Sudan since December 2013 should be understood as both a humanitarian and a human rights catastrophe. The United Nations estimates that over 1.7 million people have been displaced by the violence which has engulfed the country. Untold thousands of civilians have been killed, and four million people are now at risk of famine. And yet, over the course of 2014, the Human Rights Council and its member states have failed to adequately grasp the urgent need to respond to the gravity of the situation, and in a timely manner.

Within this context, EHAHRDP and our close partners Amnesty International supported two South Sudanese human rights defenders to attend this Session, in an effort to engage directly with key international decision makers, and correct (or at least influence) the weak response from the Human Rights Council to the current conflict

Edmund Yakani of CEPO, and Priscillia Nyagoah of South Sudan Law Society were joined as panelists by our own John Foley, in a full-house event moderated by Philippe Dam of Human Rights Watch. Numerous government representatives and diplomatic missions attended the event, and the panelists were able to brief those assembled on a range of issues, including the urgent need for the Human Rights Council to appoint a Special Procedures mandate holder to monitor, document, and report on the worsening human rights situation in the country.

The following day, a Panel Discussion on the Human Rights Situation in South Sudan was convened, at which Edmund Yakani spoke on behalf of EHAHRDP.

I have worked with Edmund and his organization CEPO over the course of several years. In fact, EHAHRDP’s engagement in South Sudan long predates the country’s 2011 independence, and we have continued to support human rights defenders working amidst one of the most hostile and challenging environments in the region.

Prior to the start of the 27th Session, the National Security Service of the Government of South Sudan made concerted efforts to prevent Edmund from traveling to Geneva to brief the UN Human Rights Council. These ‘efforts’ included threats against him and his family members, and a ban on him traveling to Ethiopia (where he would normally have needed to travel to collect his Swiss visa).

Such efforts to silence legitimate human rights defenders are disgraceful, and should not be tolerated by the Human Rights Council or any of its member or observer states. A number of international governments, including the United Kingdom  made strong statements at the panel discussion touching on Edmund’s specific situation, and on the wider challenges facing human rights defenders and those seeking to exercise their right to free expression in the country.

EHAHRDP continues to monitor and document the situation for human rights defenders in South Sudan closely, as well as providing protection interventions to those at risk. In September 2014, EHAHRDP’s John Foley returned to South Sudan to conduct research charting the impact of the current conflict on human rights defenders, and EHAHRDP will be publishing this report later in 2014.

There are justified concerns that South Sudan may be on the precipice of a new wave of fighting. Whilst the interventions needed to address the scale of crisis are many and complex, it is vital that the Human Rights Council recognises its role within the global response. As we look ahead to 2015, urgent steps must be taken towards addressing the human rights situation in South Sudan under Item 4 of the Human Rights Council’s agenda. Urgent steps should also be taken towards tabling a Resolution which would lead to the creation of a Special Rapporteur’s mandate.

On September 24th, EHAHRDP’s John Foley delivered an oral statement during the interactive dialogue with the independent expert on Sudan.

We are extremely concerned by the decision of the Human Rights Council President, on the final day of the 27th Session, to defer the appointment of Special Procedures mandate-holders until October, including the new Independent Expert on Sudan. The gravity of the human rights situation in the country requires urgent action from the United Nations Human Rights Council, and it is essential that this vital mandate be not only renewed without delay, but also strengthened.

On 25th September, I delivered an oral statement on behalf of EHAHRDP during the Interactive Dialogue with the new Independent Expert on the Situation of Human Rights in Somalia, Mr. Bahame Tom Nyanduga.

In our statement, I expressed EHAHRDP’s concern at continuing reports of harassment, intimidation and arbitrary killing of journalists and threats directed at media houses. In the last few weeks, at least 19 media workers, including three prominent journalists of Shabelle Media Network were arrested, pressured to go off air and charged by the office of the Attorney General. In early September, state security forces arrested and arbitrarily detained Hassan Ali Geesey, Director of Radio Dalson for more than 24 hours, jailing him in dangerous and inhumane conditions. The appointment of Mr. Nyanduga as Independent Expert represents a renewed opportunity for the Human Rights Council to refocus its attention on the grave risks facing independent human rights voices in Somalia.

On the final day of the Human Rights Council, I was encouraged to be present for the adoption of two critical Resolutions. The first, on the protection of civil society space, was notable not only for its substantive content, but also for its passage in spite of a number of hostile amendments proposed by a number of member states.

The second Resolution, on human rights, sexual orientation and gender identity, marks a critical development at the UN level. I have written previously on the recent strides made by the African Commission on Human and Peoples’ Rights in 2014 to strengthen the rights of persons based on their real or perceived sexual orientation or gender identity  I am encouraged that similarly progressive moves are now being made at the international level, and congratulate the broad international coalition of NGOs that worked tirelessly towards the adoption of this key Resolution.