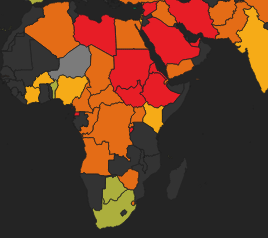 Just three percent of people live in countries where the rights to protest, organise and speak out are respected, protected and fulfilled according to the CIVICUS Monitor, which today releases the first-ever global dataset on the enjoyment of civic space. Of the 195 rated, it finds that civic space in twenty countries – including Eritrea, Ethiopia, Somalia, South Sudan, and Sudan – is closed, a rating characterised by an atmosphere of fear and violence, and severe punishment for those who dare to disagree with authorities.

The CIVICUS Monitor rates countries based on how well they uphold the three fundamental civic freedoms that enable people to act collectively and make change happen: freedom of association, freedom of peaceful assembly, and freedom of expression. Through weekly updates by research partners including DefendDefenders (the East and Horn of Africa Human Rights Defenders), the online platform draws on a global network of grassroots human rights defenders to provide a comprehensive overview of events affecting civic space, making it an invaluable source of information for researchers, journalists, and diplomats.

“As human rights defenders are confronted with an increasingly hostile working environment, perhaps the biggest danger they face is that these creeping trends are not recognised until it is too late,” said Hassan Shire, Executive Director of DefendDefenders. “The CIVICUS Monitor has successfully brought together a global network that tracks the enjoyment of civic space and provides up-to-date, accurate, and verified information directly from the ground to anyone who needs it.”

Through its partnership with the CIVICUS Monitor, DefendDefenders and its research partners have tracked the recent clampdown on rights freedom of peaceful assembly, association and expression in Ethiopia over the past year, documented worrying patterns of attacks against civil society and HRDs in war-torn South Sudan, and provided regular updates on the pervasive and continuing human rights violations in Burundi.

In order to signal trends affecting civic space and to highlight countries of immediate concern, the CIVICUS Monitor today also launched a new Watch List. This advocacy tool highlights up to five countries on the CIVICUS Monitor where there is a serious and rapid decline in civic space that should be given particular attention. Countries on this list today are: Cameroon, Macedonia, Myanmar, the USA and Turkey.

With the first ever global dataset on civic space, the CIVICUS Monitor is able to show that, on average, countries with more open civic space have higher Human Development Index scores, better scores on the Electoral Democracy Index, and better Gini Index scores, which track income distribution.

The CIVICUS Monitor also documents attacks on civil society with updates every weekday.  Analysis of almost 500 updates published over the past four months has found: