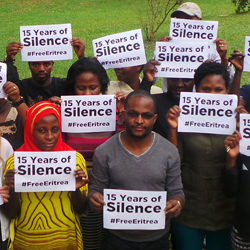 Today, Eritreans in London and Stockholm demonstrate to once again draw attention to the actions of one of the world’s most repressive regimes. Among those protesting are people who have not heard from family members since they were arrested in September 2001. Some are part of a civil society that is now forced to operate in exile. There are no independent journalists or human rights defenders speaking out in Eritrea – all critical voices in the country were silenced exactly 15 years ago.

In May 2001, a group of Eritrean politicians, military officials, and diplomats wrote an open letter to their president. Ten years after emerging as an independent nation, the country stood at a turning point. Under the leadership of President Afewerki, the People’s Front for Democracy and Justice (PFDJ) had grown increasingly authoritarian. The 1997 Constitution had not been implemented, elections had been postponed, and the independent media, only in existence since 1994, was increasingly restricted.

The signatories – now known as the ‘Group of 15’ or simply G-15 – called upon President Afewerki to govern “by the constitution and the law.” Published in local media, the letter asked for “a peaceful and democratic dialogue,” called for free and fair elections, and advocated for an impartial media “to encourage the protection of human rights.” When they found Eritrea at a crossroad, the G-15 chose to peacefully express their concerns. President Afewerki chose to do the opposite.

On 18 and 19 September, eleven members of the G-15 who were in Eritrea were arrested and accused of sharing “a common guilt: at the minimum, abdication of responsibility during Eritrea’s difficult hours, at the maximum, grave conspiracy.”

As the G-15 were rounded up, President Afewerki led a ruthless crackdown on all dissenting voices, banning Eritrea’s independent media. In the days that followed, eleven prominent journalists and editors disappeared into Eritrea’s many prisons. For a decade and a half, those arrested in September 2001 have been held incommunicado, and in that time we have heard little more than rumours about their fate. Since then, many of their family members have been arrested. Others with no association to the journalists have been labelled ‘sympathisers’ and faced persecution, often just for asking about the events.
buy strattera generic rxbuyonlinewithoutprescriptionrx.net/strattera.html over the counter

Human rights violations had been documented since Eritrea first emerged as an independent country in 1991, but as the Commission of Inquiry on Eritrea noted in its 2015 report “The 2001 crackdown ended any opportunity for overt political debates on state building in Eritrea. All voices susceptible to challenge the Government had been silenced, either directly through arrests and disappearances or indirectly through fear.”

Based on scattered testimony by Eritreans that fled over the years, it is now believed that nine of the eleven G-15 members, and at least four of the journalists imprisoned in 2001 have died during their internment. At times, there have been signs of hope. In July, Eritrea’s Foreign Affairs Minister claimed in an interview that Dawit Isaak, a prominent journalist and playwright, whose death has been reported on several occasions throughout the years, is still alive. However, with the government refusing to provide access to the prisoners’ lawyers or family, we simply do not know the truth.
buy sertraline generic rxbuyonlinewithoutprescriptionrx.net/sertraline.html over the counter

Nevertheless, Eritreans committed to the principles of universal human rights have never given up hope. Instead, human rights defenders have formed an innovative civil society in exile that continuously explores new ways to reach and help those living inside the country. The reality, however, is that President Afewerki’s regime continues to commit gross human rights violations with complete impunity.

In a country where the simple act of independent thought is met with repression, anyone who speaks out becomes a human rights defender. Since its establishment in 2005, my organisation has stood by those voices that have spoken out on violations perpetrated by President Afewerki’s regime, and it will continue to do so until they achieve justice, and are able to freely and peacefully work towards the fulfilment of Eritreans’ rights.