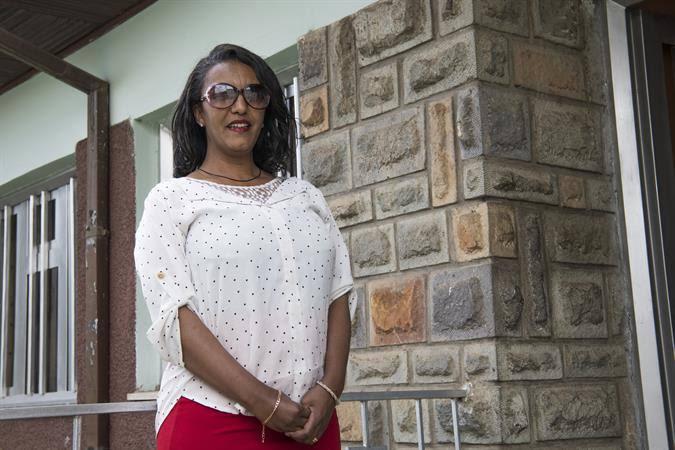 10 years ago, Dibaba founded the Ethiopian Women with Disabilities National Association (EWDNA), with a primary aim of securing social recognition and legal protection for women with disabilities in Ethiopia.

“Disabled women face several challenges. First, socially, they’re discriminated against because of the enduring negative attitude towards people with disabilities (PWDs). This extends to state institutions where PWDs are perceived as receivers of charity and not like any other people entitled to necessary social services from the state or full protection of the law,” she says

Today, EWDNA represents over 10000 women with various disabilities across Ethiopia, providing a whole range of services.

“First, we offer psycho-social support, mainly group and individual counselling to make sure women have the confidence to leave their homes. We also provide vocational training, so women with disabilities can make their own living. We raise awareness of living with a disability and last, we lobby the government to increase the legal protection for women with disabilities as well as increase accessible infrastructure,”

Through sustained advocacy, EWDNA managed to get the Ethiopian government to ratify the United Nations Convention on the Rights of Persons with Disabilities (CRPD). Still, Dibabe says a lot remains to be done, especially regarding developing a legal regime that is sensitive to the unique plight of women with disabilities.

“For example, if a woman with a visual impairment is raped, they are still required to provide witnesses. This is a challenge bordering on abuse. The criminal laws need to be amended,”

With COVID19 and the associated countrywide lockdowns, Dibabe says the challenges for women with disabilities have been exacerbated.

“Women with disabilities survive on informal economic activities like selling lotteries, soaps, and candles in churches. But when lockdowns were imposed, markets, schools and churches closed, including other small businesses, which affected their members economically,” she explains.

For Ethiopian women with disabilities, this challenge was worsened by the ongoing conflict in Tigray, which has spilled over to other parts of the country. Dibabe says because of their various handicaps, PWDs often fall victims in large numbers to conflicts because they cannot escape as easily and swiftly as their able-bodied counterparts.

Still, Dibabe remains optimistic that with constant engagement and advocacy, life will keep getting better. “Today is better than yesterday,” she says.