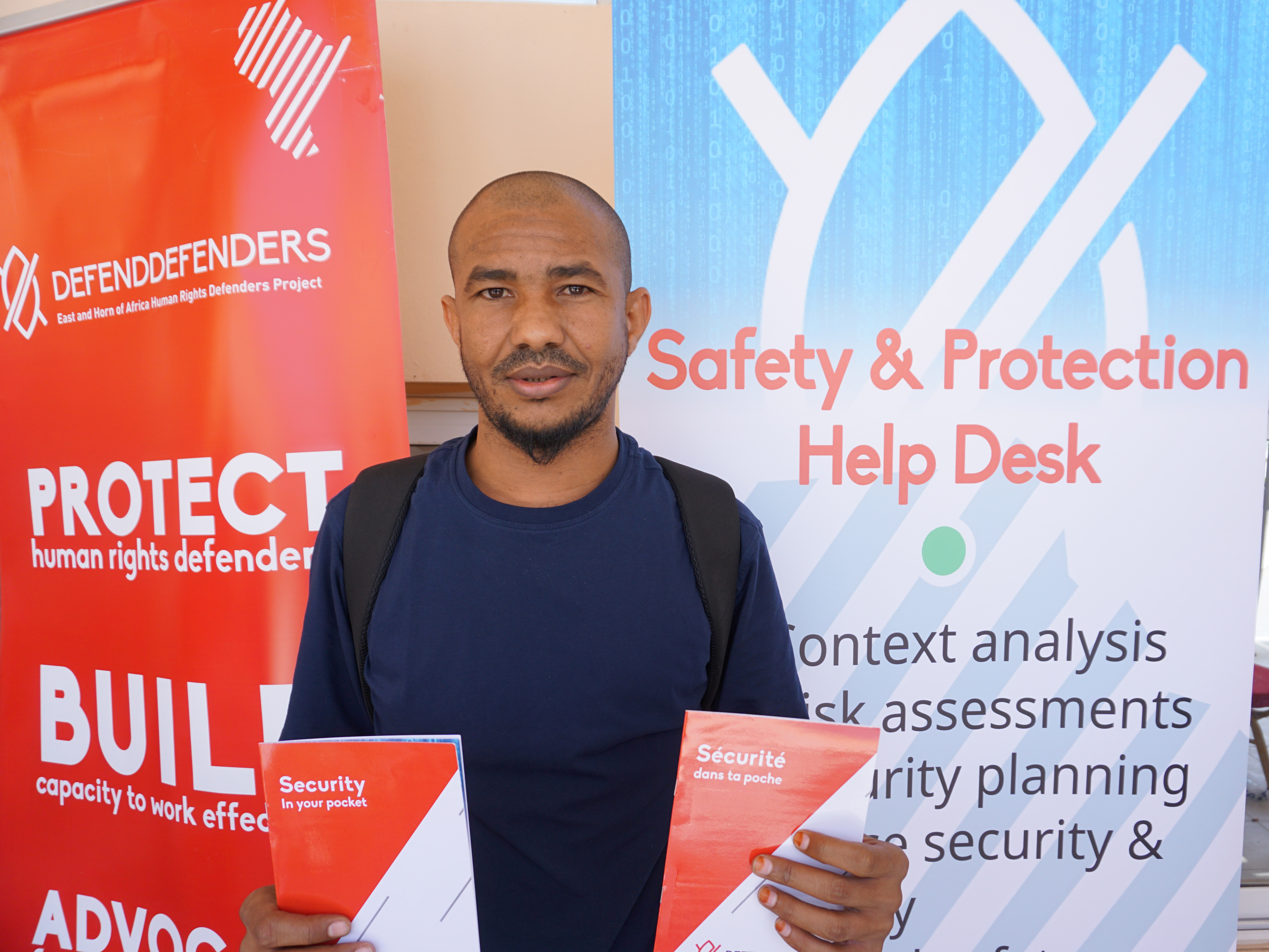 From 20 April to 1 May 2018, DefendDefenders led a delegation of seven members to the 62nd Ordinary Session of the African Commission on Peoples’ and Human Rights (ACHPR) in Nouakchott, Mauritania. These HRDs, representing Uganda, Sudan, South Sudan, and Eritrea, used the opportunity to discuss the state of human rights across the sub-region and outline solutions to ongoing violations.

Although there have been some positive developments in the sub-region, notably in Somalia, space for human rights defenders (HRDs) in the East and Horn of Africa remains extremely limited. DefendDefenders used the session to highlight worrying trends such as attacks against HRDs, and violations of the freedoms of association, expression, and peaceful assembly. In an oral statement to the Commission, DefendDefenders also drew particular attention to the collapse of civic space in South Sudan and Burundi, as well as the worrying trends in Ethiopia, Kenya, and Tanzania where violations against journalists and HRDs have become increasingly common with little accountability.

Throughout the three-day NGO Forum preceding the ACHPR session, DefendDefenders hosted a Physical and Digital Safety Clinic, offering advice for organisations and HRDs to mitigate the risks they face because of their work. DefendDefenders also distributed copies of “Security in Your Pocket,” summarising essential practices outlined in our “STAND UP!” security manual.

During the forum, the Pan-African Human Rights Defenders Network cosponsored two panels. The first, exploring African perspectives on access to remedy, focussed on HRDs working on business and human rights. Panellists presented documented cases violations against HRDs and discussed the governance of the extractives industry, challenges faced by local communities, and the situation of HRDs in general. PAHRDN and its partners, also organised a separate workshop on business and human rights to share challenges and best practices, whose conclusions will be presented at the UN Forum on Business and Human Rights in November 2018.

The second panel, held jointly with REDHAC focused on the concept of the Ubuntu Safety Hub Cities, highlighting the specific challenges faced by women HRDs. The panel brought out a powerful testimony of Barrister Balla Agbor from Cameroon, who was held incommunicado for months after calling for changes to the judiciary system. The feedback on the operationalization of the Hub Cities will be used to further strengthen these African protection mechanisms.

Finally, DefendDefenders used the Forum to launch its new campaign asking people why #WeDefend #OurRights, to mark the 20th year anniversary of the UN Declaration on Human Rights Defenders.

On 25 April, DefendDefenders hosted a side event and panel discussion to highlight civil society’s role in the peace process in South Sudan, and provided a forum for attendees to pose questions and present their own views on the situation in the country. With human rights violations and attacks against HRDs, journalists, and aid workers taking place with impunity, the panellists discussed strategies to keep up their work in a context where protection mechanisms remain woefully inadequate. DefendDefenders also used this opportunity to launch its new report, “This is our Freedom. These Are Our Rights: Human rights defenders in South Sudan since July 2016,” which features findings and recommendations based on a research mission to Juba in April 2018. Speakers at the event included South Sudan Human Rights Commissioner Beny Gideon Mabor, Advocate Ajo Noel Julious Kenyi, Martha Tukahirwa with the Strategic Initiative for Women in the Horn of Africa, and David Meffe from DefendDefenders.

Despite the damning findings from the UN Commission of Inquiry on Eritrea, the UN Special Rapporteur on Eritrea, and decisions by the ACHPR, human rights violations continue to be rampant in the county. Eritrea’s first state report, submitted during the 62nd session offers little hope that the government is willing to take any meaningful action toward justice and accountability. On 26 April, DefendDefenders co-hosted a panel discussion on Eritrea with Amnesty International where panellists and attendees discussed ways to keep Eritrea’s human rights violations in the international spotlight, as well as methods to continue advocacy efforts and mitigate the country’s harsh restrictions on freedom of expression, association, and peaceful assembly. Panellists included Frans Viljoen from the Centre for Human Rights, Ibrahim Hamid with the Eritrean Lowlanders League, Selam Kidane from Stop Slavery Campaign/Freedom Friday, and Japhet Biegon with Amnesty International.

The ongoing crisis in Burundi has had a deep impact on HRDs and civil society. In the last three years we have received over 260 protection requests from the country, and our advocacy department has supported HRDs to engage with the ACHPR and UN Special Mechanisms as part of their work to end the violations and hold the perpetrators to account. We welcome the resolution adopted by the Commission, expressing its deep concern over the lack of investigation into alleged violations and the government’s refusal to cooperate with international efforts towards that goal. The resolution also calls on the East African Community and Peace and Security Council of the African Union to take appropriate measures to ensure an inclusive dialogue based on the Arusha Agreement. Considering the developments since 2015, a strong African-based initiative is essential toward ending the current crises.

The Commission provides a unique opportunity for civil society to engage with key stakeholders and strengthens solidarity among the African human rights community. To this end, the delegation also used the opportunity for private advocacy meetings and networking with other organisations from across the continent to share challenges and strategies. DefendDefenders also welcomes the ACHPR’s adoption of the Guidelines on Access to Information and Elections in Africa as another progressive step by the Commission towards free expression and information.