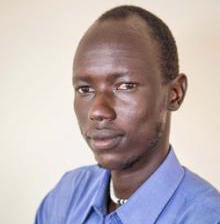 South Sudan: Journalist killed amidst resurgence of violence in Juba

Gatluak, who worked as a station coordinator and reporter with Naath FM in Leer, was killed on 11 July at the Terrain Hotel in Juba, and it is believed his targeting was ethnically motivated. According to his family’s representative, he and his colleagues were attacked at their work place, but only he was shot dead after being identified as a member of the Nuer tribe.

He had recently started managing a network of community radio stations across the country in partnership with Internews.
buy premarin online medstaff.englewoodhealth.org/wp-content/languages/new/premarin.html no prescription

Nigel Ballard, Internews Director of Community Radio, remembered John as “a heroic reporter and a leader, widely loved and embraced in his community.”

“Journalists like John Gatluak are courageous human rights defenders who are committed to reporting on one of the world’s most brutal conflicts, and whose dedication places them directly on the frontlines, and at times in the crossfire of the war,” said Hassan Shire, Executive Director of DefendDefenders. “The people of South Sudan deserve peace, security and stability after living through decades of war, which will only be achieved when perpetrators of these heinous crimes are brought to account.
buy ventolin online buy ventolin no prescription

Since the formation of the TGoNU on 29 April 2016, over 10 civil society activists and journalists have reportedly been arrested, and the latest surge in violence has forced many into hiding.

Fighting broke out in Juba between Sudan People’s Liberation Army (SPLA) and SPLA in Opposition (SPLA-IO) soldiers on 7 July. Over the past week, hundreds of people have been reportedly killed, and according to the United Nations, at least 42,000 people have fled their homes. On 11 July, President Salva Kiir called for and Vice-President Riek Machar approved a cease-fire, which appears to be holding. Since then, Amnesty International has reported that South Sudanese men are being deliberately prevented from leaving the country.

DefendDefenders has documented the increasingly dangerous landscape for journalists, and human rights defenders more broadly, since the outbreak of the conflict in December 2013. The situation in South Sudan has dramatically deteriorated, and become one of the worst human rights and humanitarian crises in the world today. Unprecedented levels of violence have seen indiscriminate killings, rape, sexual violence, abduction, destruction of properties and the recruitment of children.