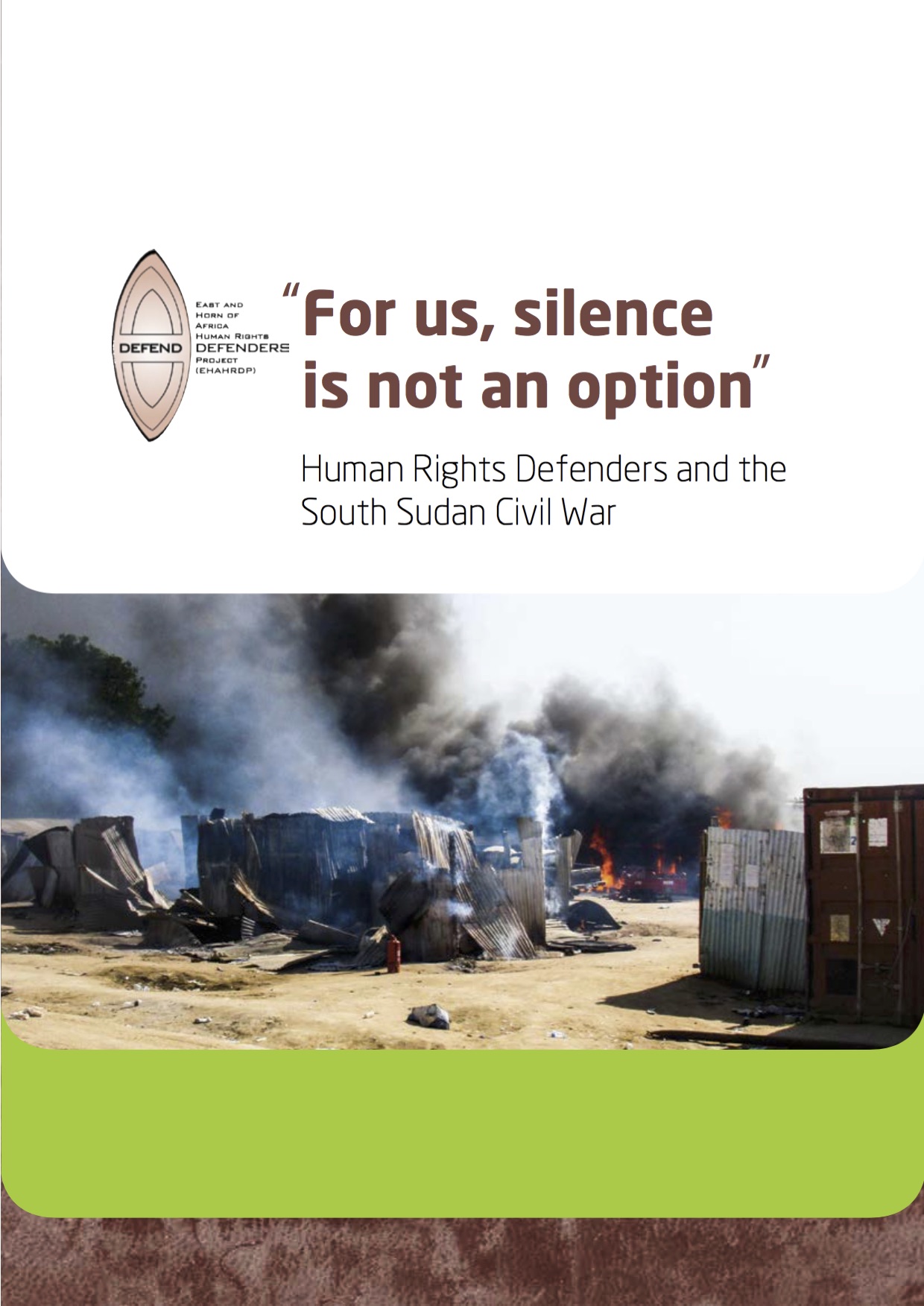 Throughout 2014, human rights defenders in South Sudan have borne the brunt of a renewed government clampdown, finds a new report published today by the East and Horn of Africa Human Rights Defenders Project (EHAHRDP). The report, entitled “For Us, Silence is Not an Option: Human Rights Defenders and the South Sudan Civil War”, documents a worsening pattern of harassment, intimidation, threats, and legislative reforms, all targeting South Sudanese human rights defenders.

Since December 15th 2013, South Sudan has been engulfed by a humanitarian and human rights crisis. The Government of South Sudan has instrumentalised the conflict as a pretext to silence critical and independent human rights voices within the country. Through its various security organs, the government has stepped up the harassment and intimidation of human rights defenders. The government has attempted, through a combination of existing and new tactics, to stifle civil society’s ability to monitor, document, and report on the current crisis, as well as on existing and entrenched human rights concerns.

“Throughout 2014, human rights defenders in South Sudan have faced attack from every conceivable angle”, said Hassan Shire, Executive Director of EHAHRDP. “Routine harassment and intimidation from state security agents has been matched by legislative reforms that seek to increase government control over the NGO sector. It is imperative, given the wider humanitarian, political, and military crisis in the country that the government takes urgent steps to reverse this alarming trend. ”

EHAHRDP’s new report serves as an addendum to it’s December 2013 publication, “Change will not come until we talk about reality: The Closing Space for Human Rights Defenders in South Sudan”. That report, based on three years of research, detailed the worsening risks facing journalists, civil society organisations, lawyers, and other actors involved in the promotion and protection of human rights in South Sudan.

Throughout 2014, the government of South Sudan, through its National Security Services, has stepped up its efforts to silence independent human rights voices and exert control over civil society more broadly. “The operating environment for human rights defenders and civil society in South Sudan continues to shrink”, said Edmund Yakani, Coordinator of the South Sudan based ‘Community Empowerment for Progress Organisation’ (CEPO). “It is essential that the government, and all its security agencies, take urgent steps to ensure that the harassment and intimidation of human rights defenders ceases”. CEPO serves as EHAHRDP’s focal point organisation for South Sudan.

EHAHRDP sets out a number of concrete recommendations to the Government of South Sudan and its international partners to improve the operating environment for human rights defenders, and ensure their safety.

The East and Horn of Africa Human Rights Defenders Project is a Kampala-based organisation that since 2005 has worked to protect and promote the work of human rights defenders in Burundi, Djibouti, Eritrea, Ethiopia, Kenya, Rwanda, South Sudan, Somalia (including Somaliland), Sudan, Tanzania, and Uganda.

To access EHAHRDP’s December 2013 report, “Change will not come until we talk about reality: The Closing Space for Human Rights Defenders in South Sudan”, please visit: