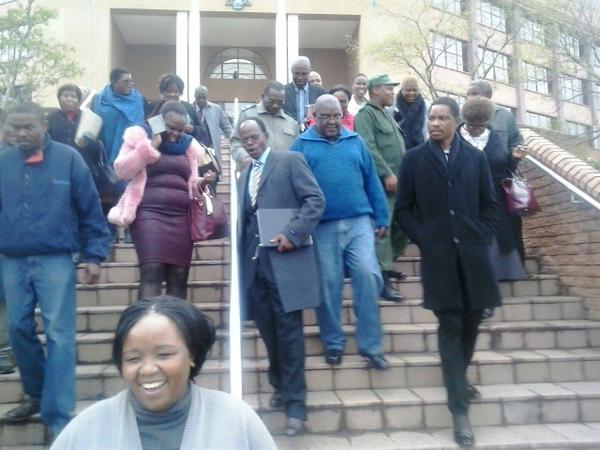 The Pan-African Human Rights Defenders Network (PAHRDN) welcomes yesterday’s decision by the Supreme Court of Swaziland to order the immediate release of Mr. Thulani Maseko and Mr. Bheki Makhubu, after over 15 months in detention.

Mr. Maseko, a human rights lawyer, and Mr. Makhubu, a journalist and editor of independent national news magazine The Nation, were arrested on 17th March 2014, in response to articles published in The Nation. In July 2014, both were sentenced to two years’ imprisonment, on contempt of court charges linked to the articles, which criticised Swaziland’s then Chief-of-Justice. Both were reportedly released after an appeal against their convictions went unchallenged by Swaziland’s Directorate of Public Prosecutions.

Swaziland exists as an absolute monarchy, in which the King has the power to suspend or otherwise curtail basic civil and political rights, including the right to freedom of expression. Prior to his arrest in March 2014, Mr. Maseko had previously been charged with sedition on the basis of his public statements.

“I am delighted by the news of Mr. Maseko and Mr. Makhubu’s release, and extend my thanks to our partners across the continent- and the world- who advocated tirelessly for their release”, said PAHRDN’s chairperson, Hassan Shire. “Mr. Maseko and Mr. Makhubu were deprived of their liberty for over 15 months, simply for exercising their right to freedom of expression. We hope that their release signifies a positive step forward for judicial independence and the rule of law in Swaziland”.

The PAHRDN urges the Swazi authorities to pay adequate and prompt compensation to Mr. Maseko and Mr. Makhubu for their wrongful imprisonment, in line with the June 2015 opinion delivered by the United Nations Working Group on Arbitrary Detention.

Sudan: A united front is needed to save the democratic transition and protect human rights

A united domestic, regional, and international front is needed to

Reflections on the 48th session of the UN Human Rights Council