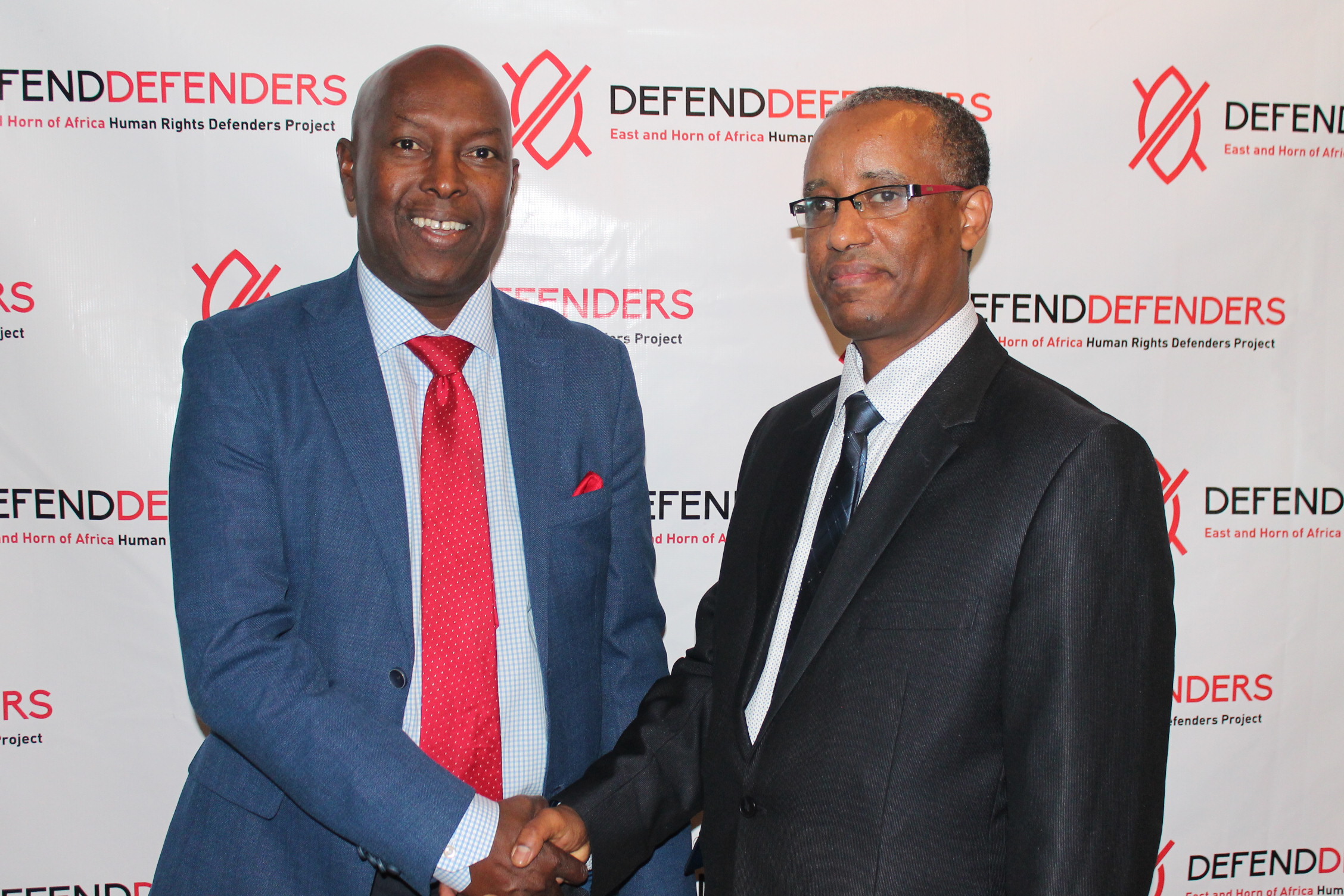 In celebration of Human Rights Defenders Day (9 December) and International Human Rights Day (10 December), DefendDefenders and more than 60 human rights defenders (HRDs) gathered in Addis Ababa, Ethiopia on the occasion of the 2019 edition of DefendDefenders’ annual flagship event, Claiming Spaces: Tactical Tools for Human Rights Defenders (9-13 December 2019). The forum provided a platform for Ethiopian HRDs to meet, network, celebrate their achievements, occupy newly open spaces at the national level, and build their capacity to conduct their work and protect themselves, including through enhanced physical and digital security.

The opening ceremony of Claiming Spaces, held on the 21st anniversary of the UN Declaration on Human Rights Defenders, was an opportunity to celebrate, and reflect on, the progress witnessed in Ethiopia over the last 20 months. It opened with Memory Bandera, Director of Programs and Administration at DefendDefenders, who presented the history of Claiming Spaces; Biniam Abate, Executive Director of the Ethiopian Human Rights Council (HRCO), who said that holding this important event in Ethiopia meant a lot as Ethiopia has embarked on a path to democracy and respect for human rights; Annika Nordin Jayawardena, Deputy Head of Mission and Head of Development Cooperation at the Embassy of Sweden in Ethiopia, who said she was humbled to stand in front of a crowd of Ethiopian HRDs and praised the opening of the democratic space; and Thijs Woudstra, Deputy Head, Embassy of the Netherlands in Ethiopia, who highlighted that the opening of Claiming Spaces was a historic day for HRDs in Ethiopia.

In his address, Hassan Shire, Executive Director of DefendDefenders, praised Ethiopian HRDs, including HRCO that continued its work over the years despite the challenges: intimidation, threats, smear campaigns, arrests, detentions, and attacks. It is amazing to be able to say: “Now we are here!” Hassan Shire also praised activists who are returning from exile and civil society’s new ability to hold events openly in Ethiopia. However, he expressed concern over forces that are trying to derail the process, using ethnicity to incite violence.

Lastly, Daniel Bekele, Chief Commissioner at Ethiopia’s Human Rights Commission, said that holding this conference in Ethiopia was a sign of changing times. “It’s been a long journey to today; we lost friends along the way, and others suffered lasting trauma and injuries.” He stressed the need to acknowledge the work of HRCO and Ethiopian HRDs, as well as of supporters and friends like DefendDefenders and warned of the need to guard against any reversal of recent gains.

Throughout the week, Ethiopian HRDs reflected on their strengths, challenges and needs, and DefendDefenders facilitated group discussions and provided trainings on risk assessment and security (both physical and digital), self-care/well-being, documenting and reporting human rights violations, strategic advocacy and communications, and fundraising and resources mobilisation.

On the opening day of Claiming Spaces 2019, DefendDefenders also launched a new report, entitled Navigating Justice: Lawyers as Human Rights Defenders in Ethiopia and Somalia/Somaliland. In this report, DefendDefenders examines the work of lawyers to identify their roles, best practices, vulnerabilities, and needs. Lawyers often act as the first line of defence against human rights abuses by ensuring that citizens access justice, victims enjoy effective remedies, and defendants face justice in an environment in which due process and fair trial standards are respected.

Navigating Justice outlines avenues governments, donors, and non-governmental organisations can take to help effectively promote the work of lawyers, such as capacity-building activities, and areas of immediate focus like psychosocial support. DefendDefenders calls for the recognition of the crucial role played by lawyers. They exert social change by promoting ideas, influencing values, and triggering change in people’s behaviour over time. They are agents of change, and this holds even more true in the Horn of Africa.

The findings of this report and DefendDefenders’ earlier report, Turning the Page: Rebuilding Civil Society in Ethiopia, were discussed in a panel discussion highlighting the manifold and complex realities of HRDs. Among the key issues discussed was the plight of women human rights defenders (WHRDs) with Adwoa Kufuor, Regional Advisor on Gender and Women’s Rights at the Office of the UN High Commissioner of Human Rights (OHCHR), stressing that “women are still extremely marginalised, and we need to do more to protect them.”

The launch of Claiming Spaces 2019 coincided with the end-of-mission statement the UN Special Rapporteur on freedom of opinion and expression, David Kaye, published at the conclusion of a historic official country visit to Ethiopia. He also saluted progress and highlighted concerns ahead of the 2020 elections. A number of Ethiopian HRDs met with the Special Rapporteur and provided him with information ahead of, and during, his visit.

On the final day of Claiming Spaces 2019, HRDs and organisations decided to launch a countrywide network of individuals and organisations, the Ethiopian Human Rights Defenders Coalition, with the aim of working together to create a safe and enabling working environment for HRDs in Ethiopia, protect HRDs at risk, and actively engage with national, regional and international human rights bodies and mechanisms.