The African Commission on Human and Peoples’ Rights (ACHPR) concluded its 59th session on 4 November 2016, with the adoption of 10 resolutions. Among other decisions, the ACHPR considered fifteen communications, granted observer status to six NGOs, and considered the adoption of draft principles and the Operational Standards for Policing of Assemblies by Law Enforcement Officials in Africa, as well as the draft guidelines on Freedom of Association and Assembly in Africa.

DefendDefenders supported a delegation of human rights defenders (HRDs) from Burundi, Ethiopia, Eritrea, and Uganda who raised their concerns through advocacy with Commissioners, by speaking on panels, and by engaging with national governments and fellow civil society actors.

In our bi-annual submission to the ACHPR, we highlighted the human rights situation and country specific challenges in the East and Horn of Africa, and called for action on the worsening crises in Burundi and Ethiopia. We are pleased that this call was heeded by the ACHPR, and that two strong resolutions were adopted to that effect.

In September 2016, the ACHPR expressed concern for the human rights situation in Ethiopia where over 800 people are reported to have been killed since protests first broke out in the Oromia region in November 2015. Building on this momentum, DefendDefenders supported the adoption of a resolution condemning the deteriorating human rights situation in the country, calling for an impartial investigation to ensure that the perpetrators of the violations are prosecuted in accordance with the law and ensuring access to conduct a fact-finding mission.

In Burundi, grave violations including arbitrary arrests, torture, disappearances and targeted killings allegedly perpetrated by security forces and the Imbonerakure are reported by local rights groups in exile on a daily basis. In October alone the Burundian government deregistered five civil society organisations, suspended relations with the UN Office of the High Commissioner for Human Rights (OHCHR), and declared the three experts of the United Nations Independent Investigation on Burundi persona non grata. In response to the deteriorating situation, we supported the adoption of a strong resolution calling on Burundi to extend full cooperation with all regional and international human rights institutions, including the OHCHR and the African Union.

We further called on all member States of the African Union to ensure the protection of HRDs, notably by observing the African Charter on Human and Peoples’ Rights to which all of the countries in the sub-region are now signatories, South Sudan having ratified it only a few months ago.

Meanwhile, the dire human rights situation in Eritrea remains unaddressed, despite the publication of the UN Commission of Inquiry in May 2015 accusing the government of Eritrea of committing crimes against humanity. Despite the ongoing severity of the situation, the ACHPR has not passed any resolution on human rights in Eritrea since its 38th ordinary session in November 2005. During the session DefendDefenders co-organised a side-event on the situation in the country, conducted advocacy in support of the COI’s call for the African Union and the ACHPR to work towards establishing an accountability mechanism for the violations, and urged the Commission to refer Eritrea to the African Union Executive Council for failure to comply with its decisions and recommendations.

In the last year, governments across the continent have increasingly turned to limiting internet access in attempts to stifle the free flow of information. Along with the Pan Africa Human Rights Defenders Network, DefendDefenders organised a side-event on internet freedom in Africa to highlight this and other challenges and discuss the growing role played by online activism and social media to shine light on human rights violations. We welcome the ACHPR’s resolution on freedom of information and expression on the internet in Africa, which recognises the role of the internet in advancing human rights, urges States to guarantee, respect, and protect internet freedom, and encourages the revision of the Declaration of Principles of Freedom of Assembly to consider internet rights.

Side events at the ACHPR

Through parallel events, we aim to highlight country or thematic areas to inform the main agenda of the ACHPR. The events provide an opportunity for HRDs to discuss such issues in detail and contribute to the main discussions. At this session, we organised three events in collaboration with our partners.

This was an opportunity to examine restrictions on the right to peaceful assemble and work in association in Ethiopia, South Sudan, Sudan, Tanzania, and Uganda, and identify how the best practices provided in the report of the study group on freedom of peaceful assembly and association can be concretely applied to contexts where these freedoms are regularly and systematically curtailed. The side-event also informed the participants on the status of the draft Guidelines on Freedom of Assembly and Association, which were considered by the Commission and referred to the extraordinary session in February for deliberation. 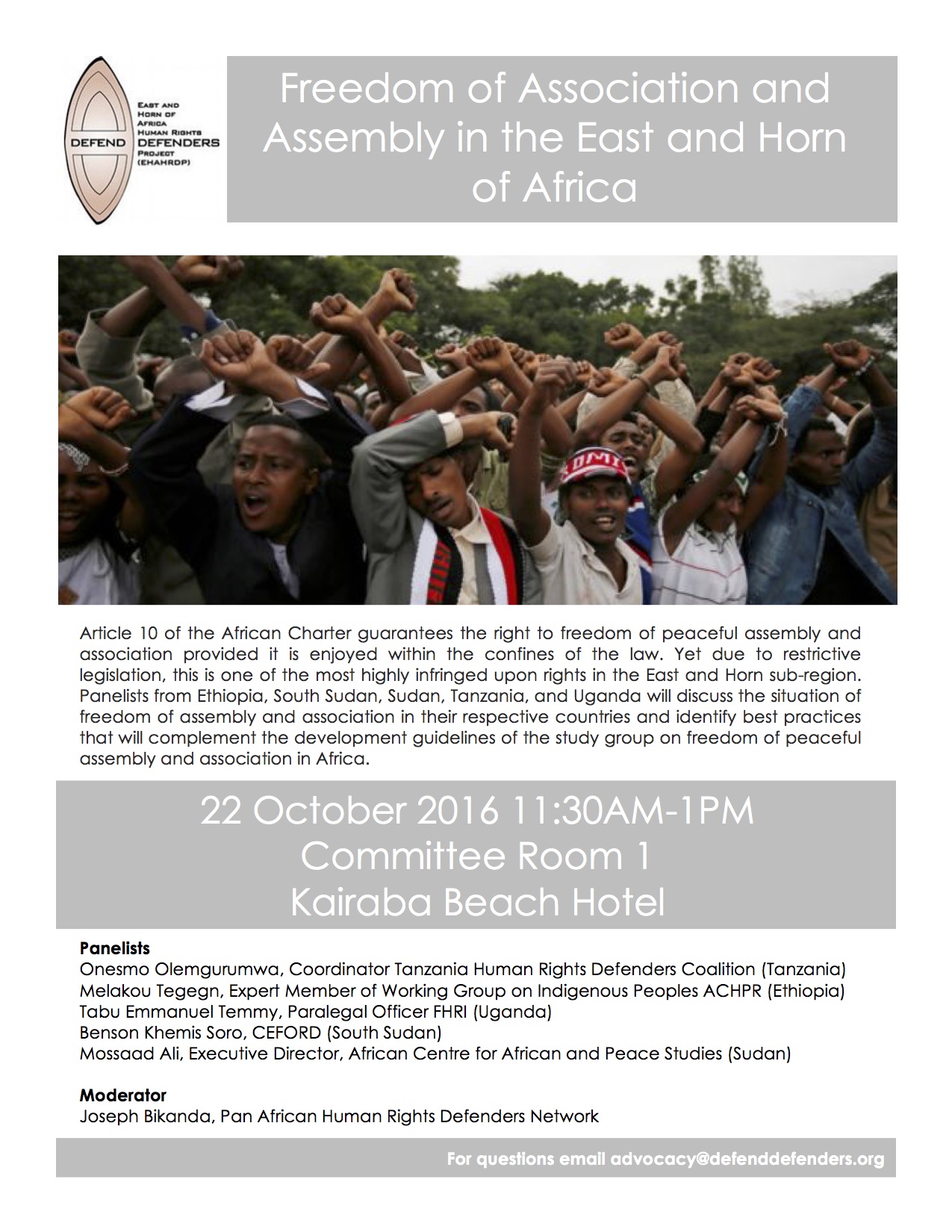 Accountability for grave and systematic rights violations in Eritrea

During the event, panelists gave an overview of indefinite national service’s impact on Eritrean youth, the continuing clampdown on free press, and the recommendations made in the UN Commission of Inquiry, and discussed the opportunities for accountability within the African human rights system. Hon. Med Kaggwa, Commissioner in charge of Eritrea, and the Eritrean delegation attended the event and were able to engage in a meaningful dialogue with the HRDs present.

Government on the continent are increasingly infringing upon Internet freedom through restrictive cyber-security laws, digital surveillance, the suspension and blocking of websites, blocking of social media and mobile applications, and at times the shutdown of the internet at large for prolonged periods of time. This event discussed the impact of these restrictions on the work of HRDs, shared best practices and lessons learned from Burundi, Swaziland, and Tanzania, and made recommendations to the ACHPR on promoting and protecting the right to internet freedom. 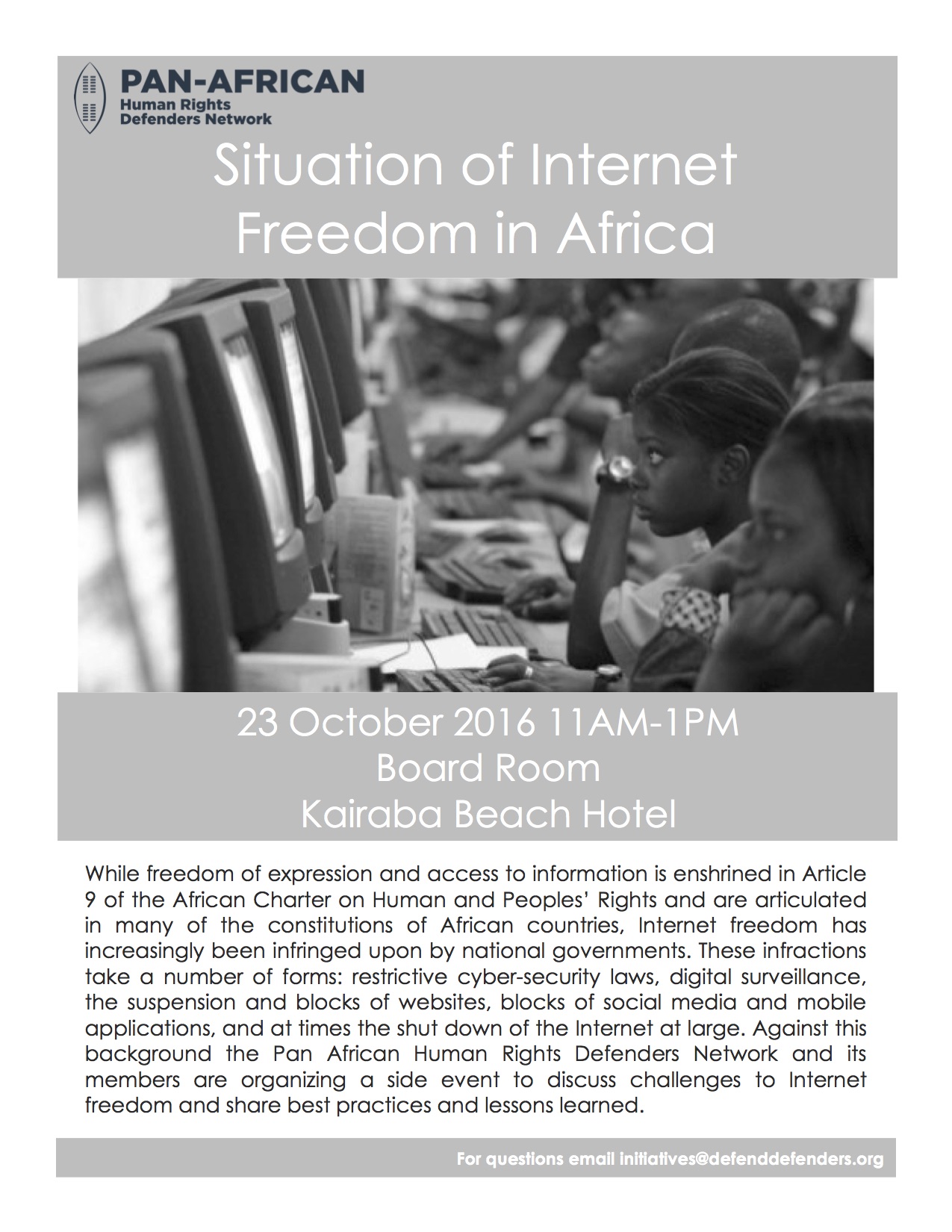