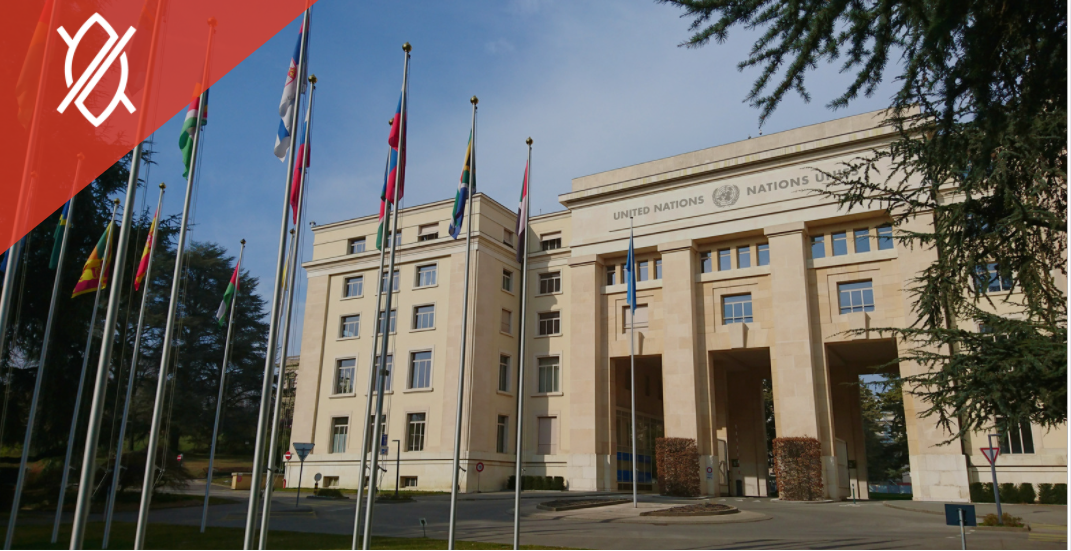 After two years of online and hybrid sessions, we finally resumed in-person advocacy at the Human Rights Council. The Council’s 50th session (13 June-8 July 2022) marked a full return of DefendDefenders’ staff and partners at the Palais des Nations to engage states and other stakeholders.

During the first week of HRC50, with our Representative to the UN, Nicolas Agostini, I met with state representatives, UN officials, independent experts, and civil society partners. We held in-depth discussions about issues affecting human rights defenders (HRDs) in the East and Horn of Africa sub-region and globally. Over the session’s four weeks, our teams held over 100 meetings. We are happy to have fully re-established a rapport with many states’ permanent missions in Geneva and to have established contacts with new states, including African states and Small Island Developing States (SIDS).

During the second week, I was joined by  three colleagues: woman rights defender Achol Bark, Majid Maali (DefendDefenders’ focal person on Sudan), and our Advocacy Manager, Estella Kabachwezi, to conduct advocacy on Sudan, both for this session’s resolution (see below) and as part of a longer-term strategy. During the third week, colleagues from Defenders Coalition Kenya, Gloria Madegwa and Kamau Ngugi, travelled to Geneva to meet with UN officials, special procedures, and other stakeholders to raise awareness of the situation of HRDs in Kenya, as well as the climate ahead of the country’s elections scheduled for August 2022. We were also proud to have Richard Lusimbo with us in Geneva to advocate for a resolution on sexual orientation and gender identity (SOGI).

We held two side events, on peaceful protests and Sudan respectively, and delivered eight oral statements (with the help of six different speakers).

On Sudan, our efforts at HRC50 followed the efforts we deployed to shed light on the situation in the country since the military coup of 25 October 2021. This also follows DefendDefenders’ long history of work on the country. Ahead of HRC50, we coordinated civil society engagement, in particular through a joint letter. During the session, we pushed states to develop and adopt a resolution that ensures continued public debates (“interactive dialogues,” in the Council’s terminology) on Sudan in 2023. This will contribute to keeping human rights at the centre of public discussions and Sudan’s transitional process.

Negotiations took place as Sudan’s repression of those peacefully demanding a return to civilian rule intensified. States finally did the right thing, and Sudan’s de facto authorities faced pressure to accept the resolution by consensus (without a vote). Read our press release on the need for long-term scrutiny of Sudan.

Since Djibouti and Somalia dropped their “pen-holding” role for resolutions on Eritrea, in 2019, a group of states, and then the European Union, took up the initiative. The resolutions presented in 2019, 2020 and 2021, however, were concise and technical: they aimed to renew the Special Rapporteur’s mandate. We are glad that following our and partners’ advocacy, this year’s resolution is more substantive. In addition to extending the Special Rapporteur’s mandate, it addresses key areas of reform for Eritrea. Read our take on the step taken by the Council.

Resolutions on Burundi and Ethiopia will be up for consideration in September, during the Council’s 51st session (HRC51). For the time being, we welcome new experts, namely the Special Rapporteur on Burundi and members of the International Commission of Human Rights Experts on Ethiopia (ICHREE). Read our oral statements, which also covered the Universal Periodic Reviews (UPRs) of South Sudan, Sudan, and Uganda.

Lastly, amidst a polarised environment marked not only by Russia’s aggression against Ukraine, but also by attacks on universal human rights, the Council adopted important resolutions on women’s and girls’ rights, peaceful protests, and SOGI (renewing the mandate of the UN Independent Expert). In this regard, read the letter endorsed by over 1,000 civil society organisations.

In September, during HRC51, we will again be in Geneva for advocacy on our mandate countries. We will focus on resolutions addressing the human rights situation in Burundi, Ethiopia, and Somalia. We will also fully invest in the 73rd public ordinary session of the African Commission on Human and Peoples’ Rights (ACHPR), which will resume its in-person sessions in Banjul, The Gambia, in October 2022.

Oral statements to the Council 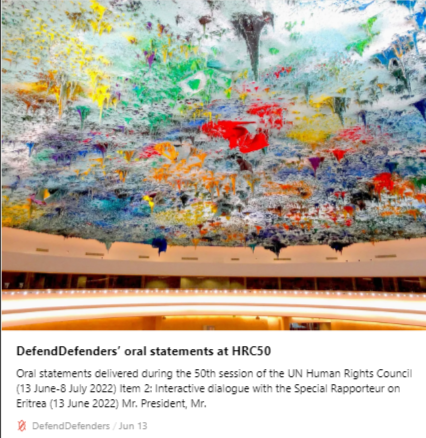 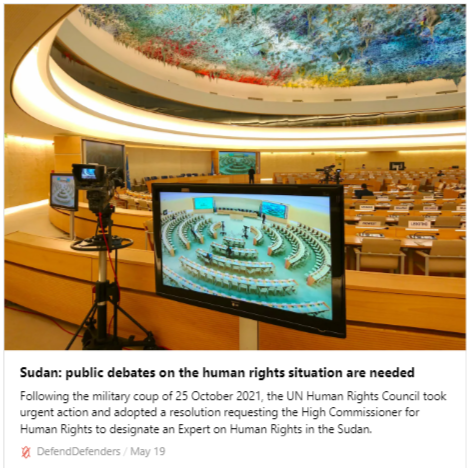 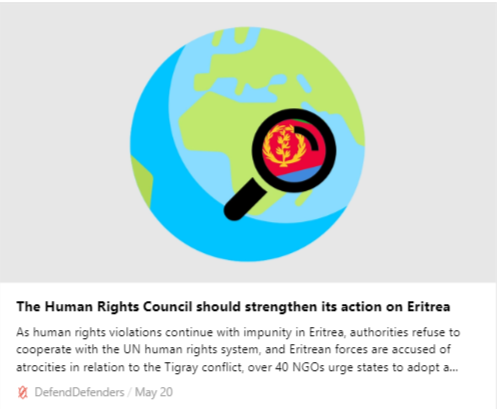 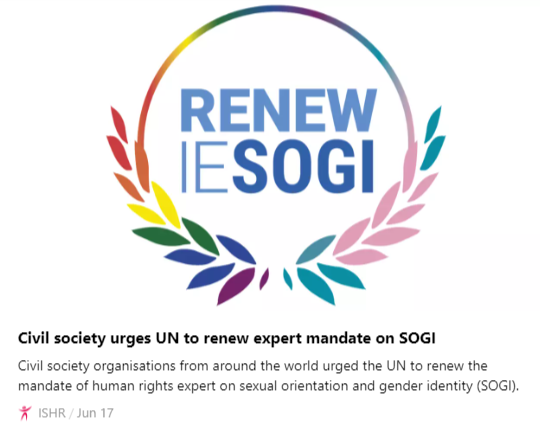 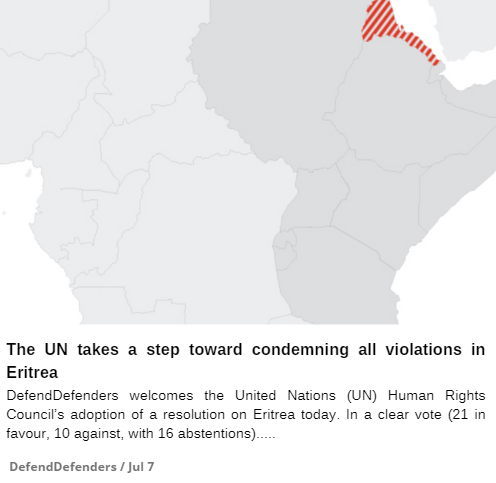 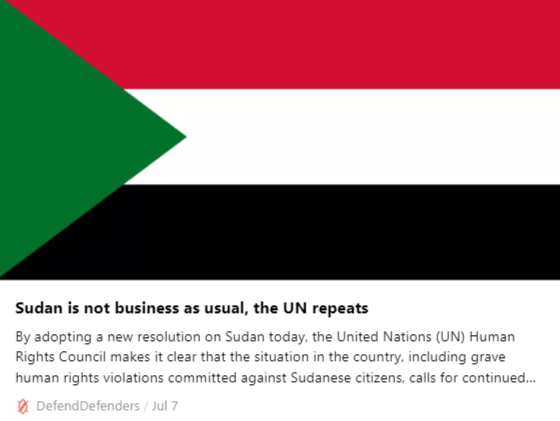 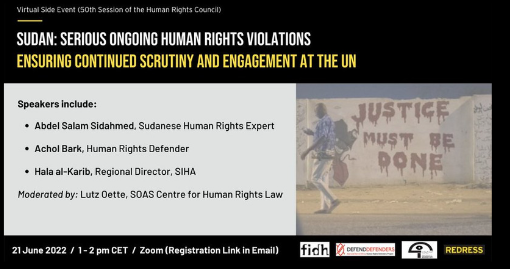